The latest installment of The Crystal Capers [see previous episodes here] features the most cavalier treatment of the Coaches Trophy yet: Stacking it on top of watermelons at the Ag Market. Act like you’ve been there before and have trophies to spare, am I right? Speaking of the Ag Market, here’s a video about the […] 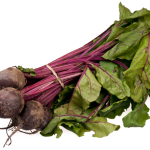 Auburn is going to beet Kansas State. That’s just what the Auburn Tigers do–win or lose (and its mostly win), Auburn will beet you. From the Wall Street Journal: Before each game, between team warm-ups and the opening kickoff, Auburn’s staff distributes small pouches of beetroot concentrate. The players swirl the beetroot crystals around their […]

Stealing crystal footballs, scaring the bejeezus out of college students… it’s amazing what you can get away with if you’re in costume and have a film crew with you. … Keep Reading: * Harvey Updyke Halloween costume * Guy crashes Tiger Walk, gets arrested * Auburn fan Occupies Herbstreit * Auburn English professor on “Jeopardy!” […] 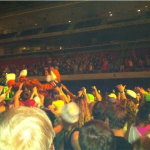 If the Capital One Mascot Challenge comes down to who can best throw their hands in the air and wave’em like they just don’t care, Aubie’s got this. His appearance on stage—and then on the crowd—during Girl Talk’s performance was by all (Twitter) accounts one of the highlights of last night’s UPC Fall Concert at […]

We never thought it would come to this. Have you seen those paw prints? How hard could could tracking an anthropomorphic Tiger that stacks the dang trophy on top of watermelons be?  Apparently hard enough that the famed Auburn Institute of Exploding Dog Studies had to be brought in to raid Aubie’s lair like it […]