Steak 'n Shake coming to Tiger Town. Jack's coming back to S. College.  Auburn's classic burger joint revival is nigh. But Jack's appeal to once-upon-the-Plains nostalgia could be lost on at least a certain segment of Auburn alumni who may remember the Birmingham-based fast food franchise's first expansion into Auburn in the Fall of 1965 not for the cheap thrill of 15 cent … END_OF_DOCUMENT_TOKEN_TO_BE_REPLACED 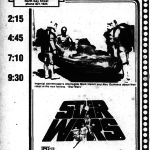 In honor of May the Fourth, Star Wars Day, let's take the best short-notice gander at the Force's initial impact on Auburn we can. Star Wars got to Auburn a few weeks late, of course, but once it arrived it stayed, held over, a costume party-level hit--even with The Plainsman. And--true story--R2D2 was the only droid to survive the Kopper Kettle explosion. May the microfiche … END_OF_DOCUMENT_TOKEN_TO_BE_REPLACED 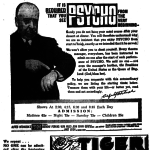 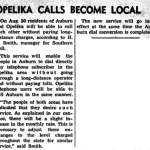 God only knows how many Lee County love affairs were cut short by the burdens of long-distance relationships back in the day. From the Aug. 12, 1959 issue of The Auburn Plainsman:… Keep Reading: * Bo Jackson and Bob Hope * I think of Kurt Crain * Secondhand Shug * Smithsonian Magazine photographs kid in Auburn hat at Texas prom * The WiFi Network Names of … END_OF_DOCUMENT_TOKEN_TO_BE_REPLACED

When I was 14 years old, I found a dirty book on the shelves, alongside a bunch of Robert Ludlum thrillers, "Women Who Run with the Wolves," and several copies of "Gone With The Wind." It was my mom’s yearbook from her freshman year at Auburn. Mom was on the couch. I brought it over. It was a Sunday afternoon in Birmingham. On page 54 of the 1974 Glomerata, in five separate … END_OF_DOCUMENT_TOKEN_TO_BE_REPLACED