Continuing in our History-Making Miss Homecomings series, we pay tribute to the lovely Love Scales, whom in addition to having one of the most awesome homecoming queen names ever (her full name was actually even cooler: Loventrice), was also Auburn’s first black Miss Homecoming candidate. She was a sophomore. No, she didn’t win. The […] 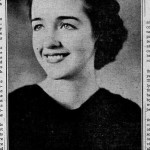 You typically think of it as a one-time thing. At least I think you do. Something with term limits. And maybe it’s that way now. But once upon a time, at least at Auburn, it was like the Heisman Trophy. If you’re awesome enough, you can win it twice. Same thing with Miss Homecoming at […]

It’s come to our attention that our quick story on how this past Saturday was more than likely the 104th anniversary of homecoming at Auburn, rather than the 100th, ruffled some official feathers. That’s understandable, I suppose. It costs money to reprint programs, and deleting tweets is a pain—I get that. But it wasn’t run […] 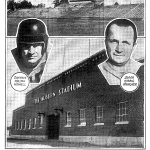 I’m sure there are other photos of the exterior of The Auburn Stadium around. I just don’t think I’ve seen one. But there it is, at least the west side. Looks like the letters are in that Toomer’s Drugs font (they’re expecting a visit from everyone of you). Pretty interesting. Even more interesting? THAT STAT […]