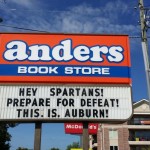 The folks at Anders Bookstore were able to find out what San Jose State’s nickname is (it’s Spartans), and re-worded their marquee accordingly. (Cue “Dueling Banjos”…) Reminds me of fun-time Auburner chills of old… Related: San Jose State blasting Auburn Fight Song, country music at practice in preparation for Auburn game. If you’d like to […] 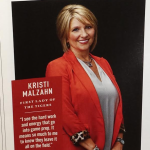 The latest issue of Southern Living has a big Iron Bowl feature, because college football rivalry is as southern as heat and stuff. The article starts and ends with a heartwarming story of an Alabama fan’s daughter who enrolled at Auburn because she was determined to not let her parents’ failings determine her destiny. Photo-wise, […] 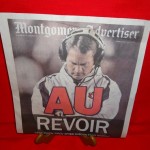 The Montgomery Advertiser has a proud history of powerful puns when headlining their coverage of momentous Auburn occasions. The Gene Chizik firing issue? A lot of people chuckled. A lot of people complained. But their choice for the morning after the 2005 Iron Bowl, especially when combined with the full-page photo of Brodie Croyle accepting […] 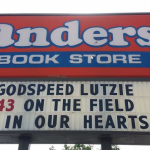 Anders Bookstore in Auburn this morning updated the message on its marquee in tribute to Philip Lutzenkirchen. The sign reads: “Godspeed Lutzie—43 on the field, 1 in our hearts.” On Sunday afternoon, Auburn fans honored Lutzenkirchen by rolling Toomer’s Corner. Related: Philip Lutzenkirchen’s parenting advice. If you’d like to help TWER keep on keepin’ on, […] 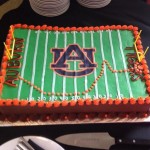 Chris Davis didn’t cut quite as sharp as the fondant design on Auburn fan Jonathan Guarin’s groom’s cake indicates, nor will the cake version (or anything in the world) taste as sweet as its inspiration. But still, the latest addition to the growing catalog of groom’s cakes celebrating not just a team, but a single […]