If you’re happy and you know it, you might be an Auburn student.

Have you ever driven down College Street and been like ‘I wish some engineer would produce an intricate half-tone image of Auburn’s iconic Samford Hall rendered in a single continuous line?’ 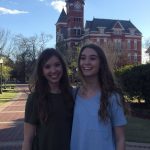 Technically, they’re fraternal. But academically, the Peters twins, who Saturday night will serve as co-valedictorians of Dothan High School’s Class of 2018, are as identical as you can get. Both in the National Honor Society. Both with straight A’s their senior year (which was actually spent almost entirely on the campus of Wallace Community College getting a jump on […]

Auburn has a long, proud tradition of creatively trolling the Tide before the Iron Bowl. In 1961 (the year Alabama finally won a national championship), “ingenious Auburn students… scored a success at the University of Alabama” by spelling out “War Eagle” in winter grass seeds that quickly sprouted behind Denny Chimes. A similar stunt was […]