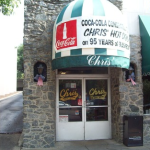 Founded in 1917, Chris’  Hotdogs in Montgomery has served a Who’s Who of history’s hotdog hungry. Franklin D. Roosevelt would frequently ask for a box of the world famous hotdogs as his train pulled into Montgomery. So would Harry Truman. Both Bush presidents have been served, and every Alabama governor since it opened. Chris’ catered for […]