1996 Auburn psychology graduate Becca Coluntano and Chad Watkins met at the gym. It didn’t take long. They’re cut from the same cloth. They talk the same trash — one about Alabama, one about Auburn. One day in 2004, Becca walked in in an Auburn shirt, not thinking twice about it, encountering the enemy at a weight rack on the outskirts of Philadelphia the last thing she expected. But there he was.

“You can’t walk into here with that on.”

She fired back, instantly — instinctively. She knew what he was. Local skirmishes along Iron Bowl lines are obviously rare in Pennsylvania. But when triggered, when duty called, it was like riding a bike.

“I can’t believe they let Bama fans in here.”

He smiled. She smiled. That’s all it took.

They’d see each other at the gym; they’re both exercise nuts. They’d text each other, Roll Tide and War Eagle each other. When Chad needed to rehome a dog, Becca’s crew took it in. Their families would get together and hang out every now and then. One time, they even watched a football game together.

It was Nov. 30, 2013. The spouses and the kids, less invested in the moment, were in another part of the house. Becca and Chad stayed glued to the TV down to the final second.

“It was just the two of us and I was losing my mind,” Rebecca says. “I was like ‘you’re like a bad country song. I took your dog, we beat your football team. What else can happen?”

A whole heck of a lot, it turns out.

“About a year after that, Chad got really sick and ended up at the hospital,:” Becca says. “His wife texted me and said if I wanted to say goodbye, I needed to do it.”

Chad pulled through. But his health remained poor. For a former powerlifter, that was hard to handle. Early this year, at just 45, things again got critical. This time it was kidney problems. At just 45, he needed a transplant. Which meant he needed a donor, a living donor, someone who checked all the right biological boxes.

“When you want a living donor, you have to do all the work for yourself,” Becca says. “You have to find them.”

At first, Chad kept quiet about it, thinking that asking that of anyone, even folks he loved — and who loved him — was too much.

“His wife Kristy finally made him put a Facebook post out there,” Becca says. “He listed all the basic things, like it needed to be someone with O positive blood.”

Becca was O positive. Becca was positive about everything.

She saw the post. She instantly called Chad. She got tested as soon as possible.

After a couple of months of tests and scans and tests, two potential donors were identified.

Becca was one of them — the better one. She didn’t think twice. Neither did her family.

“It was emotional for me,” he told the Einstein Health Network. “I know her husband, I know her children. If something was to happen to her, I’d feel horrible.”

Better Match Becca wasn’t taking no for an answer.

“You have the opportunity to give life back to someone, someone with young kids,” she says. “He was doing dialysis for six hours a day, he hadn’t been on a vacation in three years.

“We were both very active people and I had the opportunity to help my friend be active again. I was like, ‘dude, it’s on.'”

On July 20, at Philadelphia’s Einstein Medical Center, she gave one of her kidneys to Chad. It worked. Three weeks later, Chad was out of the hospital. Becca was running marathons. The only lingering complication? Chad was still a Bama fan. Becca was still an Auburn fan. In the hours leading up to surgery, the nurses couldn’t get over it. They were still nagging each other. Roll Tide. War Eagle. The new bond hadn’t put a dent in the old rivalry.

“His wife actually came up with that idea,” Becca says. “She said it was the least he could do.” 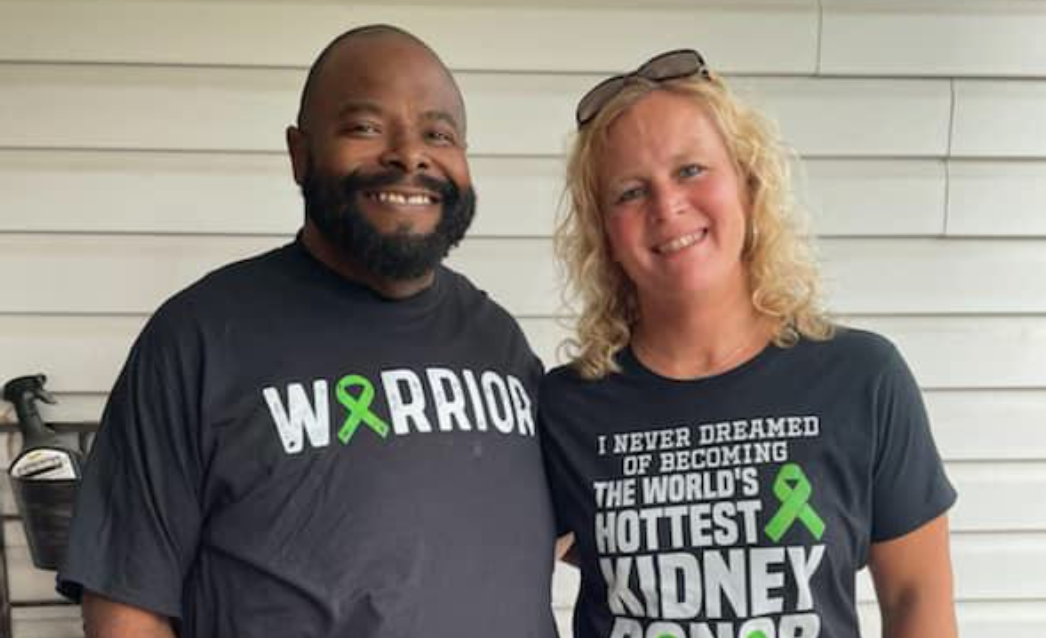 At first, Chad thought it was a joke. Paying for a kidney with a tattoo? Now that sounded like a country song, ha, ha, ha.

“Oh, he’s getting it,” she says. And she’ll get it, too. She already has a matching tattoo type deal with someone. One of her friends from Auburn has “War” on her wrist. Becca has “Eagle.”

Chad is begging her to be reasonable.

Thankfully, in the last few weeks, they think they’ve settled on something both can live with.

“We’re looking to have the Kidney Disease Awareness ribbon with ‘Fearless and True’ written in the ribbon,” Becca says. “My daughter designed it.”

Hopefully, they’ll finalize things Thursday. Before they stop talking to each other.

“We’re having Thanksgiving together,” Becca says. “We’ll decide if we like each other enough to watch the game together on Saturday after that.”