Terry Bowden “fell in love with Auburn” — his words — 20 years before they got hitched.

It was the summer of 1973. Bobby Bowden was coaching West Virginia. Terry, an All-State running back, was heading into his senior year at Morgantown (West Virginia) High School. He was short. But Auburn apparently didn’t care about those things. That’s what he told after an afternoon of fishing in Childersburg with his great uncle and a couple of Amazins.

“My great uncle (Robert Cleckler) lived in Childersburg,” Bowden says. “He owned a bank. He was on George Wallace’s cabinet.”

Cleckler made a habit of keeping in touch with former Childersburg High standouts who had gone on to star in college.

“There was a player from Childersburg on Auburn’s team named Johnny Simmons,” Bowden says, “He had a friend named Dave Beck.”

“I was fishing with my great uncle and he introduced me to Johnny Simmons and Dave Beck and as we talked, it was amazing how many walk-ons were having success at Auburn,” Bowden says. “I don’t know if Johnny Simmons or Dave Beck were walk-ons, but I know Bill Newton was.”

And look at what Bill Newton did, right?

“They had just had the punts blocked and it was just huge news,” Bowden says.

Speaking of “Punt, Bama, Punt,” Bowden, who spent part of his childhood in pop’s hometown of Birmingham, also sort of had a connection with David Langner.

“My dad knew Langner’s dad, Charlie. They went to school together at Woodlawn.”

Despite his All-State status, Bowden says he knew a scholarship to a D-1 school wasn’t coming.

“So I fell in love with Auburn.”

And he acted on it. He applied. He got accepted. He thinks he may have actually met with a few Auburn coaches.

“Yeah, the whole nine yards,” Bowden says.”I was going to walk on at Auburn.”

But he didn’t. He stayed in Morgantown. It was for the best, he says.

“Ultimately, I decided to play for my dad at West Virginia as a walk-on and that’s what I did,” he says. “But that was my first recollection of Auburn — wanting to go to Auburn.”

Related: Terry Bowden says Auburn has a right to claim the 1993 national championship 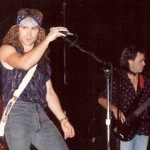