Listen to this article here.

Sports Information Directors were making up all kinds of things in the 1980s. Nobody seemed to care when Bama’s dude did it. But Auburn caught hell. And that was kind of the point.

In 1987, David Housel threw up some phantom bogies on the radars of rival SEC schools à la War Games’ W.O.P.R. to make a point about the insanity of football recruiting. (He actually did compare the whole thing to the Cold War—he has a knack for military analogies… Remember Dunkirk!)

His column in the Auburn Football Illustrated for the Vandy game was a glowing profile on a couple of mysterious blue chippers other SEC schools had somehow never heard of, but that Auburn was in the lead for — Joe Mack and Otto Mcnab.

Yep, mentioned them by name. Yep, that was a big NCAA no-no… or at least it would have been had Joe Mack (“a great physical specimen”) and Otto Mcnab (“all the intangibles to make a great football player”) been real, and not characters in two books Housel had read that summer. 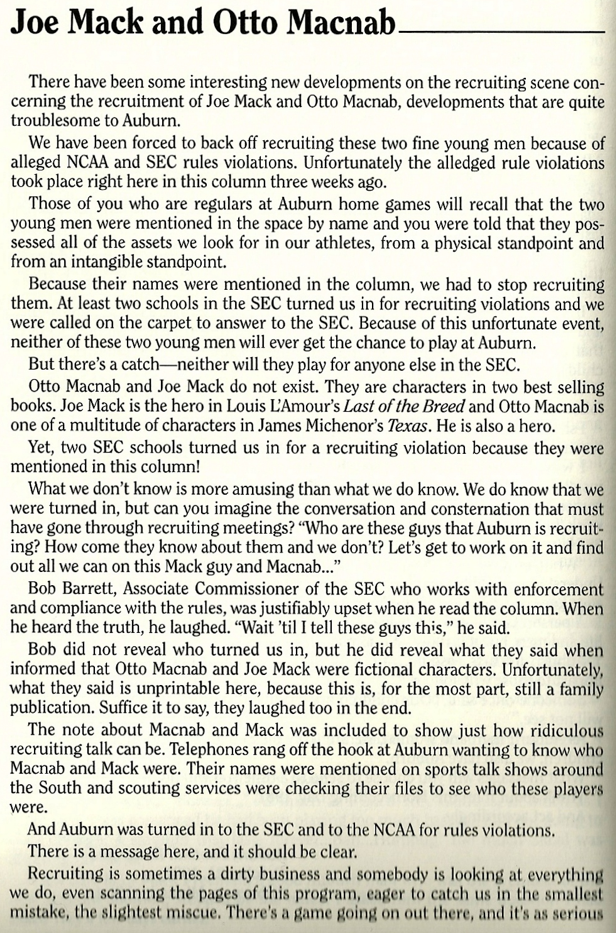 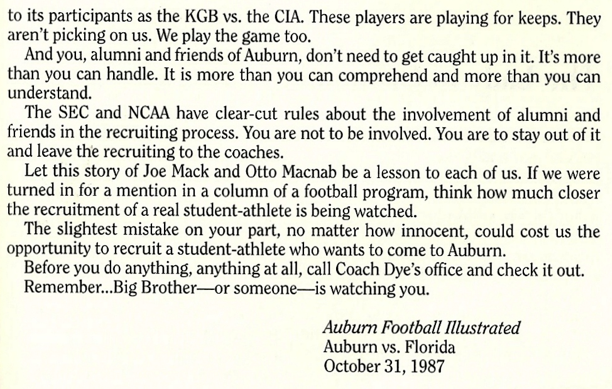 “Otto was one of the first Texas Rangers. Joe was an American Indian who became a test pilot and forced down by the Russians,” Housel told a writer when the NCAA News came calling. “I used them in a notes column to show how ridiculous it is to be worrying about recruiting in September. The next week the phone kept ringing, asking about those two recruits. I guess I made the point.”

“If they’re looking that close at fictitious names, think how much closer they’re looking at real people. This is a deadly serious game, like the KGB vs. the CIA. Fans and boosters need to stay out of it because it’s impossible to know the rules.”

So which fictitious heroes was Housel scouting next?

“I think we’re going after Jack Ryan from ‘Patriot Games,'” he told the NCAA News. “He’s a red-blooded American patriot. He’d make a good Auburn man. We’re going to pass on Tip O’Neill, though. Let him go to Alabama. They’ve got a law school.”