An 83-year-old, 7-7 tie with Wisconsin does not the stuff of legend make. The previous sentence was a lie.

The final 1 in Auburn’s current 1-2-1 record vs. the Badgers was instantly the stuff of legend, and a completely underrated (and barely even remembered) chapter in Auburn’s big game history. Chances are you’ve never heard about it, but leading up to the 1931 season? It was all anyone in Auburn was talking about.

For starters, it was Auburn’s first real intersectional game in five years—or eight years, depending on who was writing. Half the people previewing the Wisconsin game seemed to have forgotten about Auburn’s 1926 game vs. Marquette (what with it being played in Auburn, and against, you know, Marquette). As far as some papers were concerned, Auburn’s last tangle with Yankees was the 1923 Army game at West Point.

But these weren’t just any Yankees, this was Wisconsin, and in the early 30s, Wisconsin was nothing to sneeze at. In the early 30s, Wisconsin was doing the sneezing, and anything else it wanted to do. Auburn was literally going up against the big boys—whatever they were feeding them up in the Badger State in the Depression years was working. Actual quote from the Plainsman: “The Badgers were the heaviest team encountered by the Plainsmen during the year, all of their players being well-proportioned and adapted physically for the game of football.”

So yeah, the well-proportioned Badgers were figuratively and literally throwing their weight around the mighty Midwest. Now, sure, the 1931 squad’s 6-4 final record may not seem that impressive. But those four losses were close losses, and to perennial powerhouses. They had gone 6-1-1 the previous season, tying Ohio State, losing by one point to Purdue (back when you did not want to play Purdue), and by 13 to co-Big 10 champs Northwestern (which Wisconsin head coach Glenn F. Thistlethwaite had coached to a conference championship a few years earlier). In 1928, they went 7-1-1. Minnesota kept them from claiming the Big 10 championship by a measly six points, but not before the Badgers took out Michigan, Chicago, Iowa, even Knute Rockne’s Notre Dame, which would win the national championship the following year. Oh, and Alabama.

Yes, the mighty Crimson Tide had invaded Wisconsin three years earlier. It did not end well. The Badgers well-proportioned the hell out of them, 15-0. And what with it being a time when pure poundage was still one of the primary predictors of victory, they expected to do the same to Auburn.

In fact, the word from Madison was that Wisconsin basically deemed it a glorified practice game, the icing on a cupcake trifecta: Bradley Polytechnic from Illinois, North Dakota State, and Alabama Polytechnic from some one-horse southern burg called Auburn.

Auburn was a three-touchdown underdog, some said four. A polywhatever school from the South with nearly 2,000 students vs. a major Midwest university with a total enrollment of nearly 10,000? A school so big it was discussing building a “University City” to make sure there were enough toilets for everyone?  Auburn had no chance! But hey, at least it might teach the scrawny little scrappers some solid life lessons, toughen them up for next week’s game vs. Georgia Tech …

Even API President and Auburn superfan Bradford “They Almost Named The Stadium After Him” Knapp thought the best anyone could hope for was just for no one to get hurt.

Just … just be proud of them … 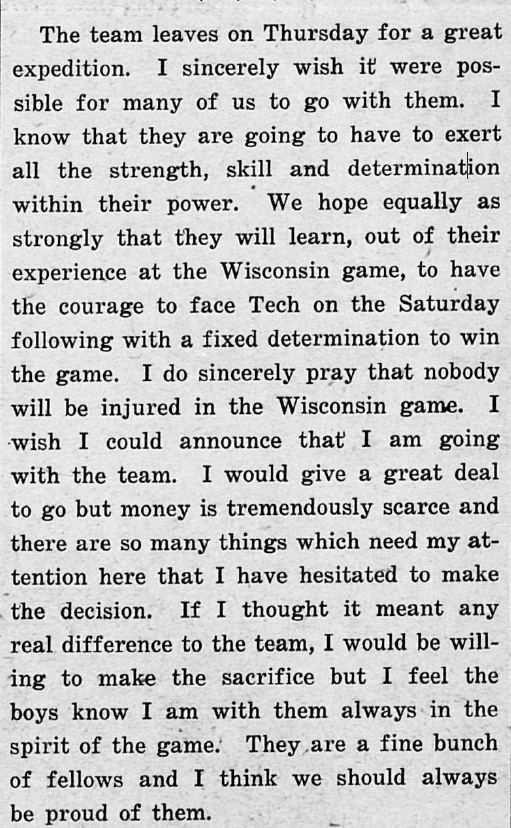 In the end, 31 players made the trip up to Madison, including future All-American (Auburn’s first!) Jimmy Hitchcock and senior starting center Ralph “Lefty” Jordan, all of them perfect gentlemen.

Yes, a railroad officials was so impressed by the social graces of the Auburn team as they wound their way toward certain defeat he was compelled to write Knapp a letter.

“I have accompanied many football teams,” wrote J.O. Linton, the District Passenger Agent for the Illinois Central Railroad, “but can say to you without hesitancy, that I have never traveled with a finer and better behaved crowd of boys than on this trip.”

“I have never seen a squad of college boys conduct themselves in such a gentlemanly manner and I am sure everyone who came in contact with them couldn’t keep from being impressed with the boys and the college they represent,” he wrote Knapp. “There wasn’t (a) moment during the entire trip that I wasn’t proud of them …”

With coaches and a few sports writers, the Dixie delegation totaled 38. They stopped in Chicago to see the sights. They got in some practice at Loyola. Then it was time.

The game was cold, wet, bleak. And primitive. Three yards and a mist of mud. It rained the whole 60 minutes, but the first half might as well have been played in a drought compared to the second. “Rain started to fall in sheets as the teams came out for the second half.”

(When the Plainsman’s boring play-by-play decides you need to know it was raining, then it was really, really raining.) 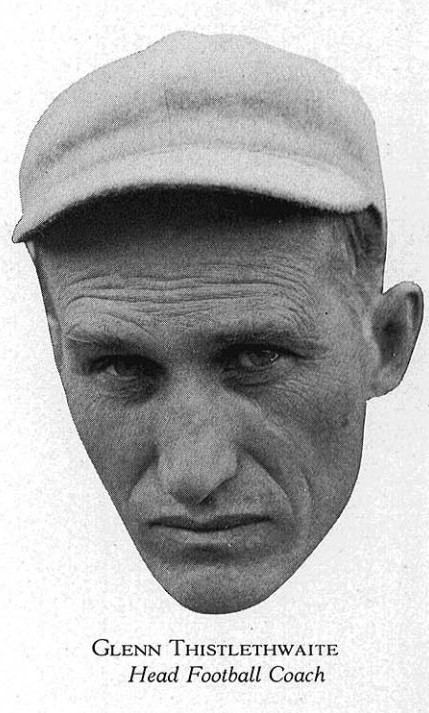 Auburn’s line played the entire game. The whole dang game. And they never let Wisconsin cross the goal line, not from scrimmage at least. The Badger’s lone touchdown came on a 100-yard return on the second half’s opening kickoff. But the dude missed the extra point! And if Auburn hadn’t been offside, Auburn might be tied up! Because he made the second kick. And because a couple of drives later, after taking a timeout because Shug was injured—he fought through the pain like that time vs. Germany and stayed in—the Tigers took it in for a touchdown.

From that moment on, the 1931 Auburn Tigers—or at least the 14 who fought Wisconsin—were dubbed the Iron Men. Sure, it was a fairly common appellation given football squads who beat the odds without reinforcements, but the papers still couldn’t get over “the Iron Men from Auburn” who had “fought gallantly against a much heavier Wisconsin combine… holding up the prestige of the South in football.”

As the Glomerata put it, the only thing Auburn did was “startle the Universe.”

Not even Bama could contain it’s congratulations for “Good old Auburn”, deeming the daring defenders of Southern honor the most thrilling “team from below the Mason-Dixon line.” 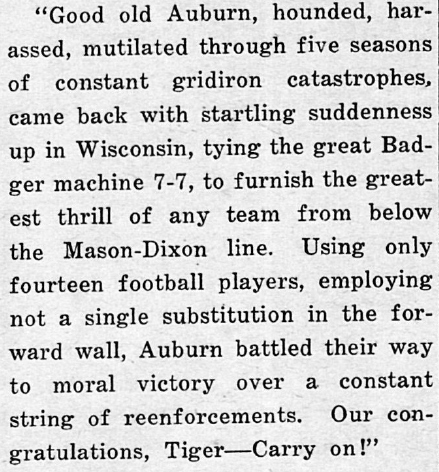 People in Auburn only learned about the Iron Men after stupid Game 7 of the World Series was over—that’s what WAPI went with instead of the Auburn-Wisconsin game. Sheer madness! An occasional summary of the action was read during the commercials, but the full play-by-play wasn’t broadcast until the Cardinals beat the A’s. But since the team wouldn’t be arriving (very courteously) back in town until Sunday night, there was plenty of time to prep the celebration.

“We came back into Opelika on the train, the Seminole, and had the biggest welcoming party to ever greet an Auburn team up to that time,” Shug reminisced years later. “Usually we had to catch rides back to Auburn, and this time I remember looking out the back window of the car and seeing nothing but headlights stretching all the way back to Opelika.”

Those headlights stretched back eight whole miles. It was three thousand peoples worth of Ford Model A’s and whatever else people drove back then—that’s how many were waiting on the boys at the station. It was the biggest train-greeting crowd ever in Opelika, way bigger than the one former President Taft got a few years earlier.

The return trip was wild. Guys were riding on the running boards, almost getting run over, almost dying, not caring. (That’s the only thing Knapp felt the need to complain about when the excitement died down.) Finally the Iron Men arrived back on campus “where a mammoth bonfire leaped high in acclamation of Auburn’s return to the realm of the mighty.”

The word “frenzy” showed up a lot in the coverage of the celebration. The band raised the dead. People screamed. They shouted “War Eagle!” Players got up and thanked everyone, at least that’s what people guessed they were saying—it was too hard to hear. Even one of the sportswriters who rode with the warriors up to Wisconsin got up to proclaim that what the Iron Men from Auburn did to the Badgers was one of the damnedest things he ever saw.

Knapp, apparently, could barely contain himself. He couldn’t find the words to describe how proud he was that 14 not heavy kids from Auburn had held their ground against “a great University with thousands of students and with heavy and powerful men and a large amount of money with which to hire coaches.”

That they had? It   meant that “the old traditions and real Auburn spirit” were back. 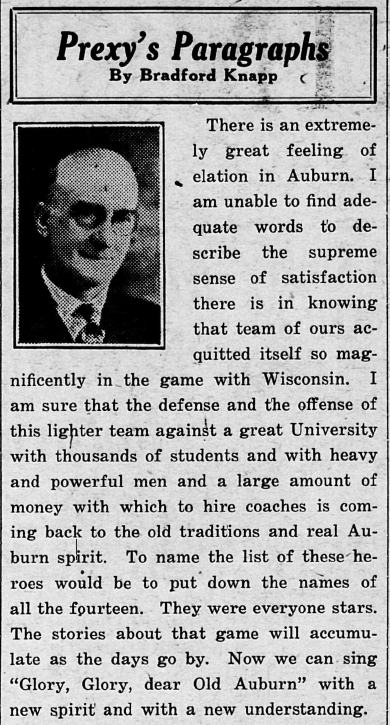 “The stories about that game will accumulate as the days go by,” he wrote in his column for the Plainsman. “Now we can sing ‘Glory, Glory, dear Old Auburn’ with a new spirit and with a new understanding.”