In early 1981, when young sports columnist Paul Finebaum’s story on how Bear Bryant was “losing his grip” on the state of Alabama appeared in the Birmingham Post-Herald, assistants under brand new Auburn head coach Pat Dye pounced. It wasn’t so much the words that had them smiling. It was the photo that went with them.

At least that’s the way Finebaum remembered it when we discussed the recruitment of Bo Jackson for a story I wrote.

“My memory is a little fuzzy 28 years later or whatever it was, but the story was about Bryant beginning to lose his grip, and there were a couple of assistant coaches who were trying to get out. He was losing a couple of recruits and I remember after that article came out… it was very close to recruiting, and during or around the time… I can’t remember, about a week or two….I’m not sure if Bo had made his decision yet. It was a big story and there was a picture of Bryant that was magnified where you could kind of see the crease in his head like craters in the moon. He just looked terribly old. I happened to be covering Auburn at the time. I was at Auburn the night before and I remember that one of Pat Dye’s assistants told me that they had gone out and gotten that newspaper… now just think about this, this would have been ’81, I guess… I mean, it’s not like today where you just email it or post it on Facebook… but one of the assistant coaches told me they got the newspaper and figured out a way to deliver it on the doorstep to every recruit they were after down the final stretch to kind of give them an idea of how things were coming undone.”

Dye respected his hunting buddy and former boss too much — probably a little too much, in the minds of some Auburn fans — to greenlight something like Operation Bear-ly Alive. But a young, Bryant-battling recruiter doing it? A guy tasked with stocking a conference cellar-dweller with players that could finally turn the Tide? That’s believable, especially when there was recent evidence to suggest that it would work.

Two years earlier, a Parade All-American quarterback flipped from Alabama to Auburn because he thought Bryant indeed had lost his grip — on the towel rod.

“I was signing with Alabama — everything was all set,” Bob Berry, one of the most-sought-after recruits in the country in 1979, told the Atlanta Constitution that July. “But then Coach Bryant fell in the shower the day before he was supposed to come sign me.”

News of Bear’s spill immediately hit the newswires. He was hospitalized for cracked ribs and was having a hard time breathing. Some reports said it was pneumonia. Some said bronchitis. All of them said he was 65 years old.

“That started me thinking about things like whether or not he might be around for the next four years, or whether or not I really wanted to go to Alabama,” Berry said. 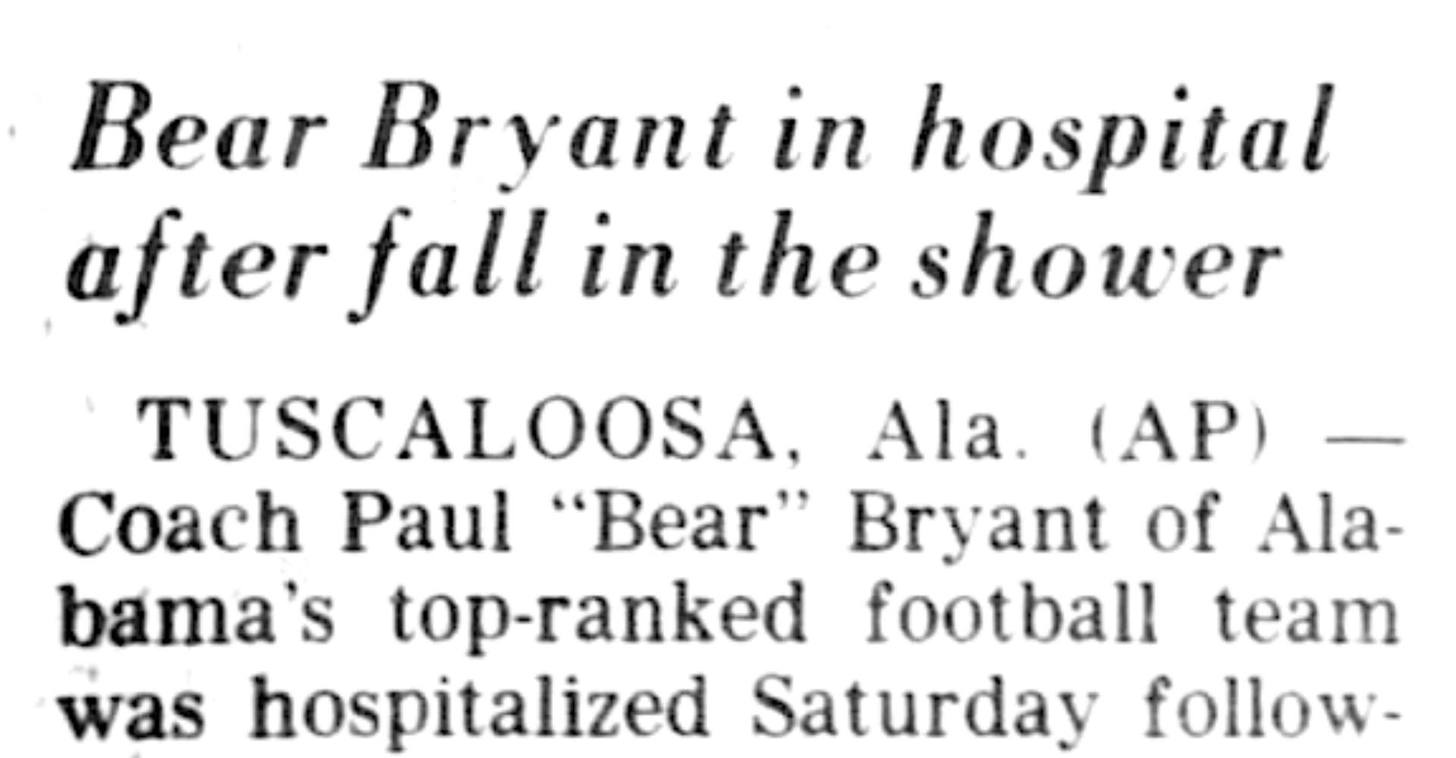 Berry apparently was more worried about Bryant’s health than the health of Auburn’s football program, which had just been placed on probation. But even with respiratory problems, Bryant got the last laugh. Forty-four-year-old Auburn head coach Doug Barfield, who failed to fell the Bear in his five years on the Plains, was forced out two years later—two years before Bryant retired.

Berry played just one year at Auburn, trading football for baseball before the start of his sophomore season.

Bryant’s age and leathered appearance was also an easy target for Auburn’s student newspaper, which in 1979 ran a photo of one of its editors dressed up as Bryant… in a houndstooth hat and zombie mask.