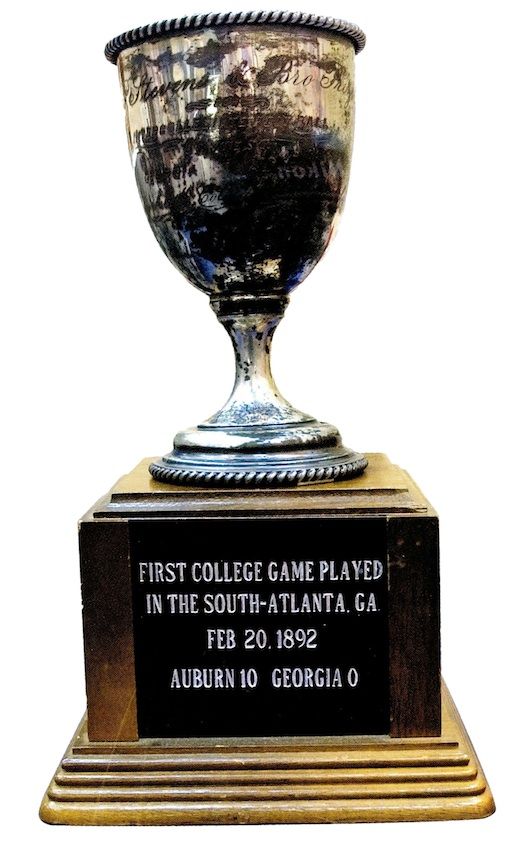 It always made me feel a little inferior. I couldn’t help it. You’re growing up and the CBS and ESPN intros make you feel that Auburn and Georgia are the Adam and Eve of southern football, and that feels good and right.

And then one day you realize that maybe they’re just, like, the Cain and Abel or something… because, OK, people are now throwing “Deep” in front of it. Oh, it’s the Deep South’s oldest rivalry. Oh, so just the southern part of the south, way on down there where football took a little longer to arrive because once upon a time geography played a pretty big role in the rate of cultural transmission and stuff. You start digging a little bit and realize that the reason, say, we lost (big) to North Carolina and… Duke… in our first year of competitive football was because well, the Tar Heel State was a bit more experienced with the pigskin. Ditto Old Dominion. The University of North Carolina played their first game in 1888, Virginia in 1887. You dig a little more and you realize that because of their four to five year jump on us and Georgia (and even Vandy and such), those two teams (and their lesser moons) were kinda deemed by the eastern snobs to be the end-all-be-all of that stuff that passed for football down in Dixie. (For crying out loud, wire reports north of the Mason-Dixon line were ready to crown Virginia 1899’s “Champions of the South” if they beat Georgetown, of all teams; the Cavaliers had played and beaten exactly one southern school—Virginia Tech. Congrats?)

So, OK, that probably explains, or at least goes a long way in explaining, why North Carolina and Virginia get to call their’s, in all caps, “the South’s Oldest Rivalry.”

And then you get an email from reader Brandon Fincher before the SEC Championship Game and realize, OMG—it’s not. It never has been, now more than ever.

*… I don’t get all the details exactly right, but the spirit is solid, seriously. Email me if you want the nitty-gritty.