Actually, in Auburn’s first (varsity) game played in Jordan-Hare (then Auburn Stadium), it wasn’t so much a case of bad officiating as it was a case of the timekeeper (who was either a Georgia Tech or Texas A&M grad) just being an idiot or something.

You’d think think that the guy with the watch in his pocket would deem it pretty incumbent upon himself, when asked how much time was left in the game, to actually, you know, communicate how much time was left in the game… and not with some ambiguous hand gestures, but with his mouth, with clarity, specificity. I mean, this was a game with serious implications for an entire football program’s self image, an entire people. The first game in your stadium? You’re supposed to win that (especially when you’re favored), not just not lose it.

Surely he had to know that the lack of urgency in Auburn’s play calling as time wound down meant that the players and coaches were obviously confused about how many hikes they had left. Yet, he’s going to be all coy when asked about it?

Dude had one job. He blew it. There’s no getting around it.

I’m sure the 1939 edition of the Blame Ourselves Brigade was out in full force the next morning, à la AU vs. TAMU 2014, attempting with their We Didn’t Deserve To Win Anywayzing to establish some sense of pain-numbing moral superiority over petty fans of other teams who would dare debase themselves with complaints about a crap call at a critical point in the game (as if it were logically impossible to be both disappointed in your team’s performance and irate over an official’s incompetence).

But the frustrating thing was that, if you looked at the stats, you’d come away thinking that Auburn did kind of deserve to win.

“Except for the score,” the Columbus Daily Enquirer wrote, “it was all Auburn.”

McGowen “was the work horse of a weakened Auburn team having to kick, run and pass,” the Birmingham News wrote. Sure, he missed an easy field goal early in the game and another one late, “but he intercepted Gator passes, returned Florida kicks, and did everything there had to be done except catch his own passes. His punts were sticking to the sidelines better than lime.”

Dynamite Dick finally tied it up in the fourth quarter, lobbing a 25-yard touchdown pass to backup end Babe McGehee in the corner of the end zone. Then he came in and kicked the extra point.

“Except in scoring, which after all is the thing, the Tigers ran rings around the Alligators.”

Late in the fourth, Auburn was knocking on the door again, moving the ball at will. They zigzagged 60 yards down the field on two electrifying runs for a final comeback drive that was destined to be framed. The ball was on the Florida eleven. Quarterback Lloyd Cheatham started slowing things down. They were going to take their time to score. But unbeknownst to everyone but God and Mutey the Ref, they didn’t have any time to take.

There were a couple of runs up the middle, a five-yard delay of game penalty. Somehow it ended up being second down on the three-yard line. As the players unpiled, quarterback Lloyd Cheatham asked how much time was left. But the zebra didn’t say anything. He just held up two fingers. Two minutes? OK, awesome, plenty of time to punch it in or kick a field goal. Cheatham yelled “hike” and gave the ball to ol’ Geter Cantrell. Geter got down to the Gator two.

Read it and weep. 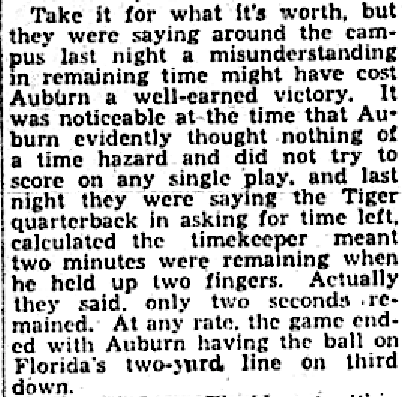 That paragraph from the Birmingham News gives the most details about what happened, but the clock confusion was played up in pretty much all coverage of the game.

The Columbus Daily Enquirer opened with “Father Time, that undeniable old cuss, cracked the whip over the Auburn Tigers at the Florida two-yard stripe this afternoon to force them to submit to a 7-7 deadlock in a football game that dedicated this new stadium before 13,000 roaring fans.”

The lede in the AP story on the game that ran in papers across the country: “Many of those 13,000 fans who watched the Auburn Tigers dedicate a new stadium Thursday will contend for days to come that the timer’s gun robbed the home team of a victory over the plucky ‘Gators of Florida.”

Had the game been played two years later, it wouldn’t have been an issue. At the 1941 homecoming game against Clemson, Auburn debuted its first real modern scoreboard thanks almost entirely to donations from prominent Auburn alumni in Montgomery… (but the guy doing a lot of the fundraising, WSFA owner Howard Pill, was actually a Bama grad—don’t tell anyone).

“One doesn’t really see the necessity of such an object (a scoreboard) until he views a football game without one to refer to every few minutes,” the Plainsman wrote in 1941 after the Tigers shut out Louisiana Tech at home early in the season.

It was, so the joke went, the best working time piece on campus, clocks in the classrooms being notoriously unreliable back in the day.

“When a person is watching a game between two closely equal teams, the score is seven to six, the spectator’s team is behind and there is one minute left to play, the scoreboard at the head of the stadium is watched almost as much as the two team on the playing,” the Plainsman wrote.

And what with the two fingers = two seconds insanity that kept the Tigers from dedicating their stadium with a W only three home games earlier, that was probably nowhere truer than Auburn Stadium.