Auburn’s first great coach was all about a college football playoff. Shug was not.

Yes, pretty much every other NCAA sport had one. But add four games to a football schedule? Maybe more? Just go ahead and take the “college” off the game, because in terms of time commitment and physical toll, that there is pro ball. At least that’s what Shug thought, and told reporters down in New Orleans before taking on Oklahoma in the 1972 Sugar Bowl during a spike in playoff chatter.

Sure, that year there’d be a pretty solid consensus on crowning the Orange Bowl winner, be it Bama or Nebraska (and thankfully it was Nebraska). But still, national championships always had that asterisk: mythical, mythical, always mythical. The bowls were great and all, but that bugged people. Shouldn’t we try to do something about it? 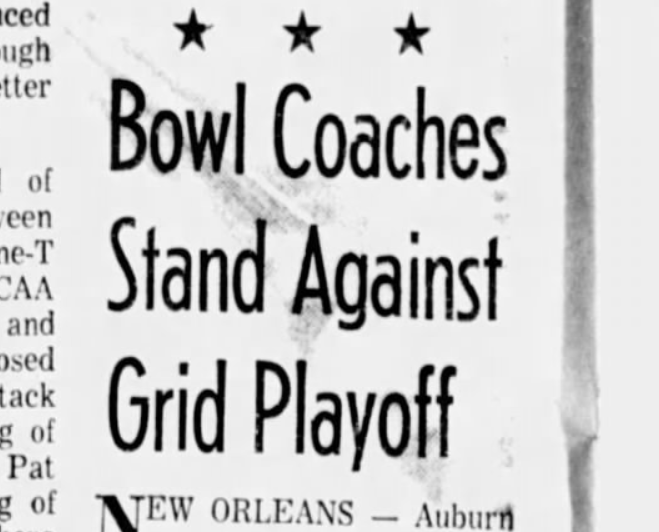 Here are the quotes:

“I don’t like the proposals. The closest I can figure it, the playoff would mean three or four more games.”

“Take a team that plays an 11-game schedule and maybe goes to Hawaii for a gravy game (Nebraska, cough cough) to make it 12. If you add four games, it’s 16.”

“Why not go to professional football and just forget about semesters, quarters and the like.”

“I am inalterably opposed to anything that interferes with the bowl structure as it now stands. Bowls have made a tremendous contribution to football. And I don’t say this from the standpoint of a school that has gotten rich from the bowls.”

Speaking of Rich, he and I talked about Shug’s playoff paranoia–and I only call it that because of the alliteration; I’m probably team Shug–on a recent episode of “It’s Pronounced Jordan.”