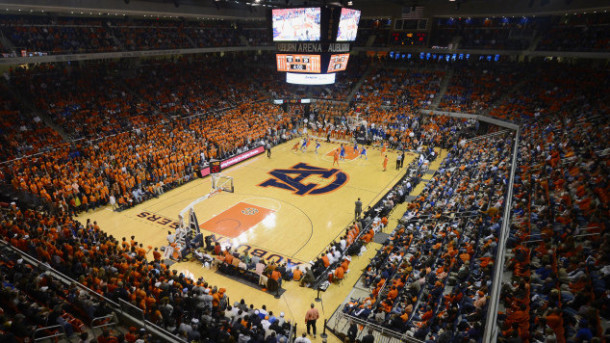 The Tigers (15-8) claw their way, barely, onto the surface of the BUBBLE!!! by winning at Alabama on Saturday night. Bruce Pearl’s team has swept the Tide, plus defeated Texas Tech, another bubble team. Tigers have a super steep climb, though.

The last time Auburn and that word were mentioned in the same sentence, Korvotney Barber was owning fools, Frankie Sullivan was our next big thing, and Tony Barbee was plumbing the mines of El Paso. It’s been a long, long while, y’all. Whether Auburn has any real shot at the NCAAs or not — SPOILER ALERT, the odds ain’t great, even after edging Mississippi State — that the Tigers are even the faintest blip on the radar is a meaningful step forward for Bruce Pearl’s program, especially given the whole “half the rotation started playing college basketball in October, or later” thing. Auburn should enjoy the crap out of the 2016-2017 season, regardless of where it finishes.

That said … if it’s February, and it’s in any way plausible Auburn’s season ends in an NCAA berth, it’s time to discuss exactly how plausible that NCAA berth is. I respect the don’t talk about it yet you’ll jinx it look the other way perspective, but it’s been too damn long since we’ve had the opportunity to break down an Auburn postseason résumé not to break down Auburn’s postseason résumé. Besides, Auburn’s not remotely a Tournament-or-bust program at this point. An NIT bid that would provide precious postseason experience and a possible trip to Madison Square Garden is a prize more than worth celebrating, and we need to start figuring out how likely that is, too. Also, it’s fun.

So, if we want to gauge Auburn’s potential to land a bid to either tournament, the place we want to start is right here, the National Statistical‘s* reproduction of the same RPI “team sheets” the selection committee uses as the foundation of its evaluations. Let’s take a look.

While Auburn’s youth has yielded the expected wild mood swings in terms of game-to-game or even half-to-half performance, the Tigers’ ability to pull out tight wins even when not operating at 100% efficiency has meant their actual results are, in fact, stunningly consistent. Against teams in the top 65 of the RPI, Auburn is 1-7. Against teams ranked 66th or lower, Auburn is 15-1. To reach this stage of the season with a single “bad loss” on the ledger is a major positive, as reflected in the Tigers’ solid (if not spectacular) average RPI loss figure. For comparison, the last team in the current Bracket Matrix composite field (Illinois State) and its first team out (Syracuse) both have weaker numbers than Auburn’s 56.

While the Tigers haven’t earned as much of a boost from their nonconference performance as they might have hoped — Texas Tech, Oklahoma and UConn weren’t supposed to be RPI Nos. 92, 155 and 136, respectively — the nonleague RPI and strength-of-schedule are both NCAA Tournament-caliber, as is the Tigers’ 5-2 mark in nonconference road/neutral games. To choose one example, Miami’s currently in the projected field with similar-but-slightly-inferior numbers.

The committee might also give Auburn the gentlest benefit-of-the-doubt on its poor top-50 record, since only one of those six games came at home.

NCAA-wise, there’s just not enough meat on the résumé’s bones yet. A single win against the first 65 teams in the RPI won’t cut it unless there’s a lot of wins in the 65-100 range, and I’m skeptical three qualifies. If Auburn hasn’t yet had home opportunities against the best teams on its schedule, it did have those opportunities against Ole Miss, Georgia and Tennessee, and failed to take advantage of any of them. Until Auburn proves it’s capable of beating an NCAA-caliber team other than TCU, it’s hard to see it as an NCAA-caliber team itself.

It’s also hard to overlook that of those seven top-65 losses, only one has come by single digits, and that one came against the Rebels (No. 58) at home. Auburn’s average margin of defeat against the top-50 is a hideous 20.6 points, with the end result being that Auburn’s computer ranking numbers — 80th in Kenpom, 74th in Sagarin — lag well behind their RPI. The latter’s still far more important to the committee than the former, but we know the computers do have their say at selection time, too.

So where does Auburn stand?

As Norlander said: it’s a steep climb to serious NCAA consideration. It’s not enough to simply avoid bad losses to make the Tournament, and there’s no shortage of bubble teams — Seton Hall, Wake Forest, Tennessee, etc. — that have both done an even better job of avoiding a Boston College-type defeat and have better wins to boot. Is the foundation for an NCAA bid there if Auburn can beat Florida and Arkansas at home, win at least one of the roadies at Ole Miss and Georgia, and hold serve against A&M, LSU and Mizzou? Yes, it is. But asking Auburn to go 3-1 in the caliber of game it’s gone 1-7 in to date — while also not tipping over the bad-loss cliff it’s flirted with so many times — is clearly asking an awful lot.

So let’s ask just a little less, shall we? Auburn’s “middle-of-the-pack Power 5 team with respectable nonconference performance” résumé is the kind that’s screamed NIT for years, and current projections have the Tigers solidly — if not securely — in the field. The NIT bubble is never as forgiving as it looks (remember that every regular-season mid-major champion that fails to make the NCAAs gets an auto-bid), and I haven’t followed NIT projections closely enough over the years to make any guarantees. But the guess here is that a .500 SEC record would do the trick.

The real worry with Auburn’s below-NCAA Tournament-average computer rankings isn’t that they won’t impress the committee; it’s that they argue, vehemently, Auburn’s unlikely to pull off the victories that would. Personally, I think the Tigers are the rare team that’s legitimately better than Kenpom thinks, since they’ve played so many damn games in which they botched away a massive late lead to make the final score closer than it deserved to be. But it’s also true there’s only so many times Auburn can play with that particular fire without being burned — and at 9-2 in games decided by six points or fewer, Auburn’s already played with it an awful lot. Conversely, where the Florida game is concerned, it’s not as if Auburn’s performances against that caliber of opposition suggest they’re poised to get over the hump against the Gators, either. (Is the hump even in sight?)

So until proven otherwise, the question for me isn’t whether Auburn can make a run at an NCAA berth — though hope certainly springs eternal — but whether it can do enough to preserve its shot at the NIT. With Bryce Brown making up for lost time and Danjel Purifoy due for a few more high-impact games than we’ve seen of late, the guess here is that Auburn holds the “good, not great” line it’s established for itself throughout the season. That means beating one or two of the Razorbacks, Rebels or Dawgs, and holding just steady enough to get past assorted mediocre Tigers of uglier colors. Beat A&M in College Station, and the NIT should beckon. Fail there, and a win in the SEC tourney might be necessary.

Auburn should, yes, play in its first postseason since 2009. But other than beating Alabama, nothing’s been easy for them — and I wouldn’t expect breaking that drought to be, either.

*You might remember the National Statistical under its former moniker, BBState.com. If you’re a hoopshead or into bracketology, a site membership should be a strong consideration for you.

**NatStat doesn’t list the Texas Tech game as neutral-site, so its away record here is off by a game.