Famed documentarian Ken Burns feature Katharine Phillips prominently in his 2007 documentary The War. She has a great accent, and she has great stories. And some of them aren’t just WWII stories—they’re Auburn stories.

On learning that Pearl Harbor was attacked:

“I was a sophomore at Auburn when Pearl Harbor was attacked. I came home from church, went to the dormitory and heard all this screaming and crying and I went down the hall and I said, ‘What’s the matter? What’s wrong?’ They said, ‘Turn the radio on.’ So we turned our radio on and of course, he said, ‘The Japs have attacked Pearl Harbor.’ … But we comforted each other and the girls all cried and wept because they had boyfriends or relatives that were already in the armed forces. And we realized immediately that this would be war.” 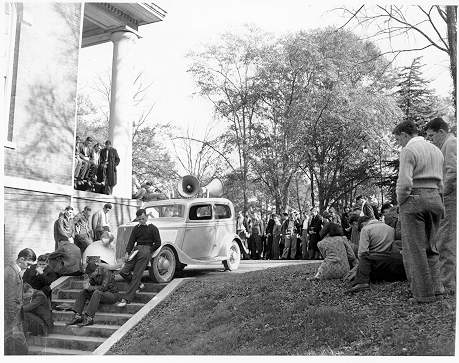 “We gathered outside of Langdon Hall at Auburn and they had a loud speaker truck and we stood there quietly and listened to President Roosevelt declare war. And, of course, our whole life changed.”

On… shoe rationing at Auburn:

“We lived with the war constantly. I think it’s why it had such a profound effect upon my generation. Shoes became scarce. Now, there must have been shoe rationing. I don’t remember how they issued shoes, but, being in college, shoes were very important. And we were down to two or three pair of shoes. So you never let your friend borrow your shoes. When it rained at Auburn we all took our shoes off and carried ’em. Some big reporter from New York City came down to see how southern college girls were living during the war, and he found us walking around the campus barefooted. So he went back to New York and wrote this long article, how southern women went to college without shoes on. Well, the Dean of Women called us all into a big assembly and she said, ‘Now, girls, I don’t care if it’s your only pair of shoes. Put them on when you walk across the campus.’ She said, ‘We can’t have publicity like this in New York about our southern campus.’ So we all then wore our shoes. If they fell apart, they fell apart.”