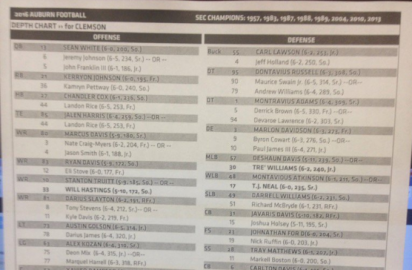 Auburn released its first depth chart of the season Tuesday. As a Tigers fan, I have some not-at-all-half-baked thoughts about it. Here they are:

2. Johnson was lethal in the red zone against Memphis. Could getting that “OR” alongside Franklin be an indication he’s (also?) going to get a chance to reprise that role? Between JJ, Franklin, and the WildKerryon, will Sean White ever take a snap inside the 10?

3. “Hey, so our new starter averaged only 4 yards a carry last season and never had a rush longer than 19 yards in 52 attempts. He’s also added some weight for durability, which is fine, but our offense’s far and away biggest problem already shaped up to be a lack of explosion plays. So who’s going to be the McCalebbesque home-run-hitting change-of-pace backup?”

4. The above makes it seem like I’m more down on Kerryon Johnson than I am — more carries should equal better carries, and at the minimum his season should be a reprise of Peyton Barber’s steady grind to 1,000 yards — and it’s not meant as a knock against Pettway, whose bulk could be a godsend for an offense that’s had as much 3rd-and-short trouble as Malzahn’s has of late. Also, there’s this nagging voice saying that if Gus knew the backs still on the roster were that deficient, Jovon Robinson would still be one of them.

All that said: please be good right away, Kam Martin.

5. Between Pettway and Chandler Cox, “fullback” joins “defensive end” and “guard” as the positions I’m least worried about. So the offense has that going for it.

6. Posited: Darius Slayton is the most important player on this offense not named Sean White, and that he’s listed without an “OR” next to his name is a highly positive sign.

The thought process goes like so: White’s presence, by definition, means a heavier passing emphasis than in previous Gus offenses; the losses of Duke Williams and Ricardo Louis mean that emphasis won’t work unless some wideout enjoys a breakout season, particularly as a deep threat; the other candidates for that breakout season either do not have prototypical deep threat size or have been around long enough they likely would have broken out already; Slayton is 6’2″, a redshirt freshman, a top-150 overall recruit Auburn yoinked away from Georgia, and the recipient of oodles of offseason buzz. If he doesn’t emerge as a bona fide No. 1 target, will anyone?

And if no one does, will this offense go anywhere?

Only one of our four starting receivers is over 5’9. Hmmm

But, yeah, if you’re looking for a player who’s both a) listed as a starter b) not built like a slot-receiving jitterbug, Slayton’s your only option. He’s important.

10. This is a starting offensive line composed of three seniors, a second-team All-SEC junior, and another junior who started for Ole Miss as a true freshman. And worth repeating: it’s coached by Herb Hand.

Put simply: if Auburn’s skill-position players are indeed ready for primetime, this season’s gonna be a whole lot of fun. Shame that feels like such a big if.

12. Don’t think anyone was surprised that Marlon Davidson got the clearcut starting nod at end after the deafening buzz he’d built up this offseason. That shouldn’t obscure the fact that a true freshman breaking into Auburn’s starting lineup along the defensive line is not a thing that happens very often; Carl Lawson his own self didn’t start from the jump, and not because the ends in front of him were immovable objects*, either.

13. Oh, and despite defensive tackle being the single hardest position on the field for true freshman, Derrick Brown has already pulled into a depth chart-tie with Devaroe Lawrence, who looked primed for a breakout senior season himself late last year. That’s two five-star Auburn freshmen fully living up the hype from Day 1. Will wonders never cease.

But this has to be said: Auburn’s line has flatly underperformed those recruiting rankings under Garner. Lawson or no Lawson, there’s no way to spin finishing a decisive dead last in tackles-for-loss in SEC play, no way ranking 123rd in Football Outsiders’ adjusted sack rate can be brushed aside.

This ought to be the year everything comes together and this front just demolishes fools, and if Lawson stays in one piece — PLEASE LORD TAKE MY MENISCUS — they absolutely will. But it’s fair to say that until 2016 actually kicks off, there’s still a crapton for this unit to prove.

15. Not three, not four, but five co-starters listed! And the one starter who doesn’t have an “OR” next to his name is Darrell Williams, who’s received about one-tenth as much buzz in his two years on campus as the other Williams in the two-deep. Like seemingly everyone else, I do expect Tre to cement himself as the best player in the unit sooner rather than later, but for now Kevin Steele appears to be on the “play ’em all, let God sort ’em out” plan.

16. Am I wrong in liking that plan a lot better if our opening opponent’s quarterback was Middle-Of-The-Pack Sun Belt QB rather than the best player in college football?

17. Here, I’ll list all the Auburn players I think are demonstrably better than Carlton Davis:

List ends there. The depth at corner’s a little better than “the other starter’s a redshirt freshman, and Davis’s backup is a true freshman” implies — Stephen Roberts will be back, and Josh Holsey and even Rudy Ford can play some man-on-man outside coverage if need be — but Davis is nonetheless as irreplaceable a player as you’ll find on the roster once you get past White and Lawson.

18. Auburn’s 2015 secondary was about as unjustly unsung a unit as we’ve seen on the Plains in a while. No, they weren’t much for tackling Leonard Fournette, but when you allow the sixth-fewest completions of more than 30 yards in the FBS and the second–fewest of more than 40, you’re doing something right. The Tigers ranked No. 1 in Football Outsiders’ defensive IsoPPP, a scheduled-adjusted measure of how well a team limited opponent’s big passing plays. Yes, the secondary bent at times (as did the defense as a whole); nobody in the country was better at not breaking.

Unfortunately, Blake Countess, Jonathan Jones and (sigh) Will Muschamp had something to do with that. Fortunately, Davis, Ford, Roberts, Tray Matthews and Nick Ruffin all did too, and Holsey and Marshall Taylor didn’t. The Jamel Dean injury stings, but if Javaris Davis can hold the rope and Carlton stays healthy, yeah, everything’ll be fine.

19. One strong argument that Kerryon Johnson’s struggle to break a long one was a freshman-year, small-sample blip: he’s still a starting kick returner, and a good one at that. (His 27.6-yard-per-return average would rank third on this list if he hadn’t just missed the statistical cutoff, and he didn’t have a touchdown to help boost that average, either.) One doesn’t typically think of quality kick returners as three-yards-and-a-cloud-of-dust chain-movers, does one?

20. John Franklin III is the backup holder. It might not be a fake if he comes out to hold. But it probably will be.

ONE FOR THE ROAD

21. Looking over the roster, it seems better built for Gus Malzahn’s pro-style, defense-first, clock-milking mirror universe doppelganger than for him. Mus Galzahn and his pointy goatee would be happy to let Johnson (and Pettway!) plow forward for 3.9 yards a carry behind Kozan and Smith, punt two of every three possessions, and ride his perfectly-coached defensive line and secondary to a 17-13 win. Oh, there’d be trouble when the opponent wedged men Nos. 13, 14 and 15 into the box and dared White to throw to these receivers with passing trees borrowed from the Loeffler era, but hey, Les Miles would approve.

Real-universe Malzahn can’t win that way, or at least there’s precious little in the performances of any defense sharing a sideline with his offenses that suggests he can. The downside of this roster is, well, the same downside we saw in 2015: an offense whose skill-talent deficiencies no amount of scheming can mask, and a defense that for whatever Malzahnian reason isn’t quite the sum of its on-paper parts. But the good news is that the upside is just as obvious: a vintage Gus offense that multiplies its power up front by solidity from White and Johnson to equal POINTS, while Steele maintains the gains of last November. Auburn doesn’t need a Dye-era defense if it’s got even an above-average Malzahn-era offense; it doesn’t need Cam Newton if the defense can just come within touching distance of its vast ceiling.

So it’s not the kind of roster you’d expect Auburn’s coach to construct. But I strongly suspect it’s a roster he can succeed with all the same.

*With all due respect to Craig Sanders and LaDarius Owens, who were great players for Auburn. But they weren’t quite Carl Lawson, either.