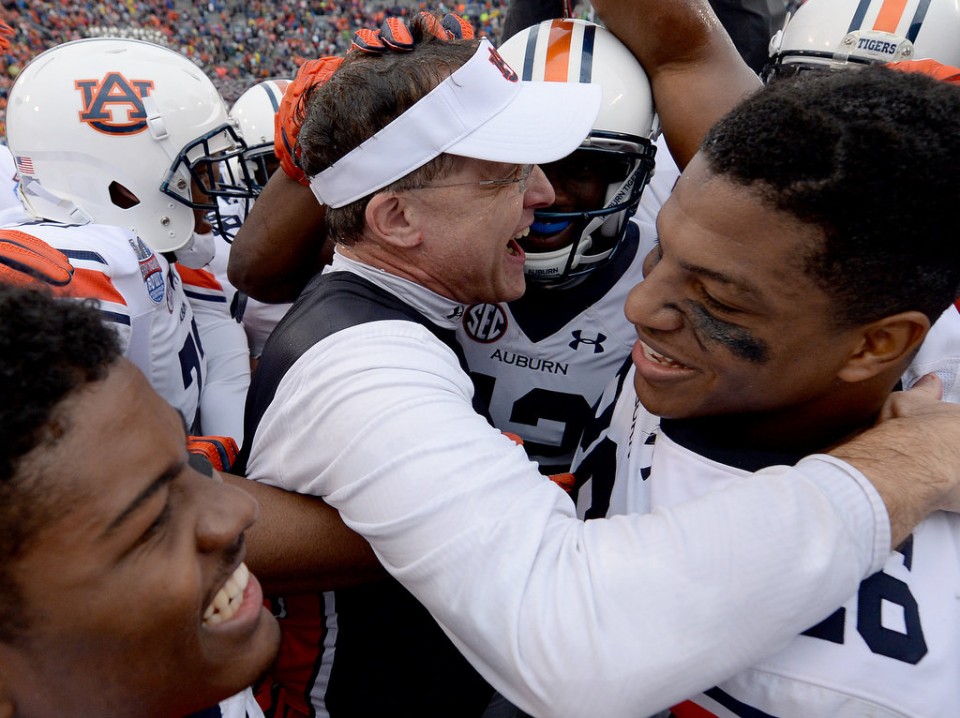 Of my 847 favorite things about Auburn’s 2013 football season, the early mornings got as close as anything to being most favorite of all.

Waking up on a 2012 fall Saturday was an exercise in swinging your feet out of bed and knowing — before they’d even touched the floor — that by the time you got back under the sheets, you’d have spent four hours of your finite life watching the Tigers methodically stuffed into their eighth-grade locker once again. And when it’s not just the usual bullies but the band geeks and math-club nerds to which your team’s turning over its lunch money, well, it’s a special kind of misery.

Fast-forward a year, and I’m OK with my three-year-old getting me up at a quarter to seven. It’s time for a cup of good coffee, Premier League on one TV and Gameday on another, a stack of Eric Carle books to read together, and the quiet joy of knowing Auburn might win or might lose in a few hours’ time, but this go-round I’d watch them punch back, and punch back hard. By the time Davis crossed the goal line that November they’d become my favorite Auburn team of my lifetime. Only a year after being unable to wait until that day’s game — hell, the season — was over, I savored every Saturday minute like an expensive filet. The mornings were nothing less than a gift.

You won’t be surprised to hear “The Very Hungry Caterpillar” was a staple of those mornings, or that my English-majorin’ ass read way too much into it. Here’s Auburn eating five oranges, and winning a national title. Here’s Auburn having one piece of chocolate cake, one slice of salami, one piece of overconfidence, one slice of off-field problems and one slice of hiring Scot Loeffler. That season it had a stomachache! Then Auburn hired Gus Malzahn, and after that it felt much better. After one offseason, it nibbled its way out, and it was the most beautiful orange-and-blue butterfly I’d ever seen.

I knew Auburn wasn’t going to go to the national title game every year. I knew not every season was going to be like bathing in fun. I knew the 2014 schedule had multiple losses on it. But I also knew that as long as Gus Malzahn was Auburn’s coach, my Saturday mornings would never be unhappy again. The transformation had already happened, and butterflies don’t go back into their cocoons.

So I wasn’t so much upset or angry or sad as Auburn flailed its way onto the cliff-edge against Jacksonville State last fall, not nearly as much as I was blindingly, deliriously confused. And 11 games and 11 months later, I’m still just as confused. What in the blue the hell just happened? More importantly, with a 2016 season that could end in Gus Malzahn’s dismissal just days away: what in the blue hell is about to happen?

You’re forgiven if you’ve forgotten that among Johnson’s nightmare campaign and the torrent of 20/20 “oh, of course he was terrible, anyone smart saw that coming” hindsight. Which is nonsense — not even Malzahn himself saw it coming. Johnson had been great against Arkansas in 2014. He’d been great in garbage time. He’d been great vs. FCS patsies. He’d been in the system for years. Malzahn named him the starter on the same post-spring timeline Cam enjoyed. Malzahn brought him to SEC Media Days. Malzahn did not bother to talk up Sean White as a legitimate challenger, or invest heavily enough in White’s preparation that the Mississippi State game became something other than what it was. Say you were skeptical Johnson was really a dark-horse Heisman candidate, sure. Say you foresaw Johnson eating bench after 25 percent of the season, returning only to average 2.8 yards per-his-22-attempts against Georgia, you’re a liar. Malzahn got blindsided.

This is where the 2015 dissection and the 2016 projection have to start. Yes, Malzahn failed to fix last year’s offense. With one quarterback a disheveled uber-mess and a second still in out-of-the-box eBay-certified mint condition when he replaced the first, would anyone have succeeded?

But just because the answer’s “no” doesn’t mean Malzahn gets a pass. He doesn’t yet get to live in the same zipcode as a pass. So he got blindsided. When the fallout from being blindsided is getting swept at home by the Mississippi schools in barely-competitive fashion; when it’s losing at home to a Georgia team whose picture is the first thing you see after Googling the word “mediocre,” dropping the program’s record against the Dawgs to 2-8 over the past decade; when it’s the Birmingham Bowl; when it’s coming within an overtime win over an FCS opponent or a last-ditch Kentucky drive of not even making the Birmingham Bowl … well, you better be damn hell ass certain you’re not getting blindsided.

Yes, Johnson’s collapse was hard to see coming. Until further notice, that Malzahn didn’t see it coming is a career-defining, tenure-altering, program-trajectory-derailing mistake all the same. The good news is that because it was something like an understandable mistake — again, see Johnson’s career ranks last July — there’s reason to think Malzahn’s capable of repairing the quarterbacking damage. Ditch White’s debut against State and his “boy, is Gus desperate” cameo against Georgia, and his season stats come to an acceptable 56 percent completion rate and a much-better-than-acceptable 8.9 yards an attempt. He went 3-2 in his last five starts, the two losses coming to the Sugar Bowl champion Rebels and at Arkansas — the latter a game White nearly stole out of Fayetyeville singlehandedly, only for his receivers and defense to hand it back.

White will be in his third year in the system. He was a top-100 overall recruit per 247Sports, a consensus better prospect than classmates Brad Kaaya of Miami or DeShone Kizer of Notre Dame. It’s not exaggeration to say he got noticeably better every start he made before getting hurt. And if he gets hurt again, well, John Franklin III — warts and all — sits too firmly in Malzahn’s schematic wheelhouse not to be an improvement on 2015.

At times it’s felt like too much attention has been paid to Auburn’s quarterback situation. There’s 10 other guys on the offense and 11 more who play defense, and all. But the evidence of the Malzahn era on the Plains is that the QB position is that important to his success, and more. Chris Todd was an 8-5 sort of quarterback. Cam Newton and Nick Marshall were 14-0, 12-2 sorts of quarterbacks*. Barrett Trotter and Clint Moseley were a “just good enough to scrape out 8-5 with some help from a decent defense (and Stephen Garcia, and Florida’s quarterback injury plague)” tag team. 2-6 in the SEC sums up Johnson’s and White’s play neatly.

Malzahn knows this. Thus the biggest reason for quarterbacking optimism of all: the same coach who waved a wand and made my 2013 mornings perfect has spent his whole offseason turning that wand towards his quarterbacks, with the understanding that if they don’t perform to SEC standards in 2016, he won’t have to worry about SEC standards in 2017.

Surely White is good enough to make that effort count. Surely the magic cannot be so completely gone.

[Kerryon] Johnson was reasonably efficient for a freshman last fall, but he offered almost nothing from a big-play perspective. That doesn’t mean he can’t, but of last year’s foursome, only [Roc] Thomas provided even the slightest flash of explosiveness. The Auburn run game was limited to four-yards-and-a-cloud-of-dust in 2015.

That put pressure on the passing game to get vertical. That’s a problem when you’re oscillating between a pick-prone junior and a redshirt freshman at QB, but thanks mostly to Ricardo Louis, the receiving corps occasionally delivered.

The defensive line should be murderous, particularly if Carl Lawson stays healthy, and Lawson not staying healthy is a cruelty I’m not willing to entertain. Otherwise, I look at Auburn’s roster, and everything looks a-OK. It’s all just fine.

A-OK is not good enough to win the games that matter on Auburn’s viking gauntlet of a schedule. Just fine isn’t just fine. Decent receivers and a passable defense and above-average running backs are good enough in a Malzahn offense with Cam Newton or Nick Marshall at quarterback. A Gus Malzahn offense with Sean White at quarterback and game-breaking receivers, a ballhawking defense and superstar running backs would likely be good enough, too.

But a team whose explosiveness seems concentrated so exclusively at defensive end (and, uh, guard?) is going to find the sledding tough no matter how sharp the coach’s Xs and Os are, no matter how steady the quarterback, no matter how desperate the stakes.

Not yet, anyway. That’s what the Clemson game is for.

No point in pretending the biggest question surrounding this Auburn team isn’t “how many games does Malzahn have to win to keep his job?”, is there? As with a lot of Auburn fans, my answer would depend on who those wins come against, how deflating the losses are, whether I’d need a coaching change to feel excited about 2017. It’s possible I’d be happy with 6-6, I think. It’s possible I’d be ready to move on after 8-4.

Cliched as it sounds, what I want goes beyond the record. I want those 2013 mornings back. I want to feel — I want to know, the way I did every week that amazing fall once they’d gotten off the mat vs. LSU*** — that whatever happens these coming Saturdays, Auburn will play its orange-and-blue asses off. Win, lose, I’ll be OK. Just make it fun. Just make it exciting. Just fight.

Fight on, you orange and blue.

Yes, of course, conquering and winning for Auburn and power are awfully nice. But what I want first is the fight. That much I believe in, and believe in wholeheartedly. 2015 was deeply, deeply weird, and deeply, deeply disappointing. I also believed, two Januaries ago, that Gus Malzahn would never field an Auburn team so dismal. But he’s still the same coach that unwrapped the beautiful Auburn butterfly out of that cocoon, and now he’s got his back as far against the wall as it’ll go. There’s nothing to do but come out swinging, and I truly cannot wait even these last three days to see what Gus Malzahn swinging looks like.

*Marshall also went 8-5, of course, but he also had the misfortune of playing opposite the first defense of the Malzahn era that slipped from “not all that great” to “outright disaster.”

**Almost certainly necessary for Johnson to stand up under a 20-to-25-carry a game burden, but no, I don’t expect adding weight to boost his explosiveness — an explosiveness Auburn badly needs. Here’s crossing fingers a) I’m wrong to think Johnson can’t produce big plays in a larger sample b) Kam Martin can provide them anyway.

***It remains odd to remember one of the season’s two losses as a stirring emotional high point. But it was.