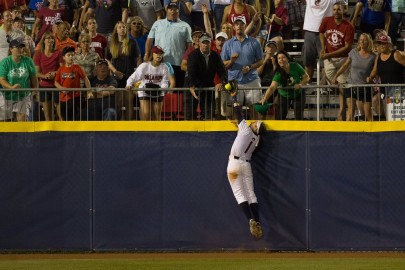 Sports fandom being inherently irrational, I’ve felt a good of measure of how deeply I’ve swan-dived into my support of a given team has always been how irrational that support has become. Exhibit A: setting my DVR to record three consecutive hours of late-night SportsCenter last Tuesday night, because I wanted — needed — to see Tiffany Howard land at No. 1 on the #SCTop10. Also, because I was going to feel damned cheated if she landed anywhere else.

This is a dumb way to feel. Howard’s play didn’t need any kind of outside affirmation, much less the WWL-branded hashtagged version. The moment itself should have been enough–her sprinting back to the infield with arms raised and the ball miraculously in her glove, biting the collar of my t-shirt because the three-year-old will wake up if I scream, Rachael Walters almost exploding with gratitude, taking in that first replay from behind the fence where she spears the thing the way the village tribesman does a fish and you know Knighten just hit a game-winning, championship-clinching home run that Howard flat stole from her. Tiffany Howard’s catch doesn’t need ESPN’s approval. Tiffany Howard’s catch is greater than all the #SCTop10’s ever aired stacked together.

But I set the DVR anyway, because meaningless or not Howard deserved that approval, all of it, every ounce of adulation Max Bretos and that other guy whose name I’ve never learned can muster at 2 a.m. Investment in something this silly isn’t rational, but I can’t be rational where Auburn softball is concerned any longer. This team demands it. It’s been demanding it since the day Clint Myers arrived, whether I or you or anyone was paying proper attention or not.

I haven’t watched enough softball to feel secure in any real post-series analysis, but in the case of Auburn’s loss to Oklahoma I’m not sure a whole lot of analysis is called for. Paige Parker was the best pitcher in the tournament; the Sooners behind her were the best defense in the tournament. The 14 innings Parker pitched against the best offense in the tournament yielded exactly zero runs from any source other than Jade Rhodes home runs. “If we do the little things, we win that game 1-0,” Myers said, and he’s not wrong. But this bomb squad of a team’s plan was never to win 1-0, surely. Auburn was great. Parker was greater. So it goes.

Of course, the most galling thing about Auburn’s defeat is that the margin between great and greater was so teeth-gnashingly thin. What if Lexi Davis doesn’t serve up her one serious Game 1 mistake to the Sooners’ clean-up hitter? What if Courtney Shea’s rocket shot in that game’s seventh inning doesn’t go straight at Shay Knighten, or if the ball kicks away to Knighten’s left or right instead of right in front of her? What if the ball doesn’t freaking squirt out of Emily Carosone’s freaking hand for the one freaking time out of 10,000 freaking pump-fakes? Rhodes might have been the only offense Auburn had against Parker, but with the Sooners scoring in exactly 2 of their 12 at-bats in support of her, it wasn’t far off at all from being enough, dammit.

Most Galling Thing 1A is knowing that closeness is going to eat away at players who don’t deserve to have it eat away at them, and do so forever.

“I’m frustrated to the fact that we know we’re better. I’m more frustrated that we didn’t have Emily’s back,” Kasey Cooper said. “Emily had a bad game and we weren’t there for her. When Whitney had a bad game (Tuesday), we got behind her and we gave her the support. Emily shouldn’t be feeling this way.”

Cooper’s not going to come to the podium and throw Carosone beneath any figurative Greyhounds, of course. But unsurprising as it might be, this reaction still speaks to why so many Auburn fans so viscerally fell in love with this team: Cooper’s pissed she lost, but she’s even more pissed she couldn’t stop her friend from feeling like garbage. (That she does so while still acknowledging the obvious truth that “Emily had a bad game” makes this response even more endearing.) The subtext, though, is Cooper’s understanding that with her eligibility exhausted, Carosone can’t ever make up for her mistake. She’s always going to feel “this way” about that performance, because that will always be the last game for Auburn she’ll ever play. The same goes for Howard, Rhodes, Davis, Walters, and four other seniors besides.

So if I understand why the overall post-Series tenor (from both players and fans) has been more optimism for the future than anger over the defeat — going from “never gotten out of Regionals” to “back-to-back appearances in national semifinals” in the span of three seasons will do that — I also wonder if for those seniors’ sake we also have to acknowledge the magnitude of the opportunity lost. Auburn will be back. Emily Carosone won’t, and after the joy she and those other seniors have shared with us the past two seasons, all the Howard replays in the world won’t make that knowledge hurt any less.

If those same seniors don’t particularly like that “past two seasons” summary, I don’t blame them. I’m less-than-uninterested in the bandwagon barbs from some of our rivals — please, Alabama fan, tell me more about Auburn’s support of its previously mediocre women’s programs while your women’s hoops team prepares to play in Coleman for the first time in six years — but I’m not proud that I don’t remember Myers’ hire registering at all, that I didn’t realize anything had changed until I stumbled across the Tigers going toe-to-toe with Minnesota on ESPNU  in the final round of their 2014 regional, that even as win after win piled up in 2015 it was late in the SEC season before I took the time to sit down and watch them play seven innings. Half of Carosone’s/Walters’/Rhodes’/etc. careers were over before I knew who they were, and I’m the poorer fan for it.

But let it not be said this team and its heroin-caliber drama addiction hasn’t helped me feel like the lost time had been made up. That Minnesota game I mentioned? It ended in a walk-off home run (by Jenna Abbott) in the bottom of the eighth. Since then there’s been the bonkers 13-12 win over Alabama, the bonkers SEC championship win over Tennessee, the completely bonkers Super Regional win over UL-Lafayette, the supremely bonkers World Series win over UCLA, the relatively-serene-but-nonetheless-blood-pressure-destroying nine-inning loss to Florida to end the season … and that was all last season. This year we merely had the bonkers Indiana comeback, a bonkers 14-inning win over Mississippi State, the one-run SEC semifinal win over Florida, the roaring doubleheader comeback against Arizona, the mind-meltingly bonkers three-run seventh to beat Georgia, the bonkers extra-ining win over Florida State, and then, then, after all of that, those three games against the Sooners.

So it doesn’t matter too much that Cooper will return as the best field player in college softball, that Kaylee Carlson and Makayla Martin will be paired as twin aces for the next three seasons, that the Myerses’ transformation of the Rhodeses and Carosones they inherited suggests the roster’s already got stars we just haven’t met yet. Yes, Auburn should be very, very good — at the barest minimum, a continued member of the SEC’s sub-Florida Alabama/LSU/Tennessee-grade upper tier — but they can be not quite what they’ve been these past two years and still be just as astonishingly fun. It’s easy for the Auburn fan to say, but looking around the SEC media atmosphere the last couple of weeks, I honestly don’t see any league fanbase — not even the Gators’ — that’s been as invested in their softball as Auburn.

It should stay that way*. Twitter’s #SoftballSchool jabs don’t mean much when being a softball school of this caliber is such an exhilarating thing to be. Auburn didn’t quite climb to the top of the mountain, but they carried us high enough that we can see what the next decade ought to be — the stands packed at Jane B. Moore, Victoria Draper’s name at least as familiar as the backup small forward’s, every postseason game treated like orange-and-blue appointment viewing … even if the ceiling for any given season seems more “three-and-out in OKC” rather than a title. No, Tiffany Howard won’t ever make a better catch. But this team has taught us there will be moments that will make us lose our rational selves just as wholeheartedly.

So yes, I’m going to stick around. Besides, maybe they haven’t reached the summit yet, but Auburn softball has come far enough that it’s easy to see it from here.

*Or close enough that I can keep convincing myself of it, anyway.