“Hi, this is Madison Collins.”

“Thanks for calling me back! Are you drinking coffee?

First it was her fellow Auburn students. What’s that noise? Oh, it’s a girl brewing her own coffee. At the library. With a Keurig machine she brought from home.

“There have been a lot of stares,” she says.

But what everyone was staring at just made sense. It saved time. It saved money.

“One night, I knew I was going to be at the library really late, so I was like, ‘Oh, I’ll bring my coffee machine,’” the freshman biomedical sciences major from Homewood told The Plainsman.

Come exam time, the owner of what is now the most famous Keurig machine in the world was the talk of campus.

The location of her portable java drip would be broadcast to the study-weary denizens of Ralph Brown Draughon via Yik Yak and Twitter.

If you brew it, they will come.

Oh man, Keurig Girl’s going to be on the third floor!

The nickname was an gift from her friend Zach Blomeley, an Auburn junior, who dubbed her Keurig Girl on Twitter one day, not so long ago, when Collins’ method for securing her caffeine fix was known mostly only to her friends, friends who still mostly only called her Madison.

But when she got back from Christmas break, it was official.

“Our RA had put name tags on all of our doors, and he put ‘Keurig Girl’ on my mine,” Keurig Girl says. “People would walk by and say ‘Oh my God, Keurig Girl lives here?!'”

“Here”, by the way, is in the quad, which is a short walk to the library… thankfully. Because she’s not going to lie: the spare mugs (people rinse them out and bring them back) and and extra K-Cups and the, you know, ten pound single-serving coffee maker she now kind of feels obligated–she has a reputation to keep up, friends to fuel–to load into a tote bag and carry with her whenever she’s burning the midnight oil can get kind of heavy. One arm may be starting to get muscles the other doesn’t have.

Thankfully she has Keurig Coffee to keep her going…and she may not have to pay for it for a little while. Or maybe Keurig is just sending her a T-shirt or something. Who knows… 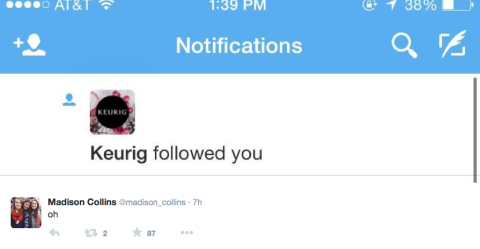 “They contacted me to and said they want to send me something,” Keurig Girl says. “Apparently I’m a big deal.”

Other Big Deals at Auburn: