Share
Custom
Custom
Custom
Custom
Custom
In late March, 1939, President Franklin D. Roosevelt stopped briefly in the Loveliest Village of the Plain and gave a speech. You can see rare photos of the stop here. He opened the speech by complimenting Auburn’s football tradition and closed by hinting that he may have to pull for the Tigers come fall, presidential neutrality be damned. And in between he talked about how wonderful it was to see all the good his WPA was doing for API, to see all the new buildings that were going up (at least in part) on Uncle Sam’s dime, like that wonderful new stadium under construction over there.

And it was wonderful, or would be when it was finished. Fifteen thousand seats. Bathrooms. Workers were hammering away under lights in order to have it ready for the upcoming season, and they did, just barely. This year, Auburn was going to play its first home game in three seasons, its first (real) homecoming in three years, its first game ever in a stadium to call its own. Auburn Stadium was an incredible gift, and what was so cool is that we were actually going to unwrap it on November 30, Thanksgiving Day!

In August, our old “friend” FDR casually decreed that, hey, in addition to maybe running for a third term, he was bumping Thanksgiving up a week, much to the chagrin of the athletic departments across the gridded plain that annually anchored their football schedules with Plymouth Rock. It was the Depression, after all, and in the President’s mind, the country needed those seven extra Christmas shopping days. So re-mark your incorrect calendars, America: Turkey Day is now November 23rd!

Thing is, Auburn had rescheduled the game—it was originally set for Dec. 2 in Montgomery—for Thanksgiving… because they wanted to play the game on Thanksgiving, the Thanksgiving—the one on November 30th. Front and center in national stories about all the great football that “Franksgiving” (as the decision was quickly dubbed by Roosevelt’s critics) was jeopardizing? The Auburn-Florida game.

There may have been bigger rivalry games scheduled that day, sure, but there wasn’t a game in the country that would mean more to a fan base than the game played in Auburn Stadium.

Thankfully, deciding when to officially give thanks to God was still up to the states. Half the country kept the original date, the Heart of Dixie included.

(In a Plainsman story in early November, Auburn sports publicist Elmer Salter made sure to specify that the stadium would be dedicated “on Alabama’s Thanksgiving Day, Thursday, November 30.”)

The 15,000 people pouring into the Loveliest Village in caravans from Montgomery, Birmingham, Columbus, and as far away as New York and Massachusetts, arrived to the smell of turkey in the air. The Greeks had turned the entire campus into a Thanksgiving buffet. People milled in and out of fraternity and boarding houses on their way to and from the stadium with bellies full of bird and stuffing. The brothers of Sigma Phi Epsilon stood outside in front of a giant crepe paper organ with the words “Hail Alumni” on the pipes and sang Christmas carols and led cheers.  All classic Original Date Thanksgiving stuff. 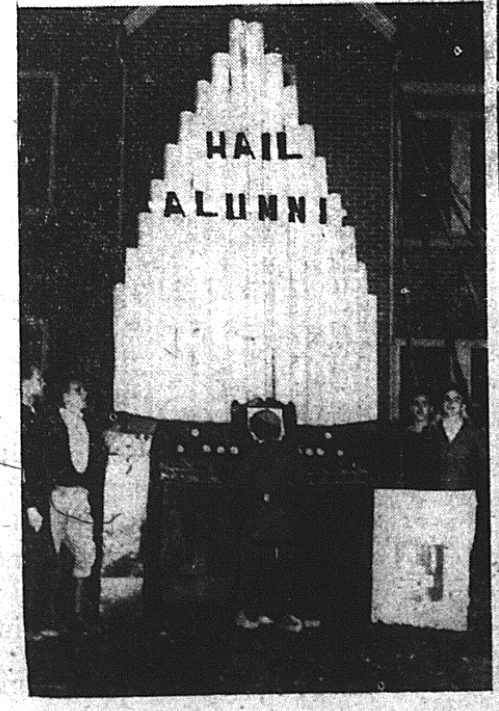 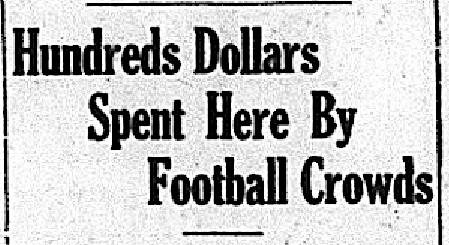 “Opelika got its first experience Thanksgiving Day of being the ‘stop-over point’ by hundreds of football fans in the overflow crowd going to and returning from the game in Auburn—and hundreds of dollars were spent here by visitors at the hotels, cafes, drug stores and gas stations, the Opelika Daily News reported. “One cafe owner said he turned away more people than he served, so huge was the crowd that packed his place.

“Quite a number of firms had Auburn’s orange and blue colors decoration at their places. Jim Biggers, manager of the Martin Theatre, has a big canvas sign across the street at the theatre bearing the words: ‘Welcome Visitors—Auburn Tigers and Florida Gators.'”

So yeah, Opelika made a killing. But ironically, Auburn got robbed.

If you’d like to help TWER continue to set sail for undiscovered countries of Auburn history, please click here.