The Wall Street Journal recently did a story on the secret pigskin passions of F. Scott Fitzgerald, about how his mostly unknown or forgotten or ignored devotion to the Princeton Tigers qualifies him as “a pioneer of the fanaticism that characterizes so many college football fans today.” There’s even this wacky you-never-know theory that his booze-fueled offensive visions, phoned in to former Princeton coach Fritz Crisler from Hollywood cocktail parties the night before each game, actually inspired two-platoon football; Crisler is credited as the first coach to field distinct offensive and defensive units.

The general consensus is that Fitzgerald’s quiet obsession with the game was a nearly life-long attempt—he was apparently actually reading and even kinda writing about football when he died—to compensate for being cut from the Princeton football team (on the first day of practice) in 1913, “a well-chronicled disappointment that some scholars believe explains the sense of rejection that permeates his novels, especially ‘The Great Gatsby.’”

I, as the editor of a website that never, ever fails to find the Auburn in anything and everything, am obviously 100 percent positive that there was a deeper motivation: The need to impress his lady, Zelda Sayre.

Back in 2012, we documented Zelda’s not insignificant legacy on the Plains, like the fraternity formed to worship her and stuff.

She was pretty much the most popular girl on campus, and she didn’t even go here (though her brother briefly did). From 1917 to 1920 or so, if Zelda didn’t made the trip to Auburn, you really couldn’t call it a dance. And scoring her for a football date was almost as awesome as scoring a touchdown.

“Auburn was certainly fortunate Saturday in having Misses Liva Hart and Zelda Sayre of Montgomery for their sponsors,” wrote the Plainsman (then the Orange and Blue) after Auburn’s 1919 win over Georgia, in which Auburn halfback Francis Stubbs, who kept trying to stiff-arm Fitzy for Zelda’s affection, dominated on defense.

But the girl wasn’t just a decoration. She was a fan–a real fan. A real rooter. Sure, her  interest may have had something to do with her having flings with, like, at least three of the 1919 Champions of the South in order to keep the yankee jealous. But still, when she spoke of Auburn’s team, it wasn’t “they”—it was “we.” As in “I knew we could do it.” She kept up with the team. She wanted to know the outcomes even of games that hadn’t made her social calendar.

Case in point: The telegram she sent Auburn’s All-Southern superstar Pete Bonner (“Care Auburn football team”) at the Piedmont (or Piedwont) Hotel in Atlanta after Mike Donahue and Auburn downed John Heisman’s famed Golden Tornado to claim the S.I.A.A. championship (that I somehow missed two years ago): “Shooting a seven, aren’t we awfully proud of the boys, give them my love—knew we could.” 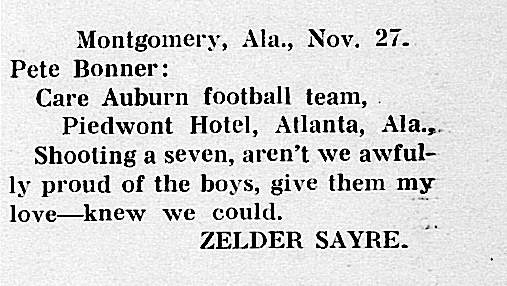 She signed off as Zelder Sayre. I’m assuming that was just another wink to an inside joke between her and Bonner and the boys, not a typo.

Another indication of her Auburn celebrity status: Hers was the only message from an individual woman (as opposed to the collective FYI from Auburn coeds about the giant bonfire still burning back on the Plains) that the Plainsman included in its collection of congratulatory telegrams.

By the way, that Auburn-Georgia Tech game was played Thanksgiving Day. Yes, the original flapper, the inspiration for the woman on the cover of the Great American Novel, took time on Thanksgiving Day to excuse herself from Judge Sayre’s turkey table to head down to wherever you sent telegrams in Montgomery in 1919 and fire off a congrats to the Auburn football team.

Fitzgerald probably had to be a football expert just to have something to talk about. 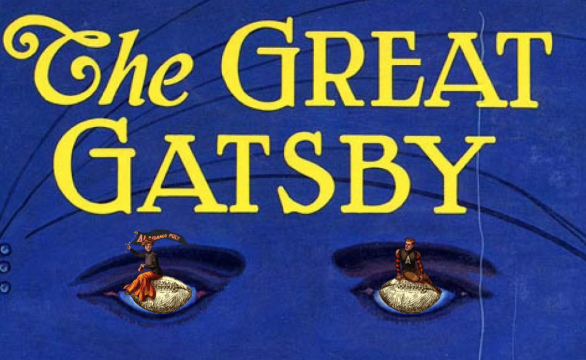 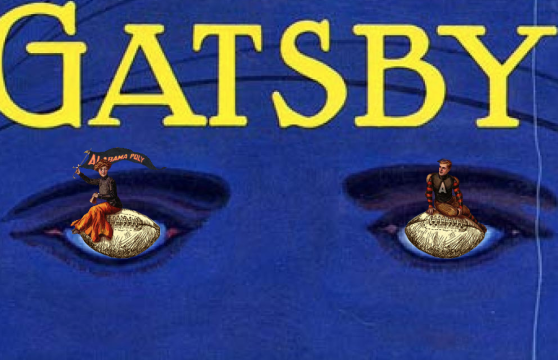 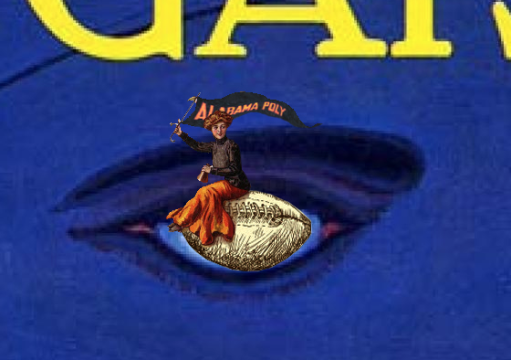