You saw it and retweeted it because, wow, yeah. But when it’s just the shirt, just a mockup, you think maybe it was just someone playing around on Cafe Press or Zazzle or something. They screencapped it, threw it on a message board, that’s it…

But no—they’re real, and they’re wearing them—at least the two people in the photo snapped by our own Van Allen Plexico who’s at the game. Because their coach is named Bill Snyder. And the first syllable of “Snyder” rhymes with “Tide”—as in the Crimson Tide, a team Auburn beat in their last meeting in the most unbelievable fashion you will ever see.

Oh, and this dude, too, who according to SB Nation, actually “went to Kansas State to root against Auburn.” 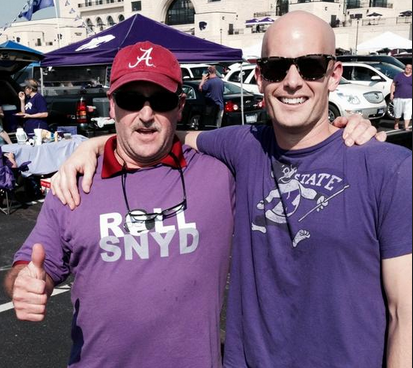 Related: The Auburn Ball Boy now has his own shirt.