In part one a two-part preseason forecast, Doug Dean first exposes the folly of the prognosticating “experts”; on Friday, he makes the case for a monster season for Gus Malzahn’s Auburn Tigers in 2014. 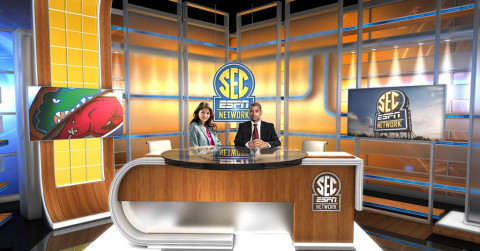 “Get your facts first, and then you can distort them as much as you please.”

With ESPN’s exciting launch of the new SEC Network, fans who are bothered by preseason and weekly game forecasts which smack of wild leaps of logic, media groupthink, and selective use of facts about teams would be well served to adjust their medication now. There is a major imbalance in the ratio of new air time for networks to fill and expertise of the new talking heads being pushed out onto the set in Charlotte, N.C.

The result will be, in the early debugging days of the SEC Network, that some of the newbie pundits like Greg McElroy will at times channel their inner Billy Madison in rambling, incoherent analysis. Just enjoy the comedic, embryonic stage of the network, and revel in its deep-fried southern flavor. Smile that we can at last tune out the obligatory homage to the Big Ten, Big Twelve, and Pac 12 conferences, which collectively have failed to seize a crystal football in eight years. The punditry may take several years to improve, but SEC fans can boast the mountain of cash the network will deliver in a Brink’s truck to the 14 member institutions, which will propel the league farther ahead in the arms race.

And if you are leaning apoplectic about the myriad preseason forecasts of the eventual champions, ruining as they do your long awaited joy that this will be your season of dreams, let not thy football soul be troubled. In terms of probabilities, they’ll almost all be wrong.

At the eight day countdown to the August 28th Texas A&M road trip to Columbia, South Carolina to take on Spurrier’s Gamecocks, some perspective on the folly of the media creation of forecasting punditry is in order. Call it an analytical haircut on often shoddy forecasting record of the gel-haired media “expert” pundits. That analysis cuts a wide swath for almost any subjectively “homer” preseason forecaster to belly up to the bar, lay down a Jackson, and take his shot. In terms of probability, preseason forecasts will all be wrong anyway . . . except mine of course.

Why do the media experts historically struggle to forecast the eventual top ten, and even the top two teams who will meet in the championship game? Because in a competition with relative parity, featuring 19-22 year olds, there is simply not reliable calculus for forecasting. New variables present each year on contenders and dark horse teams, such as coaching changes, incoming talent that may contribute, and the impact of talent losses to graduation or the NFL. Peering into this foggy lens each summer, pundits become easy prey for forecasts that are much closer to guesswork than their on-air confidence would suggest.

Obviously, no pundit gets heat for missing on the Auburn Tigers to turn 3-9 into 12-1 in shocking fashion, as one year ago the pundits bunched tightly around the crimson “three-peat” vortex which sucked media experts into its abyss (see below chart).

Of the 30 college football pundits tracked in 2013 (from ESPN, CBS, and NFL.com) not one picked either Florida State or Auburn to make the BCS Title game. Instead, here is what they predicted going into the season. Passing on Auburn was entirely logical, but with FSU’s cupcake path and talent, it’s surprising that all 30 pundits passed on the ‘Noles. Danny Kanell would have been better served to forecast with his heart instead of his Oregon-Clemson pick. 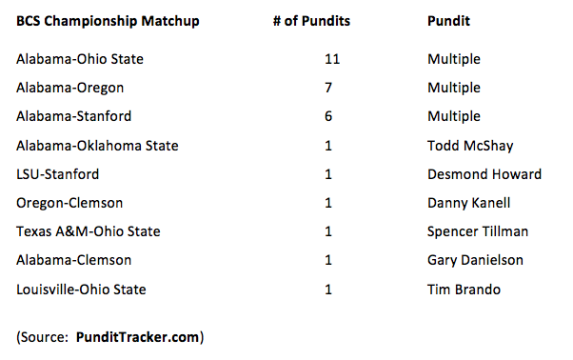 Pundit failure in 2013 was exquisite in MLB, as the baseball pundits went an abysmal 0-for-63 on predicting either the Red Sox or Cardinals to make the World Series.

It gets worse – or better, if you enjoy seeing media who cover the SEC humbled, as I do. The media consortium which assembles in Birmingham each summer for SEC Media Days votes on East and West division rankings, as well as their forecasted SEC Champion. This summer, Gus Malzahn (and 12 others) dodged a bullet. The media again smooched Alabama on the lower cheek as preseason favorite to win the conference, which is historically the kiss of death. According to Jon Solomon of CBSSports.com, the media is a miserable 4 of 22 trying to pick the correct champion and an epic 0 of 5 fail when picking Alabama as champion.

As for the AP preseason poll, the last four years, an average of 8 of the top 10 preseason teams did not even finish in the top 25.

Last season, basketball ratings guru Jerry Palm persisted in his projection of Auburn in the Music City Bowl, long after that was even mathematically possible. Hey, Jerry, put that in your RPI pipe and smoke it, and please, stick to basketball.

Despite few consistent passing grades on the pundits, fans are dazzled by Phil Steele’s reams of data and delicious acronyms like Steele’s “VHT’s” (very highly touted players) or Bill Connelly’s hypnotic delivery of statistical wizardry that he extracted from the lost Ark of the Covenant.

For example, Bill C’s schedule-adjusted ratings system called Passing S&P+ combines an offense’s passing success rate and an advanced measurement of explosive plays. If you look at the chart for longer than 60 seconds, you can actually hear Bill C whisper, “watch the shiny coin of gold, and you will do as you are told.”

Of course, Malzahn illustrated the potential irrelevance of Connelly’s Passing S&P+ correlation with championships in 2013 by going stubbornly ground-heavy. Finish with the top rushing offense in the nation and you can solve a lot of Passing S&P+ problems.

The hair product toxins have finally gotten to ESPN’s Jesse Palmer. Spanning the globe for new frontiers of possible worlds, he recently lowered the collective IQ of SEC fans, observing, “There are 11 legitimate contenders for the SEC in 2014.” He didn’t offer to share who the three non-contenders are, so I’m going with Vandy, Kentucky, and Tennessee (just for the Vol fan who ran at my SUV like a wide-eyed screaming schizophrenic last November 9, 2013 in Knoxville, until I got out of the vehicle to “say Hi” prior to Auburn’s 55-23 romp).

PunditTracker.com devotes its analysis to accountability for the predictions of pundits in sports, politics, and finance. They aim to smoke out of his hole any pundit who makes a bold prediction, and only when correct spouts about it. Their unflattering grades on some of the name prognosticators raise an eyebrow, except for Cowherd and Doyel of late. 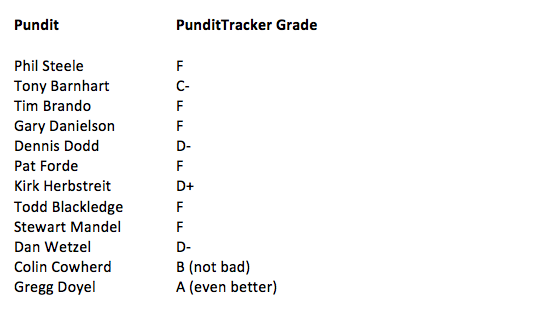 Amateur “homer” forecasters, take heart.  The data shows that the expert pundits are faring no better than a bare-assed ape throwing darts at a list of college football teams.  And while the media pundits do not take kindly to being compared to bare-assed apes, much like a stock picker trying to beat the S&P 500 Index, bet on the market!

Watch for Part II of Dean’s preseason forecast series this Friday, August 22nd, in which he picks Malzahn’s Tigers to post an 11-1 regular season record en route to a repeat SEC Championship andberth in the first ever four-team college football playoff.

Doug Dean (Eagle5 on the InterWebz) is a close observer of Auburn and SEC sports. Follow him on Twitter: @DeanEagle5. Write him at [email protected]. You can read his previous stories for TWER here.

Related: Auburn Lettermen are pretty much predicting another national championship run for the Tigers.

* What was the probability of an Auburn win before each snap of the 2013 Iron Bowl? Now we know.
* Bama wins its first national championship four years after Auburn won its first national championship
* Auburn coaches lose it after beating Florida State in 1990
* Three fun plays you never see in highlights from the 1994 Auburn-Florida game
* Philip Lutzenkirchen’s parenting advice
* Gus Malzahn, 1989
* War Eagle found not guilty