For some, it was a travesty.

For others, an opportunity. 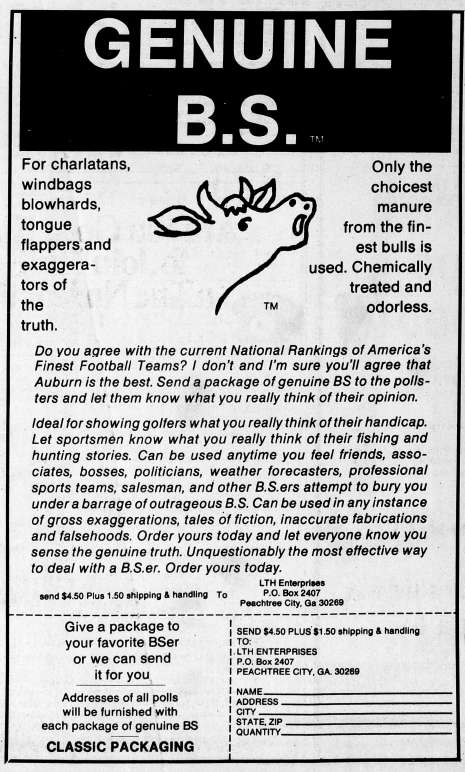 Yes, in the immediate, first issue wake of Auburn being robbed of what is commonly referred to as the national championship in 1983,  a Peachtree City, Ga.-based company, LTH Enterprises, promised Plainsman readers to send an actual package of bullsh*t or “genuine B.S.” to the AP or UPI voter of their choice, seeing as how they apparently liked it so much.

You’ll recall that the idiots kept Auburn ranked No. 3 after the Tigers beat Michigan in the Sugar Bowl, despite the No. 1 and No. 2 ranked teams both losing their bowl games. Auburn wasn’t even moved up to second—they stayed at third, before and after. Number 1? Miami, a team that lost to Florida by more than three touchdowns, the same Florida (then No. 7) that Auburn beat by a touchdown.

(The New York Times computers, on the other hand, had Auburn at No. 1 before the bowls and kept them there. You know, since Auburn had arguably the toughest schedule in the history of college football. And since they won their bowl game. And since Nebraska and Texas lost.)

Sure, $4.50 + $1.50 shipping and handling may sound like a lot for manure, but this was “the choicest manure from the finest bulls,” not to mention it was chemically treated and odorless, lest, you know, the U.S. Postal Service arrest you for domestic terrorism or something.

LTH also tried to cash in on everyday causes for revenge, like when your friend bragged about his golf game, or when it didn’t rain like the weatherman told you it would.

Related: Auburn fan tells the AP to kiss his grits.