Some sports articles are replete with oceanic depths of analysis, and game turning moments retold as Shakespearean drama.  They are rich stories from big stages, worthy of elevated prose, and on occasion, even eternal imagery like Grantland Rice’s Four Horsemen of Notre Dame.

This is a simpler tale of the normally unnoticed details of game day.  Yet, like dozens of game day details from the now immortalized Georgia and Alabama games of 2013, it begs to have a zoom lens trained on it – if only for the sheer delight.

Look closer and it’s a window into how championship organizations are marked by a passion for excellence and attention to detail in every job at every level.

This is a “just for grins” story of last season’s memorable moments as experienced through the eyes and ears of Auburn student manager Andrew Jarrett, the best damn ball boy in America.

Jarrett’s cameo in 2013 is a small porthole through which the reader can peer out into the rolling seas the Auburn Tigers rode triumphantly to an SEC Championship – a season which delivered two of the most eternal moments that will ever be witnessed in college football.

Jarrett is part of the team led by Auburn Equipment Manager Dana Marquez.  Jarrett and his fellow student managers put in 40 hours of hard work weekly in addition to their normal demands as students.   What fans do not see is the painstaking work that Marquez’s staff put into restoring a like new look on every helmet and uniform for each game.  And what fans only peripherally see on game day is the team’s work to keep starters on the field – even if a sideline sewing machine is required.

Andrew Jarrett, a junior at Auburn University, is a Georgia native who defied geographical odds coming to Auburn.

“I’m from Monroe, Georgia,” Jarrett says, “so I grew up in the shadows of Sanford Stadium.  But I’ve always been an Auburn fan, and my loyalty never wavered.”

It is just a matter of time before Nick Saban and Bret Bielema identify Jarrett as an agent of the Hurry Up, No Huddle axis of evil that threatens defensive line hulks’ safety across the fruited plain.  As the referee readies his whistle signaling a play’s end, Jarrett has already rocketed into motion with 4.8 forty speed.  There will be no play delayed over a ball delivery to draw the ire of the Master of Faster, Gus Malzahn—not on Jarrett’s watch, nor his running mates, Turk Boyles and Jake Longenecker.

It was Saturday, November 9, and the Gus Bus hit the road for the second straight week with the surging ninth ranked and 8-1 Tigers having just dispatched the Arkansas Razorbacks 35-17 in Fayetteville.  Despite the dominant performance, pundits remained skeptical, forecasting a road letdown for the Tigers in Neyland Stadium, as had befallen Spurrier in a 23-21 Vols upset of the ‘Cocks earlier in the season.

Despite a bumpy first half performance, the Tigers took a 34-20 lead to halftime on the strength of Nick Marshall’s zone reads, and a punt return housed by Chris Davis.  On the second half kickoff, Andrew Jarrett would grab the attention of the ESPN color analyst Brian Griese in a memorable line spouted at the expense of the Vols.

Corey Grant took the kick at the 10, hit a seam to the Vols sideline, and flashed tail lights to the trailing coverage team.  “The big problem,” Griese observed, “is that the Tennessee coverage team doesn’t have the speed to stay up with Auburn.”  Then, noticing Jarrett flying in pursuit of Grant to the end zone, a ball under each arm, Griese mused, “Boy, the ball boy is outrunning Tennessee’s coverage unit!”

The following week, Jarrett would again be in an enviable spot to witness the unimaginable as the Deep South’s oldest rivalry was about to serve up its most stunning conclusion in a century.

“As we lined up for the desperation fourth and 18 play, I was standing at about the 50 yard line,” Jarrett said. “When I saw Nick chunk the ball down field, I started jogging down the sideline with the ball still in the air.  I saw the ball get tipped, and pop up in the air, and I knew there was a chance Ricardo could catch it.  It’s kind of a blur what happened at that point, but I do remember I started hauling it down the sideline to the end zone.  When Ricardo hit the end zone, I just remember the explosion of the crowd, and then I extended my arms, doing an airplane down the sideline.  Everyone was in pandemonium mode.”

Moments later, Dee Ford would seal the win with a knockout blow to Aaron Murray – just deserts for the quarterback’s go-ahead touchdown that stood with the aid of no east camera view of the goal line.

So instantly immortalized was the Marshall to Louis Immaculate Deflection, you had to wonder: Did the Tigers just overdraw their good karma account for the season (if not longer)?  With the undefeated Crimson Tide pegged as a 10-point favorite coming into Jordan-Hare two weeks later, odds makers must have drawn the same tarot card for the wildly hyped Iron Bowl of the Century. Yet, this Game of the Century lived up to the billing.

Jarrett again found himself in the best seat in the house on the game’s two most unforgettable plays.  As the second half drama unfolded, the CBS cameras even caught Dana Marquez at his sideline sewing machine, frantically repairing LaDarius Owens’ curiously torn jersey.  Just before Tiger Walk for the game, Jarrett had hoofed it to the Athletic Complex to grab the sewing machine “just in case”.

Down a touchdown and facing a desperation drive, the Tigers leaned solely on workhorse Tre Mason, and pushed the chains past midfield to the Bama 39 yard line.  The trap was bait and set for Bama corner Cyrus Jones.

“As we lined up to run the play,” recalls Jarrett, “I happened to be standing right next to Rhett Lashlee, and I remember hearing him saying over the headsets to Coach Malzahn, ‘Coach, the clock’s running’.  That stands out in my mind because I could sense the urgency, yet calmness, with the clock under a minute and running.”

Then the jaws of the trap closed hard on the Bama defense.

“I saw Sammie release off the Bama corner, and when I saw Nick pull up and hit him, I started running full speed down the sideline” Jarrett said. “I was in part celebrating, and in part doing my job to get to the end zone fast.  I reached the end zone, screaming, and when I hit the back of the end zone near Sammie, my legs flew out from under me and I made a pop-up slide.  I’ll never forget the elation of that moment.”

Fans poised for what seemed an inevitable overtime period in the Game of the Century, as a mere 32 seconds remained, the 32nd and final tick awaiting its glorious revelation at the insistence of Alabama head coach Nick Saban. 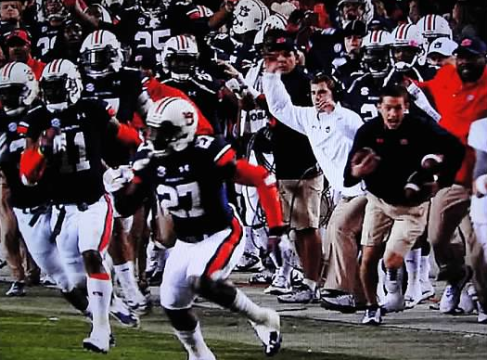 “One of my good buddies is one of the defensive signal callers,” Jarrett said.  “I was standing next to him and heard the call to substitute Chris Davis for Ryan Smith to return the field goal if it was short.  I remember looking at the Bama kicker lining up, and thinking, this is possibly a makeable kick.  This is gonna absolutely suck if they make it.  All the way up to the point Chris Davis caught it, I was worried from my angle that it might get there.  My immediate reaction was that we were likely heading to overtime, but when Chris hit the 40 yard line, I was standing right where he came the closest to our sideline.  I looked down at his feet, and saw that he clearly stayed in bounds.  And then it was obvious that he was gone, no one was near him, and we went nuts.  For a second, you always worry about a stupid flag, but the play was clean, and then the insanity began with fans rushing the field.”

How good is Marquez’s equipment team?  Remarkably, not a single helmet or football was lost in the melee as the exuberant Auburn fans took the field.

Think of every “insignificant” detail you witnessed in Jordan-Hare Stadium on November 16, or especially on November 30, 2013; pieced together, they all become significant, they all helped write what Stanford journalism student Winston Shi called “a Southland drama that exploded into being.”

“History will remember this moment,” Shi wrote.  “History never dies. History will always be here.  Even if we cannot explain what happened, the shadows of past greatness will linger in the air, and that is good enough.  On Saturday, America converged on a small town in eastern Alabama, and for a moment, Jordan-Hare Stadium held a country inside its walls.  Saturday’s game is like any moment of true, visceral significance; we revisit it again and again because each time we try to express it we come up short.”

Andrew Jarrett could not have been standing in a better spot on planet earth when it was all on the line, and history was made.

Doug Dean (Eagle5 on the InterWebz) is a close observer of Auburn and SEC sports. Follow him on Twitter: @DeanEagle5. Write him at [email protected].