The brazen, earth-friendly act of vandalism committed behind Denny Chimes before Alabama won its first national championship (in 1961)? It received nary a mention.

No, what seemed to Bama’s SGA president a clear breech of the Auburn-Alabama Better Relations Committee pact to foster goodwill among the rivals leading up to the Iron Bowl was the Loveliest of the Plains feature for the Plainsman’s BEAT BAMA issue. 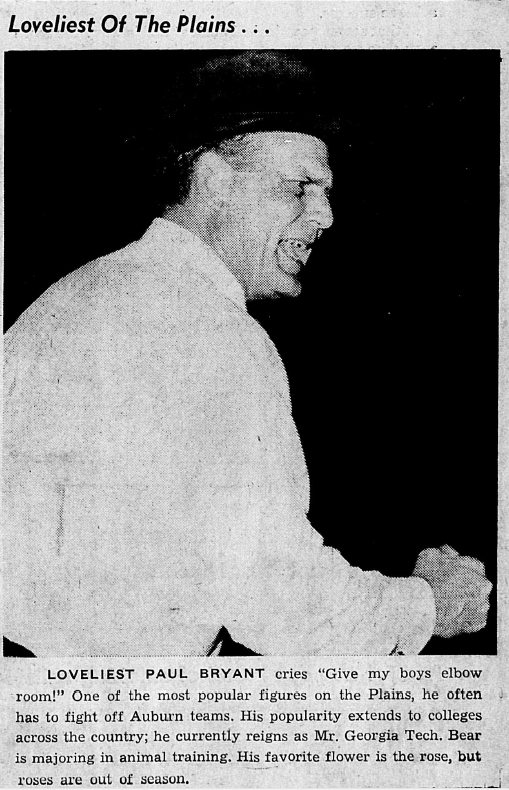 Apparently, some at Bama were still sore about the suggestion Bear Bryant instructed his players to fracture their opponents’ faces. Probably not as sore as Georgia Tech’s Chick Graning, but still pretty sore…

The perfectly named editor of the Crimson-White, Sanders LaMont, actually thought the idea of Bryant demanding elbow room for his players was “funny as hell.”

But Plainsman editor Jim Bullington still felt a need to respond to the criticism.

It may have been the first overt jab at the Bear in the pages of the Plainsman. It would not be the last.

* Bo knows Jesus
* What legendary FSU AD John Bridgers had to do during practice when he played for Auburn in the early 40s
* The great Samford Tower Mickey Mouse clock caper of 1977
* Foy Information Desk swamped with calls for days as phone number goes viral
* Alabama Shakes Brittany Howard: ‘I’m an Auburn fan.’
* Pat Dye would have killed Jerry Sandusky
* Auburn-educated astronaut wanted ‘War Eagle’ to be first words on the moon