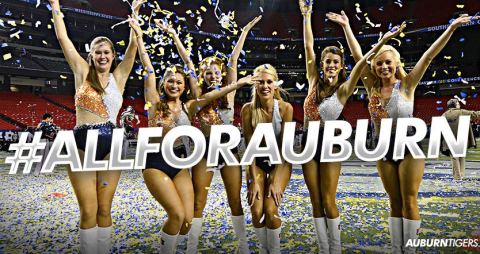 Between celebrated coaching hires and amazing seasons (see: , the past year has been pretty unforgettable for Auburn fans, and the team tasked with engaging those fans via social media is taking full advantage of it on their march to a million followers (which is just shy of Auburn senior Meghan McCarthy) with the #AllforAuburn campaign.

“Social media is something very personal where people are inviting Auburn Athletics to update them on their Facebook or Twitter,” said Jason Matheson, assistant administrator for Auburn Athletic’s Digital Media division. “When you start talking about a million people that you can reach on a daily basis, that’s pretty impressive.”

While Matheson compares his job coordinating strategy and managing content to running air traffic control for a large airport,  Twitter accounts for Auburn coaches is the one area of Auburn’s social media presence where the individual is in control of their posts.

Though Gus Malzahn is usually more reserved in his messages and social media presence, new Auburn basketball coach Bruce Pearl is an extreme extrovert when it comes to connecting with fans online, Matheson said.

Matheson says it’s no coincidence that Pearl’s follower count on Twitter began to skyrocket around the time he arrived in Auburn.

“We shot a ‘day in the life’ video the first day and there’s a clip in there where he’s holding his phone and he tweeted and invited students to come and have pizza at the intro,” Matheson said. “Bruce said something about how he’d already added 7,000 people to his Twitter feed that first day, and that wasn’t even half way through the day.”

With such a dramatic increase in attention, Matheson says Auburn can no longer rely on the “shotgun” method of pushing out the same photos and videos on all of it’s platforms.

The process is challenging, especially when catering to multiple demographics, but makes for a much smarter form of advertising when used correctly.

It also helps to have such an engaging online fan base, too.

“At the rate we’re going, I’d say we get to a million followers by July 1, at least,” Matheson said.

Though they don’t release videos shot by fans under the official Auburn Athletics banner, digital media administrators do compile their favorite videos from around the internet to showcase on the program’s YouTube account.

One of Matheson’s favorite user-made videos is a compilation of videos recorded inside Jordan-Hare and around the country by people watching the final play of the 2013 Iron Bowl.

“When you watch that raw emotion, you don’t even have to explain it,” Matheson said. “You just say ‘watch this’ and people get it immediately. They realized how big a deal that was, just by watching everyone’s emotion.”

More than 80 percent of Auburn’s athletic programs have a Twitter feed in the top 25, in terms of follower count.