A freshman suddenly eligible under the new varsity regulations, Wilson was punter and place kicker on Auburn’s 1972 Amazins squad that overcame preseason predictions to enter the Iron Bowls with an 8-1 record.

“They needed someone to kick off that year,” he says. “Gardner Jett was all SEC that year.  He was real accurat,e but he didn’t have a real strong leg, so I kicked, we held’em, Newton blocked the punt, Langner ran it in, and then I kicked off again.”

“We had made only one or two first downs the whole day and a good third of Alabama’s side had left the stadium because the game was so lousy,” Wilson says. “When Langner ran it in and we ended up beating’em, 17-16. It took us about two hours to get off the field that day.”

At 59, Wilson has no shortage of Auburn memories, several of which can be found in Walk-On, the 2008 memoir by teammate Thom Gossom, Auburn’s second black football player, who nicknamed Wilson “Fat Daddy.”

“Fat Daddy did his best to keep us (Gossom and teammate James Owens) laughing, and his exploits are legendary,” writes Gossom in a chapter titled “Fat Daddy and The Zoo”—”the zoo” being the name given the athletic dorm by outsiders, according to Walk-On.

Speaking of zoos, Wilson and his wife Roxie are owners of The Zoo Gallery, an eclectic collection of home furnishings, jewelry, clothing and artwork produced from local artists that that the two opened in Ft. Walton Beach, Roxie’s hometown, in 1979. 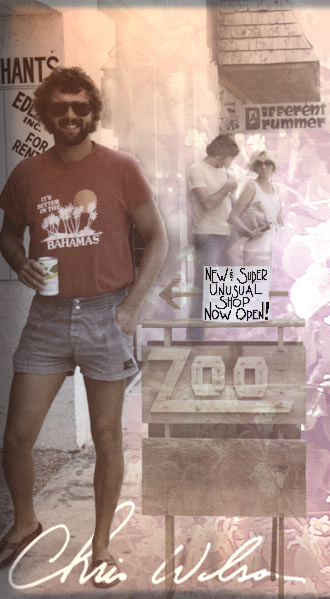 The couple met while attending Auburn and were married at the Moore’s Mill house of Art Professor Hugh Williams in 1975; both of their children graduated from Auburn as well (in 2004 and 2010).

“We were trying to do something different around here,” Wilson says of the business. “At the time everybody was doing tourist-trap airbrush stuff, like hermit crabs and coconuts. Nothing really nice like handmade pottery or jewelry.”

Now in its 35th year, The Zoo Gallery has since expanded across the state, with current locations in Grayton Beach, Miramar Beach, and Destin.

Wilson also fondly recalls Auburn’s great 1974 season (10-2), as well as the end of “Shug” Jordan’s tenure as Auburn coach (“A gentleman, even if he was getting old”). But he still considers those final moments against Bama in 1972 his finest hour ever as an Auburn Tiger.

* I Survived the Kopper Kettle Explosion and all I got was this t-shirt
* Erin Andrews at Toomer’s Corner
* The Ron Swanson Pyramid of Auburn
* Montgomery Business that de-toilet papers Toomer’s busier than ever
* Auburn’s Miss Universe contestant, Audrey Moore
* Auburn amputee has tiger-striped prosthetic legs
* Model Molly Sims spotted at the Iron Bowl in an Auburn jersey