Kelsey Woodworth was in line to have her copy of B.J. Novak’s book One More Thing: Stories and Other Stories autographed when she made the decision that would drastically alter the rest of her evening.

“I thought I would just give B.J. my phone number, whatever,” Woodworth said. “My friends thought it was dumb, but I was like why not, we’re never going to see him again.”

Woodworth invited the star of NBC’s “The Office,” who was in town to do a standup show on Auburn’s campus earlier this month, to join her and her friends for dinner, drinks, at the Thursday night comedy show at local eatery The Hound on N. Gay Street.

Less than 30 minutes later, he arrived.

“I just turned and waved him over and he just walks over and sits with us and had dinner and drinks with us,” Woodworth said. “He was like ‘I really appreciate you guys inviting me, you seemed cool and I wanted to check out a local place,’ so that was that.”

Novak’s stop in Auburn wasn’t listed under tour destinations on his website. He fit The Plains in between stops in Los Angeles and New York, pulling material from his book and his standup act to fit the show time, Woodworth said.

“I was kind of expecting him to have a little bit of an entourage,” Woodworth said. “It was really funny just seeing him wander into The Hound looking like a lost puppy.”

The Hound’s back room was dark enough for Novak and Woodworth to watch the show mostly in peace.

Woodworth said the double takes didn’t begin until Novak got up to shake everyone’s hands after they performed. 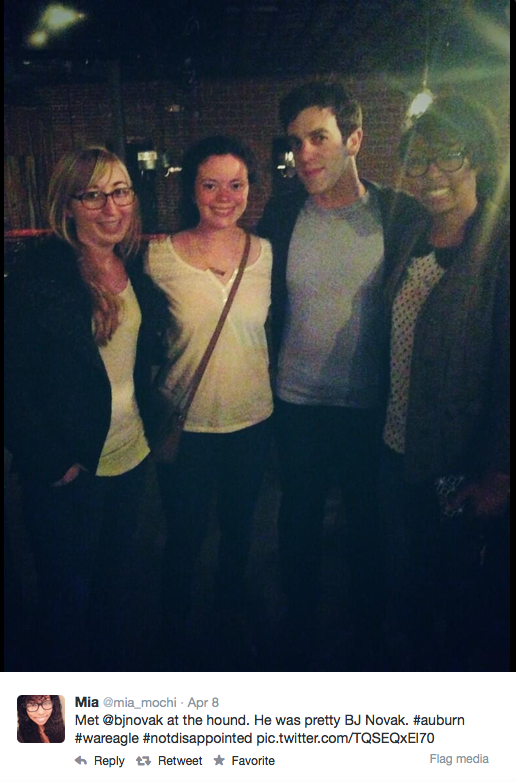 “No one made any jokes or anything,” Woodworth said. “I don’t think anybody knew he was there because it’s so dark during the show.”

Woodworth says Novak stayed in The Hound with his new Auburn amigos four more than four hours, fist-bumping the comedians that had performed and discussing his new collection of short stories, as well as his first impressions of Alabama.

“We were asking him if any stereotypes of the south have been proven true and he said definitely the pace of life,” Woodworth said. “I guess his hotel room had a coffee pot, but no coffee and he called the desk to see if he could get some coffee and it took more than half an hour. This little old man came up and was just poking around his hotel room like “what is it that you need?” and he was like ‘coffee!’”

Related: B.J. Novak tricked Auburn students into shouting ‘We love you John Krasinski’… for a message on Rainn Wilson’s voicemail.