UPDATE: Turns out one of the professional photographers who descend on the annual love fest actually zoomed in on Scott mid smooch. And it was an important one. Little did he know he was capturing history.

“Looks like a photographer got a shot of me kissing my record-breaking number six Wellesley girl,” he said.  “She had a sign saying ‘Kiss me, I’m from Alabama.'”

The record-breaker was a Kiss Me from Dixie? It’s kiss-met! 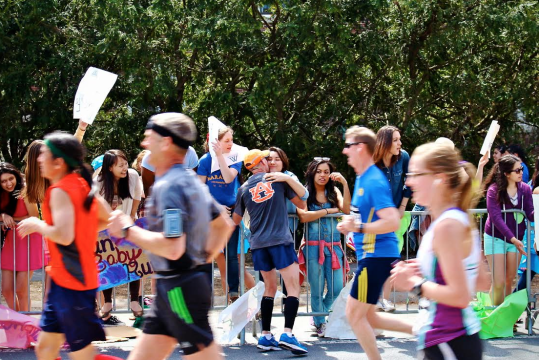 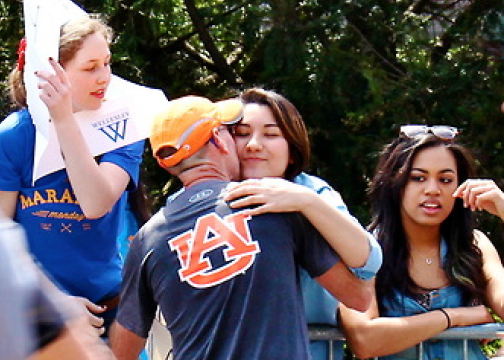 “I stopped, jogged back a few steps and gave her a quick peck on the cheek.”

“My War Eagle T-shirt got lots of attention,” Walker says. “Especially from the girls at Wellesley College!”

Wellesley? Had Auburn had been adopted as the team of choice by yet another private Yankee college? Could they actually have been LSU women?

Nope, Wellesley women. It’s apparently what they do.

“Just prior to mile 13 the marathon route passes by Wellesley College,” Walker explained. “For almost as long as there has been a marathon, there have been the girls from Wellesley out cheering on the runners.  They line the course on one side of the road only and the sound level can be deafening.”

I guess they don’t call it The Scream Tunnel for nothing.

“In addition to screaming, almost all hold signs asking for kisses,” Walker says. “The signs can be very funny: ‘Kiss me I’m a senior—and a little drunk,’ ‘Kiss me, my major is kissing,’ ‘Kiss me, I have an app for that,’ ‘kiss me I’m from Alabama,’ etc.”

“So what’s a runner to do?  I stopped and got a record six kisses…. plus had them take a photo of the occasion.”

The pucker up pit stop cost him an hour and one minute off his best Boston Marathon time, or at least it didn’t help. In 2010, Walker, an Auburn resident, says he ran a 3:33. This year, he clocked in at 4:34, his slowest time in five races.

“I ran a horrible time and I am blaming it on the ladies.”