Lance Cpl. Kyle Carpenter, USMC, was nominated for the Medal of Honor in 2011. Last week, he learned he will receive it.

Carpenter served in Afghanistan, specifically Helmand Province, where in 2010 he put himself between a fellow Marine and a Taliban hand grenade.

He lost his right eye, which he has since replaced with a prosthetic bearing the Purple Heart. Most of his teeth were knocked out of his head. His face was blown apart. His arm was mangled. His best friend in-country was seriously injured, but survived.

Carpenter, a South Carolina native, was 21 at the time. All he remembers, he says, is a white flash and then a fellow Marine telling him he would be OK and a voice that said “Oh my God.” He woke up in Germany a month later with family at his side. He has been through dozens of surgeries, with more to come on his long road of recovery.

In 2011, Carpenter’s story received national attention after a photo of him being honored by the South Carolina state legislature, which credited him with taking “the full blast from an enemy hand grenade in seeking to save a fellow Marine”, went viral. 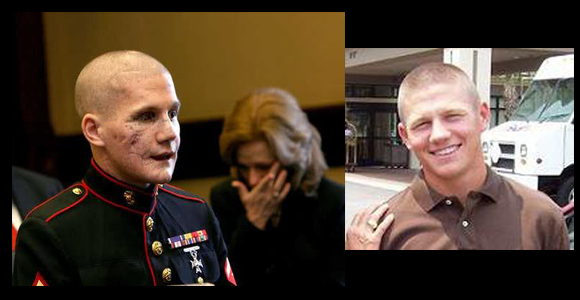 Carpenter’s story also caught the eye of Gameday for Heroes, an organization started by members of the Columbus-Phenix City Auburn Club that hosts soldiers for Auburn football games. The group was one of several that helped facilitate Carpenter’s visit to Auburn for the 2011 Alabama game.

Carpenter and his family received president’s suite passes. He was honored  at the game. He shook hand after hand after hand. He was flown back to Walter Reed Army Medical Center in AU’s private jet.

“Guys are coming back to the United States every single day missing one, two, three, all their limbs. There are men and women over there that are getting shot at and blown up as we speak,” Carpenter told al.com. “As we sit here and have a great time at the Iron Bowl, there’s guys over there that haven’t had a shower in five months or are getting in firefights every day. People need to know how serious it is.”

Carpenter is a lifelong Auburn fan. His father went to Auburn. He had been to Auburn games before, but 2011 was his first Iron Bowl.

“The Auburn staff and faculty stretched out an extra hand when they didn’t have to,” he said.

For more photos of Carpenter at the Iron Bowl, go here.