On the night of Wednesday, May 18, 1977, the hands of the great Samford Tower clock were fitted with white gloves and iconic face of one Mickey Mouse.

It’s arguably the greatest Auburn student prank not involving nudity of all time, or at least the 20th century.

For whatever reason, the giant Disney dial actually stayed in place for nearly a week. A photo of the display quickly made the AP wire and popped up in papers across the state and country. Auburn was abuzz with the whodunnit (was it a fraternity? It had to be a fraternity…)—and the even more mysterious howtheydunnit (how much scaffolding did they need?) for days.

If you were in Auburn time, chances are it’s still a mystery… unless you happened to pick up the issue of the Plainsman two years later in which the three, yes, students behind the shenanigans—Jim Dunaway, Scott Farr, and Jesse Evans—finally came forward to take credit for the caper.

Dunaway says a friend of his, Butch Wolf, actually came up with the idea while the two were walking to class in 1976. They talked a little about how someone might pull it off. Then they forgot about it, for a little while at least.

The plan was resurrected a year later, and shared with Farr and Evans. 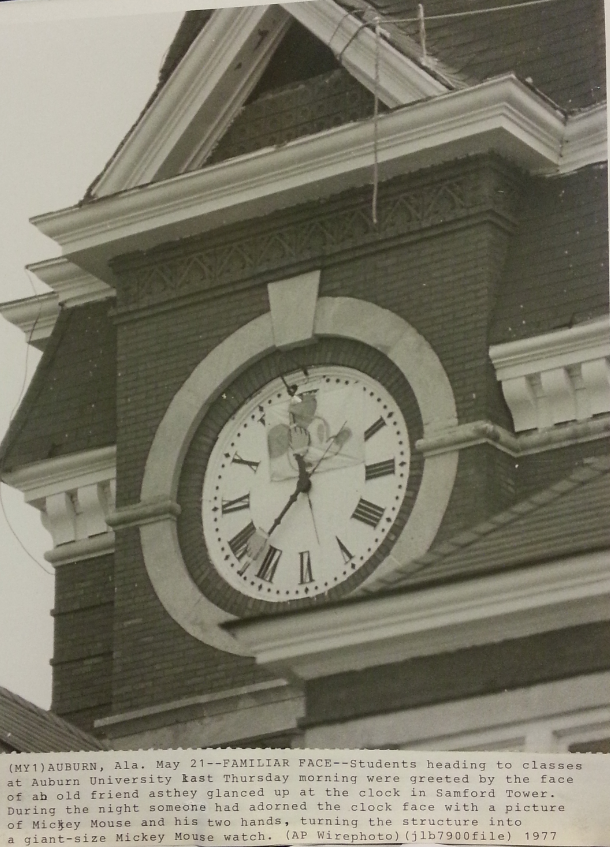 “We talked about it in Alumni Cafeteria,” Dunaway told the Plainsman for a story headlined “Mickey mystery finally solved.” “The only thing was trying to figure out how to get the face up in the clock. Some workmen were repairing Samford Tower’s roof that quarter, so the building was constantly open. On May 17, I went in the building and walked around. I found the attic door unlocked and the ladder leading up to the top of the tower.”

That was Tuesday. On Wednesday, Evans, an art major, painted the Mickey Mouse face on a white sheet. The hands, which were painted yellow and outlined in black, were cut from cardboard. He met Dunaway and Farr at Samford Hall at 9:45 that night, sheet and hands in hand. They entered the building.

“We were all scared, especially when the clock rang. You see, this was a couple of quarters before the carillon was put in,” Farr said. “When the clock struck 10 p.m.it didn’t play a song like it does now.  Instead it just gong a very loud gong. We must’ve jumped 20 feet.

“While we were in the building, I just knew the campus police were going to catch us and (AU President) Philpott would throw us out of school.”

Actually, unlike Jello on the sidewalk and detergent in the Haley Center fountain, Auburn’s president almost seemed to appreciate their work. “I enjoy a good, clean prank,” Philpott later said, especially one so impressive.

“We didn’t have to use ropes, snap links or anything. We simply turn the knob of the attic door and started climbing the ladder,” Farr said. “Once in the room with all the gears for the clock, we found that the number 12 comes out like a door, making it 2 ft. hole in the clock face to work with.”

That’s all skinny-shouldered Dunaway needed. He leaned out, tacked up the face, and then affixed the hands with masking tape (which was barely visible in the main photo of the de-Mouse-faced clock circulating at the time).

It went off like clockwork… so well, in fact, that they actually considered a repeat performance a year later.

“We are feeling pretty good one night so we tried to go back into the tower just to see if we could,” Farr said. “The building was open, as it always is, however the attic door was locked tight. A patrolman for the campus police spotted us in the building and asked us what we were doing there. We gave a real weak excuse and he told us to leave the building.”

They may not have made it back in. But they inspired others who did… you know, like Apple CEO Tim Cook.

* Show Some Pigskin: An Illustrated Guide to Auburn’s Playboy All-Americans
* A complete set of 1988 Phil Neel’s Auburn pinback buttons
* Cam Newton on the cover of GQ
* Pat Dye would have killed Jerry Sandusky
* Auburn-educated astronaut wanted ‘War Eagle’ to be first words on the moon