I’ve kind of thought that even if you hate the idea of Auburn claiming additional national titles (that it has as much a right to as anyone), you’d at least be able to appreciate what it would do to Bama fans.

I mean, here’s this fanbase that has made you hate the number 12 and then the number 13, 14… a fanbase that for years has held up its magically-doubling national championship record like it was the deed to Tradition (TM) itself… and we could raise that glorious 1913 flag and be all 1925? Girl, please…

But it’s so easy to forget that there’s a generation of Auburn fans that already knows that feeling. 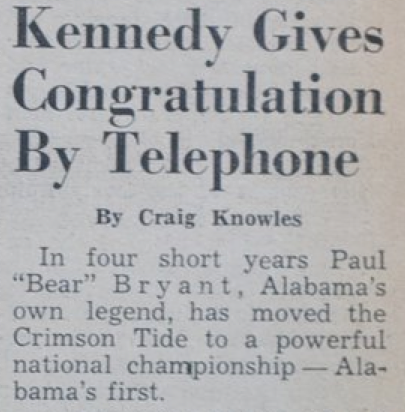 It’s one thing to see their old T-shirts and media guides, and to read the confession of the weaver who spun the emperor’s invisible Got 12? T-shirt in the mid-80s.

But putting an ear straight up to 1961 really hits home how radically Bama’s football history has been rewritten. Here’s more, from the sports section of the same issue, Dec. 7, 1961:

That’s a little hard to read, but the money line: “This is the first time in history that the Crimson Tide has been honored with the mythical title of National Champions…”

There was actually a third team—Tennessee put the crown on first, in 1951—but hey, who’s counting…

HELP TWER KEEP ON KEEPIN’ ON.