It’s been a thing for a while, sure. You’d be talking football with your dad and go “I mean, if we counted national championships like Bama, we’d have like, five or six more or something.” You knew it was true—anything good about Auburn has to be true—but it’s not like you could really talk intelligently about it. Because when it came to keeping up with the Jones’ and their tacky Got 12? bumper stickers, Auburn fans were mostly concerned with debunking Alabama’s championship history than we were celebrating our own.

However, over the past year (and among those that care), that mentality has begun to change, no doubt thanks to the work of Birmingham lawyer and 1982 Auburn grad Michael Skotnicki.

Skotnicki’s book, Auburn’s Unclaimed National Championships, laid out a powerful argument that Auburn’s Athletic Department has not only a right to officially recognize seven additional Auburn teams as national champions, but a duty—to the champions themselves. Just over a year after it was published, Jay Jacobs and Co. seem on the verge of doing just that. And not just with asterisks in media guides, but with rings on fingers.

At least that’s what Jacobs told Kevin Scarbinsky in a story published just hours before Auburn played for what AU, so it seems, would have eventually counted not as the Tigers’ third, but eighth, ninth, or maybe even 10th national championship.

Jacobs said Auburn has been studying the subject, and there’s a good chance you’ll see other special teams from the past earn the same recognition from the school itself. He wants input on the subject from Auburn fans.

You’ll notice one of Auburn’s undefeated teams not on Jacobs’ list. It’s Terry Bowden’s 1993 team, which went 11-0 but was denied a chance to play in the SEC Championship Game and a bowl game because of NCAA probation from the Dye regime.

For that reason, Jacobs said, “the only one that gives me a little pause is 1993,” even though the National Championship Foundation named Auburn as a champion for that season retroactively.

“What you don’t want to do is make somebody think you’re making something up,” Jacobs said. “But if other schools are claiming their championships, why shouldn’t we claim ours?”

It’s by no means a done deal. Banners haven’t been hung yet. But for Skotnicki converts who interpreted Auburn not taking advantage of the 100th anniversary of the 1913 season as the the perfect opportunity to at least recognize the team arguably most deserving of a retroactive crown as national champions as meaning that they never would be hung, that the momentum Auburn’s Unclaimed National Champions had given the Claim’em If You Got’em movement leading up to the 2013 season had stalled, Jacobs’ comments are cause to celebrate.

So what’s Skotnicki, the MVP of maybe four or five or however many teams Auburn may ultimately deems worthy of recognizing as national champs, think about the news? I asked him. (You can read our previous interview with him here.)

What was your first reaction to Kevin Scarbinsky’s article? What did you think of the timing of the article?

My first reaction to reading Kevin Scarbinsky’s article quoting Jay Jacobs’ statement that Auburn was planning to claim additional national championships for certain past seasons was that I was a bit surprised. I provided copies of my book, “Auburn’s Unclaimed National Championships,” to Auburn and knew that it was an issue being considered within the Athletic Department, but I had no idea that such a decision had been reached, so it was unexpected although certainly welcomed. I was pleased that the decision was made public before the BCS Championship game because I don’t believe the eventual outcome of that game, a narrow last-second loss, should influence the decision.

What about the reasoning he seems to be bringing to the issue: “But if other schools are claiming their championships, why shouldn’t we claim ours?” 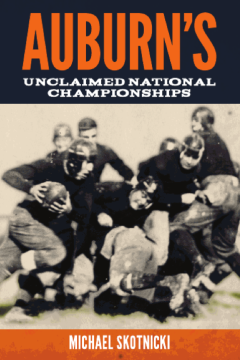 It’s is a very smart and decisive strategic decision on Auburn’s part to establish the standard for the number of national championships that Auburn has won prior to the beginning for the four-team playoff system. The playoff system will finally eliminate the 100-year old problem of how college football can decisively anoint a single team as the uncontested national champion. Even the BCS system didn’t completely provide the answer, as both LSU and USC claim to be national champions for the 2003 season. Until now, Auburn has clearly been using a much stricter standard than many of its SEC peers and other colleges nationally in determining what seasons in which it can rightfully claim to be called a national champion. Adopting a standard like those used by other schools is more reflective of Auburn’s true status as one of the nation’s elite college football programs. In recent years schools such as Texas A&M, USC, and Minnesota have added long past seasons to those for which they claim a national championship, so such a decision by Auburn is certainly not groundbreaking.

How does it feel to know you may have actually achieved your goal for the book… that you are (potentially) responsible for a move that could shift the sense of historical identity of the entire Auburn football program and Auburn fan base?

As an appellate attorney, I felt that after studying the history of Auburn football, a very strong case could be made that Auburn should adopt a standard like that used by its peers and claim additional teams as national champions. If my book, which consolidated all this information in one volume and pleaded the case for these teams, helped to play a role in the Athletic Department’s decision, then I would certainly be honored. I think maybe it helped bring more attention to the issue, but the facts regarding those Auburn teams clearly speak for themselves. Auburn has a long history of greatness in college football going back over 100 years that even many Auburn people don’t realize because not enough attention has been brought to the Donahue era when Auburn dominated football in the South. In this age the greatness of a program is often measured by the media, fans, or football recruits using the yardstick of how many national championships it has won. Certainly Auburn, in determining this number, should use the same type of standard used by its peers rather than one which only short-changes its championship tradition in comparison to others. Jay Jacobs’ decision that Auburn will claim at least some of these additional national championships will result in Auburn’s national championship total more accurately reflect its status as a longstanding elite football program.

What do you think the reaction will be if the championships are officially acknowledged? From Auburn fans? From other (Bama) fans? How likely, judging from your take on the story, do you think it is that it actually will happen, to whatever extent?

I firmly believe that this is a decision that the vast majority of Auburn people want to happen and will strongly support when made official. I’ve had many people tell me that while they previously were against the idea of Auburn recognizing additional seasons as national championships, once they read my book and truly understood how deserving those teams were and that Auburn has been using a much stricter standard than other schools, they completely changed their mind. I really don’t think you can read Auburn’s Unclaimed National Championships and have any opinion other than that some, if not all, of the national championships should be claimed.

I don’t think the University of Alabama or its fans cared much what Auburn people thought when back in the 1980’s it decided to add five seasons to those it claimed as national championships, so while I certainly think Bama fans will be critical of such a decision by Auburn’s Athletic Department to similarly add to its national championship total, I don’t place any importance on their opinion. Auburn doesn’t let Alabama decide any more where we play our home game for the Iron Bowl, and Alabama shouldn’t have any influence on what seasons Auburn should recognize as a national championship team.

Given the public nature of Jay Jacobs’ remarks and publication in an article by Kevin Scarbinsky, I’m certain this is an issue that has been given thorough review and consideration within the Athletic Department and was not simply an “off the cuff” remark. While perhaps the final decision as to what Auburn teams will be officially acknowledged as a national champion has not yet been made, I’m confident that the decision to recognize at least some of them is indeed final.

What about Jay Jacob’s hesitation when it comes to 1993? Why do you think only that year would give him “a little pause”?

Auburn’s Unclaimed National Champions is available from Amazon in paperback and on Kindle.