Here’s a humorous, heartwarming story from 1976 Auburn grad David Giles that really doesn’t need any standard story splicing or “Giles said” or extra color or anything. I mean, it includes the line “decapitation by bomb scare”—we can’t do any better than that. Take it away, David:

Here’s a true story I would like to share about the life and times of our Toomer Oak.

I received a Toomer’s Oak seeding some years ago as a gift. Initially we potted it having not deciding where to plant it in the yard. While in the pot, the tree we had named Bud after my wife’s uncle, survived two hurricanes.   A few years back we transplanted Bud from the planter to our yard on the banks of Choupique Bayou near Sulphur, La. Bud had been root bound in the planter and was stunted. It looked like a bonsai tree. Some time after we planted him in the yard, bridge inspectors found what they thought was a bomb under the bridge behind our house.  So an actual real life bomb scare led to about half of the Calcasieu Parish Sheriff’s Department, fire departments, Emergency Response departments and Fort Polk Bomb Squad to descend upon our backyard. Turned out to be a big firecracker in a Slushie cup. The following weekend I walked down to the bayou and I noticed Bud was gone, broken off completely at the ground. The little trunk was lying in the edge of the bayou, its leaves already browning. It was a sad sight.

No one every took responsibility for the heinous act. I contacted the Sheriff’s Department. They suggested maybe the bomber had broken the tree (it hadn’t gotten out yet that it was only a firecracker). Needless to say I had my doubts. I just could not envision someone intent on planting a bomb taking time to break a tree. I suspect in the tense moments surrounding the disarming of the “device” some official inadvertently broke Bud. I had no hope the tree would come back to life ,but in a couple of weeks some new sprouts appeared.

I contacted Auburn and was told that I should select the best shoot from the stub, trim back the rest and the tree should be OK. It worked. Bud has grown to over seven feet tall. The tree was doing great. Well that was up until a couple of weeks ago.

I was nearing completion of a shop/man cave building in my back yard fairly close to Bud.  I had warned the contractor to be extremely careful around the tree.  Generally he has been, except when his workers set off a blazing inferno about 5 feet from the tree. A strong north wind is all that saved Bud that day.  I gave the contractor another warning about the tree. He in turn warned his subcontractors and all was well until the tile installer came.  I should have known there would be issues since his van sported a big Alabama “A”.  The guy was nice enough and did a great job with the tile. I told him about Bud and he seemed supportive saying that it was a shame what had happened to the Toomer’s Oaks.  He told me he would be very careful around the tree.  Toward the end of the job he had his helper, with no known school affiliation, back his van up.  Well, he backed right over Bud laying the tree completely flat but not broken.  I was taking a nap at the time so I didn’t see the carnage, the contractor was panic stricken but got the helper to drive the van off Bud. They all worked to straighten the tree up best they could.  When I woke from the nap I was greeted by the contractor hat in hand, and he told me the sad tale.  I have to say Bud looked pretty rough with broken limbs and a big gash in the bark down the trunk.  After pruning his broken limbs, Bud is putting out new growth and it looks like he will survive yet again.  Bud has a distinctive lean now which I think gives him more character.

So Bud has survived a period as a bonsai, two hurricanes, decapitation by bomb scare, fire and now being run over by a Bammer fan van. Who knows what’s next? There has been this pesky beaver around that has taken down two nearby trees (don’t worry, I put a wire cage around the trunk).  It just goes to show the Auburn spirit is alive and well in Cajun Country.

Here’s Bud after the Iron Bowl: 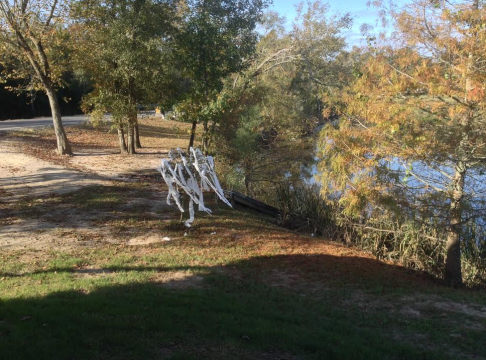 Related: Awesome laser scan drawing of Auburn’s Toomer’s Oaks to be housed in Library Of Congress.