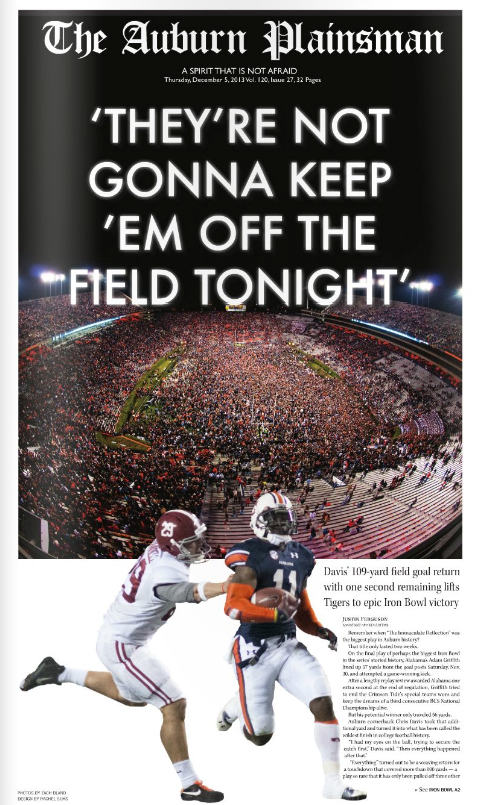 When Chris Davis turned the corner and found open field, he not only ran his way into college football history.  He also set off a media rave that extended nationwide.

For those of us who were at the Iron Bowl on either side, the result is only half the stun.  Almost as amazing is the attention this has received — Diane Sawyer onABC World News Tonight, Brian Williams on NBC Evening News, Hoda and Kathie Lee on NBC Today … Heck, even The View folks almost (almost) stopped talking at the same time in discussing it.

But much more important than that (my other bias showing) is what was written about the event.  Most of it was pretty good, but hey, they were working from great material, right?

Here then is the best of the Iron Bowl articles and columns, but only in my opinion.  And we are talking writing here.  No YouTubes, as much as they bring allergy-blamed tears.  I will present the worst of the post-Iron Bowl articles tomorrow.

Share your own links and suggestions below.  Good writing extends and deepens the joy of the moment for Auburn fans, but hey — it’s what journalists do:

First, of course, a shout-out to The Auburn Plainsman for their Iron Bowl issue that dropped today.  That student newspaper holds an even bigger place in my heart than Davis’s touchdown run, and it was great to see the students come through.

Continuing in that vein, and recognizing that I am a 57-year-old ink-stained wretch, I would recognize the six-headed monster that is the Auburn beat writers — those who represent the traditional media and labor daily and well, 3-9 or 11-1. They wrote a lot. Some of it was repetitive.  I saw at least five different versions of “Five Things Auburn Must Do to Beat Alabama.” But most of it was darn good.

Here is the best of each, in alphabetical order:

Ryan Black, Columbus Ledger-Enquirer: The youngest newest members of the crew.  He wrote one of the few reports on Kevin Scarbinsky’s criticism of Tre Mason (more on that tomorrow) and Mason’s response.  Not everyone confronted the issue, but Black did and also provided insights on social media and team policies.

Alex Byington, Opelika-Auburn News: The other new member, he took a unique and local semi-social media take on Corey Grant receiving congratulatory text messages from Alabama fans.  A brief, but a well-conceived and creative one.

James Crepea, Montgomery Advertiser: Crepea churns out the unique story angles quickly and well.  His public records-fueled reports on Auburn hiring security personnel to monitor curfew was textbook reporting.  This week, he stayed on top of the Gus Malzahn contract renegotiations, way before any false rumors could be planted.

Joel Erickson, al.com: The only state sports journalist to choose Auburn to win, Erickson wrote one of the better game stories.  That’s tough to do under normal deadline pressure, but imagine trying to wade through the Auburn student body to do it.

Brandon Marcello, al.com: Marcello and Erickson are a tough combo to stay ahead of, as evidenced by Marcello’s Monday article on cremated remains [Ed. note: Following up on a TWER report] being discovered on the field.  Marcello’s previous experience in Arkansas work generated an insightful look at Malzahn’s time there.

As you read over these folks’ stuff, consider subscribing to their parent newspapers or to their websites.  This stuff doesn’t come cheap, and we need to do what we can to help keep these folks and their organizations in well-funded business.

I don’t subscribe to any of the fan sites (I’m too cheap), so I cannot make choices from there — which is also fortunate from length considerations.  But I will note a few of the better nationwide articles.  If you haven’t read them, I would suggest you check these out.

Perhaps the best national gamer that I read came from Pat Forde of Yahoo Sports.  I know that Auburn fans have issues with him, but I read articles, not bylines, and his words have a flow that capture the emotion and satisfy those seeking a quality read.

After Rachel Bachman begged Auburn to end Alabama’s dominance, it’s only right that we should also mention her game report.  Her musings on whether Auburn’s win would end the SEC’s BCS streak were on point, though depressing.

I’m a big fan of Richard Sandomir’s sports media reporting in the New York Times, and his article on Rod Bramblett’s calls of the two winning touchdownssilenced critics who thought Rod was too emotional.  I will own up and say I used to be one of them, but Rich-Rod convinced me otherwise.

I’m including Spencer Hall’s piece in the SB Nation “Every Day Should be Saturday” website.  I’ll be honest; I didn’t 100 percent track with it.  But Hall was pushing for a different tone in describing the end of the game, and a lot of folks got it.  I’ll give anyone credit for swinging for the fence.

As I said, you readers can extend the experience down below, with your recommendations.

It wasn’t all good, of course.  But I’ll save the worst for tomorrow.