But still, it’s always nice to be recognized. 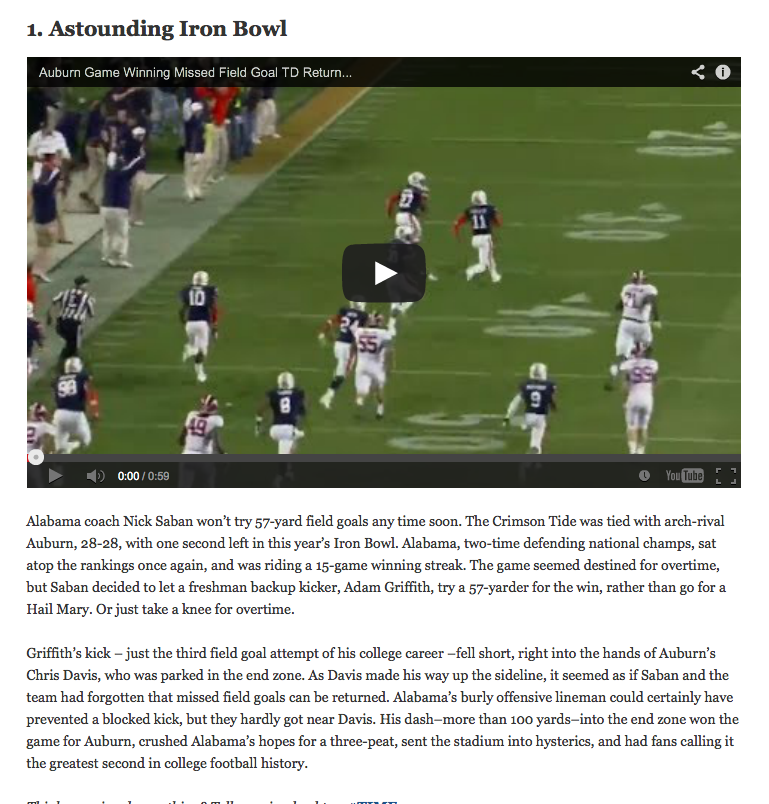 Alabama coach Nick Saban won’t try 57-yard field goals any time soon. The Crimson Tide was tied with arch-rival Auburn, 28-28, with one second left in this year’s Iron Bowl. Alabama, two-time defending national champs, sat atop the rankings once again, and was riding a 15-game winning streak. The game seemed destined for overtime, but Saban decided to let a freshman backup kicker, Adam Griffith, try a 57-yarder for the win, rather than go for a Hail Mary. Or just take a knee for overtime.

Griffith’s kick – just the third field goal attempt of his college career –fell short, right into the hands of Auburn’s Chris Davis, who was parked in the end zone. As Davis made his way up the sideline, it seemed as if Saban and the team had forgotten that missed field goals can be returned. Alabama’s burly offensive lineman could certainly have prevented a blocked kick, but they hardly got near Davis. His dash–more than 100 yards–into the end zone won the game for Auburn, crushed Alabama’s hopes for a three-peat, sent the stadium into hysterics, and had fans calling it the greatest second in college football history.

h/t TheAuburner
You can check out the also-rans here.