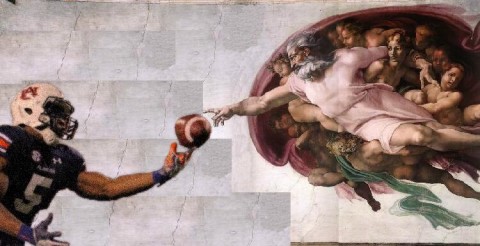 Darkness had fallen. The giant lights of the stadium shined in the darkness, but the darkness ignored them. It was fourth down and a football field to go.

Auburn had squandered three quarters of football, maybe its best football of the year, given the opponent and the stakes. But the fourth quarter that followed those three was maybe Auburn’s worst football of the year. The offense was inept. When Auburn wasn’t tackling itself, it was throwing up—or down or behind or in front: anywhere the receivers weren’t. An exhausted Georgia defensive line found its second wind and began blowing through Auburn’s offensive line. Auburn’s defense fared no better. Murray’s short drops and quick passes frustrated the defensive line. Slants and running back passes in the flats left the linebackers and secondary gasping for and grasping at air. Murray became the primary Georgia runner. Georgia asked their quarterback to win the game—and as he lowered his shoulder at the goal line on fourth down, it seemed he had. At least it seemed that way to the referees. An extra point kick gave Georgia a one-point lead. Enough.

Auburn’s offense and Nick Marshall had produced game-winning drives before. All they needed now was a field goal. But it was hard to be confident. If not in the play-calls, then in the results, the feckless remains of Scot Loeffler’s offense seemed to have been reanimated. How could the walking dead run a two-minute drill, a two-minute drill to win, to win this game, to win under this pressure? Too much.

Darkness had fallen. The lights shone. It didn’t matter. The sun had sunk and it would not rise again. Even the lights would soon surrender. It was fourth down and a football field to go.

Marshall had to throw. He could not be sacked again. His usual calm showed signs of strain. He wanted to win, to win this game, against that team. His old team. He was pressing.

Time out and time out of mind. Everything stopped. Malzahn talked to Marshall and called a play. The players took their places. The ball was snapped. Almost the entire Georgia defense fell back to prevent a pass completion. Marshall looked downfield and then stepped up and threw the ball.

Ricardo Louis had mistakenly played defense against his own team, tackling Tre Mason for a loss on what otherwise would have been a third-down conversion. Before that, he had put together a career night. Now, in the gathering gloom, it looked like his night would be remembered only for a mistimed colorblind takedown. He wanted to redeem his time. He told Marshall to throw him the ball. He would make a play.

Darkness had fallen. The ball rose, foretelling sunrise. But Marshall wanted it too much. He threw it too far. Georgia’s defenders, aware of the ball but not of each other—or of Louis, as he streaked beneath the ball—leaped for glory, to make a play that would seal the darkness, put out the lights.

Louis lost the ball. He saw it and then saw the defenders and still kept running. As he passed the defenders, the ball bounced off them (is that the way the ball bounces?), bounced back into Louis’ view. Louis reached out and got his hand under the ball. And then, in an eternal split second, he got his hands on it. He caught it. Complete. He had never slowed down. In a few steps, he scored.

The crowd went silent as the ball went up; all around was silence. The crowd swallowed its silence when the ball was tipped. And then the crowd exploded—not like a volcano, but like the sound of Creation, a big bang.

And then there was light.

The stadium lights shone on, but brighter. The darkness lifted. Louis stood motionless in the end zone, exuding surprise and destiny. Marshall and the referees raised their arms to the sky, a blessing. Not only victory from defeat, but being from nothingness—a miracle.