Like a really bad Halloween costume, you know bad coaching or good coaching when you see it.  It may not be immediately obvious as the costume example, but if you focus on a football team over an extended period of time, the answer is there.

Gus Malzahn and his staff have done an outstanding coaching job this season.

How can we tell (other than the record) that this team is better coached than it was in 2012?

1)     The team is well-prepared each week. The game plan is well tailored to the opponent, takes advantage of what the Auburn players can do, and is adjusted during the game.

2)     The coaches used the bye week after the LSU game to diagnose and fix the team’s problems and to adjust the depth chart accordingly.

3)     Players—a lot of them—have been rotated in at almost every position.  The result is a team with a lot of depth and experience even in the second and third string… and only eight games into the first season with this staff.

5)     This team does not take lesser opponents lightly. It is prepared to play and put them away quickly and efficiently. (Some might say brutally.)

6)     This Auburn team has improved each and every week.  It improves during the game and plays its best football in the 4th quarter of undecided games.

7)     The absence of one particular player does not limit what the team does at any point.  The back-ups are well prepared and can step in and make a difference.  (If we had told anyone before the season that Auburn would go into College Station and beat Texas A&M without two of its starting safeties from spring practice – Garrett and Holsey – no one would have believed it.

8)     The players have completely and obviously bought into what the coaches are doing.  Even Arkansas Coach Butthead-ieliema noted that in his press conference this week: “I think (Auburn’s) execution has gotten better every game, which means that kids are buying into it 100 percent and are executing.”  That’s possibly the most sensible thing he’s said since he packed up and left Madison.

Thoughts on the Florida Atlantic Game:

–   It at leaast appears that Nick Marshall was not hurt badly and is available for Saturday. 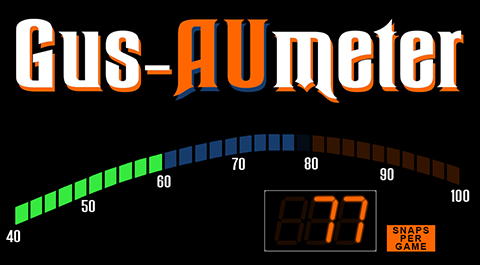 Arkansas:  Will the Hawg Hex Work on the Gus Bus?

At the beginning of the season we were very worried about this game.  Arkansas, we thought, would be better under new coaching–it didn’t seem possible they could be much worse than under John L. Smith– and Auburn, to put it mildly, often has problems in Fayetteville.

But this particular group of Hawgs doesn’t seem very dangerous to Auburn. (Did you know that the proper term for a group of hogs is a “passel?”  We didn’t either. Maybe that’s the problem–they’re a passel trying to learn how to be a runnel.)

How do we know that Arkansas isn’t too dangerous?

–   They have now lost five games in a row.  Their three wins have been over really bad non-conference teams.

–   In SEC games Arkansas is last in the league in rushing defense. (Warning! Warning!  Danger! You may have a problem playing Auburn if your ability to stop the run is actually worse than Texas A&M’s!)

–   In SEC games the Hawgs are last in turnover margin with one takeaway and 10 turnovers themselves.

We typically don’t like to go out a limb based on data alone, but the numbers above indicate a bad football team.  So How can that team possibly beat Auburn?

1)     Early in the LSU game Auburn showed a vulnerability to the inside run.   Arkansas is going to try and run the ball at Auburn, again and again.  If Auburn shuts down this avenue of attack, the game is over.

2)     This Hawg team hung with Texas A&M for most of their game in Fayetteville.

3)     Auburn needs to continue to avoid turnovers as it has in its last three games.   In the first four games Auburn had eight turnovers.  In the four games since Auburn has five turnovers.

5)     Auburn’s defense has given up a fair amount of yards this year but stopped teams short of the end zone.  The Tigers need to continue to tackle well and to force the Hawgs into third and long situations. Once that happens the Auburn defense can come after quarterback Brandon Allen.

If all goes well–if Arkansas is a one-trick pony (pig?) with the run game and the Tigers D can shut that down, Auburn should roll and the Hawgs should find themselves in a whole passel of trouble.

Alabama  (Toughest challenge this season? Keeping their owns fans in the stadium.)

Auburn (Smell that?  Smells like bacon. And the BCS Top Ten.)

Missouri  [choke, choke, choke, choke]  (Will the USC loss haunt them this week and cause them to lose again? And–it’s a different world when a stunned, humble Steve Spurrier doesn’t quite have any snappy quips handy after a big win. He seemed as shocked as the rest of us.)

Ole Miss  (Facing Idaho and a bye week mid-season should help the Rebel blACKBeARs play better down the stretch.)

LSU (Les – you have two more weeks to get this team together before you play Bama. Bring the crazy.)

Florida  (That cocktail drinking contest in Northern Florida now matters.   A little bit. But, as Van and John noted on this week’s podcast, “There will likely be less party and more cocktail this year.)

Tennessee  (Crushed by bama and now starting quarterback is out for four weeks.  And they get to travel to Mizzou.)

Vanderbilt (As we predicted, the Commodores may be a better team than last year but no one will know because the schedule is tougher.  James Franklin is working on his resume as you read this.)

UGA  (Hey, if we get everyone back healthy and everyone ahead of us loses three times we are right back in this thing!!)

MSU  (“There is a new IT guy in my building who looks just like Dan Mullen and I can’t get over it.” —John   “Mullen may want to swap places with him soon.” —Van)

Arkansas (“Where is the missing game film?  Without that extra point tape we have no chance against Auburn!”)

Kentucky  (They really, really should have beaten MSU. They have a solid defense. …Aaaand that is enough deep thinking about UK for an entire SEC football season.)