Hey, I’m Jeremy, and today is Hey Day, a grand ol’ Tiger tradition embodying Auburn’s belief in and perpetuation of its preternatural friendliness.  Revived periodically with varying degrees of vigor, the University’s official “Traditions” page dates Hey Day only back to the 50s, but best we can figure (at least since realizing that hey, it’s Hey Day, late last night), it started at some point in the 40s.

Here’s a shot from the 1948 Glomerata of coeds pinning the requisite name tags on student passersby in front of Langdon Hall. 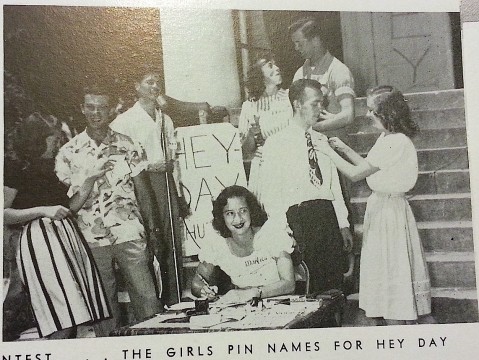 Forty years later, Bjork wrote a song about it. The Sugarcubes, her band at the time, played Auburn the day before Hey Day in 1988. When they were saying “bye”, everyone else was saying “hey.” It left a lasting impression. You can listen to the song here.