Auburn lost to LSU Saturday night. But that doesn’t necessarily means they won’t go undefeated, at least not if LSU gets convicted in the press of paying players and Auburn applies the same standards of defeatedness it used in 1908 (you gotta believe).

That year, 1908, Auburn lost one game, to LSU. Or rather Auburn played a football game against LSU in Auburn that ended with Auburn having only scored two points and LSU (which had been bowling over teams by 30, 50, and 80 points) having scored 10. They were the only points scored on Auburn all season. You can call that a loss if you want, but do consider that on average, LSU’s players were 20 pounds heavier than Auburn’s. And that almost all of them had Yankee accents. And that—wouldn’t you know it—almost all of them were being paid.

Late in the year, legendary sports writer Grantland “He’s No O.B. Keeler But Who Is?” Rice wrote a story alleging that several LSU players were professional, northern imports from other schools, some even playing under assumed names. The resulting S.I.A.A. investigation (conducted a year later) didn’t turn up enough evidence for the conference to do whatever they did to cheaters back then. But 1908 LSU star (and object of Auburn ire) Doc Fenton (whose father was a snake oil salesman) admitted as much years later (implicating Mississippi State as another seeker of his illicit services in the process). Fenton fondly recalling the $70 worth of new clothes procured from the Progressive-era, Baton Rouge equivalent of T-Town Menswear in order to make his transition from tackle, his preferred position, to quarterback more palatable.

Coming as it did  just one season after what the southern football press referred to as The Year of The Ringer—paying players was the only way schools thought they could compete with Vandy… you know, like how Bama had to pay professional boxers to beat Auburn—the resulting scandal lead several papers to proclaim one-loss Auburn Champions of the South, not only because Auburn had given the Bayou Mercenaries their toughest game by far, but because Auburn’s coach, Gentleman Mike Donahue, was famously, famously committed to “clean sports.”

“I wouldn’t be surprised if the newspapers’ award to Auburn wasn’t caused pretty much by the fact that the newspapers knew that Donahue had been fighting a long, arduous, uphill battle for clean football,” legendary sports writer Fuzzy “He’s No O.B. Keeler But Who Is?” Woodruff wrote in his A History Of Southern Football. “It was time he got some sort of reward for his earnestness of purpose.”

Whatever the reason, the Tigers owned the crown. They owned it hard.

At first, it was just stuff like poems in the Plainsman: We’ve beat each team we’ve battled with, except one team of ringers…

UPDATE: And Kevin Bagwell notes that the 1909 Glomerata referred to Baton Rouge as “a noted fall and winter resort for prominent northern college football players.” (Love you, Glomerata.)

But Auburn eventually took the justice-seeking a step further, straight up erasing the game from the loss column (at least for a time—it’s been back for a while) to the point that 1908 was actually included among Auburn’s undefeated season retrospectives published years later in issues of the Auburn Alumnus. 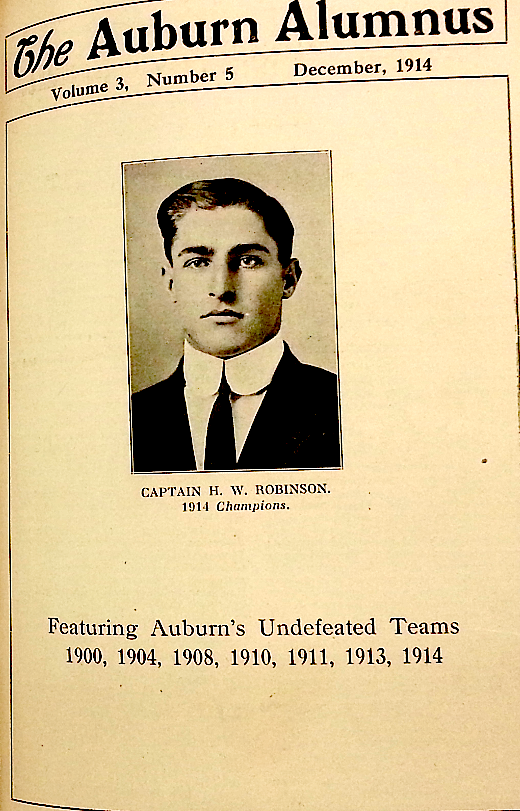 “We won every game that fall except LSU,” Auburn star Walker Reynolds told Clyde Bolton in 1973. “But LSU had a pro team.”

Related: The time an Auburn fan coldcocked an LSU player with a cane, and other fun stories of violence from the 1908 Auburn-LSU game that wasn’t.

* Katy Perry in Auburn
* The greatest thing ever written about Auburn football
* Aubie called as star witness in 1979 trial
* The Iron Bowl according to ‘Big Fish’
* Auburn-educated astronaut wanted ‘War Eagle’ to be first words on the moon
* Show Some Pigskin: An Illustrated Guide to Auburn’s Playboy All-Americans