You almost get the feeling Richard Billingsley is surprised he hasn’t heard from Auburn… not that a phone call to Hugo, Oklahoma, where the college football historian marinates in the minutia of gridirons gone by day in and day out, is required to claim a national championship. The athletic departments from Texas A&M and Minnesota and Ole Miss contacted him before publicly embracing his research (“they were just verifying the information”), but no one at Oklahoma did. The Sooners, says Billingsley, “just saw it in the record book and took it upon themselves”—if not on the side of the stadium, like the Aggies, then at least on their website.

Auburn, he says, should feel very much free—if not compelled—to do the same, phone call or not.

“I remember my thoughts well on the day the printer rolled out that final rating for 1913 because I was living in SEC country at the time in Nunnelly, Tennessee,” says Billingsley, whose exhaustive examination of nearly 150 years worth of college football results earned his computerized Billingsley Report ranking system official NCAA recognition as a national championship selector in the mid 1990s, as well as inclusion in the formula that determines the BCS national champion.

“When I began to see Auburn’s performance, week by week, especially when I got into November, and could see them outperforming expectations in the last three games, it was exciting for me and shocking for me to see what was happening,” Billinglsey says.

Their first five victims: Mercer, Florida, Clemson, Mississippi State, LSU. But those last three games, or at least two games, were shocking for Auburn fans at the time, too—not the winning part, the being scored on. Georgia Tech? 100 years ago, Auburn beating Georgia Tech was like the sun rising every morning—you technically didn’t know for sure that it would happen… but you knew for sure that it would happen, no matter how good a season Heisman’s Ramblin’ Wrech was having. 1913 was more of the same, 21-0. The gist of the Plainsman’s headlines following the Vanderbilt game, however, wasn’t Auburn Wins—it was Vandy Scores. So strong was Donahue’s legendary defense, the mighty Commodores (under offensive genius Dan McGugin) managing to cross the Tigers’ goal line was as newsworthy as Auburn beating southern football’s overlords for the first time in seven tries, 14-6.

The final game of the season, a 21-7 win over Georgia, was even more alarming; the Bulldogs scored… and they scored first. It was the first time Auburn had trailed all season, the last time they would trail or even be scored on for two years. But it  gave Auburn students and alumni the kind of celebration and joy only comebacks can, the perfect capper to a perfect season in which every S.I.A.A. team Auburn destroyed was undefeated in the conference. Until they played Auburn.

“I felt like I was witnessing history being made,” Billingsley says of the week he crunched the numbers. He doesn’t mean Auburn history, he means southern history.

Billingsley says the 1913 Auburn Tigers challenged his own preconceived notions about early 20th century football below the Mason-Dixon line.

“I was very surprised (at 1913’s results), honestly, because it’s hard not to fall into the trap of thinking that eastern football and Big Ten football were dominant.”

The teams that share the 1913 national championship entry with Auburn in the official NCAA record book thanks to other official selectors? Harvard and the University of Chicago.

Auburn deserves it more than either of them, Billingsley says.

“In my mind, Auburn played a harder schedule and performed above expectations.”

Dig as deep into the century-old details as Billingsley has, and you’ll quickly discover that the Tigers’ only weakness was winning and winning and winning in the final days of an era that deemed those wins irrelevant, at least on the national stage.

“There was a mentality that no football was played outside the east or Midwest,” Billingsley says. “If you didn’t play in the Big Ten or Ivy League, you weren’t considered a good team. I think Auburn completely dispelled that because you know what? My computer doesn’t give a darn if you’re playing in the Ivy League or Big Ten.”

Nor, apparently, did Auburn players. Bradley Streit, an All-Southern fullback for the Tigers who led the S.I.A.A. in scoring in 1910, transferred to eastern powerhouse Princeton after two years at Auburn and proceeded to dominate the Ivy League in… 1913. The other Tigers named him their best player, and he set a Princeton record for most points scored in a game by a single player that stood for 54 years.

“Streit has attracted the attention of the football world by his great line plunging, doing practically all of the scoring for the Princeton team this season,” the Auburn Alumnus wrote in 1914.

According to Auburn historian Michael Skotnicki, Streit later said his 1910 Auburn team was far better than his 1913 Princeton squad.

Fast-forward to 1918. Pittsburgh is recognized as national champions, despite losing its last game of the season almost single-handedly to… Moon Ducote, god of Auburn’s 1917 team (which tied back-to-back undefeated Big Ten champions Ohio State) who in 1918 was playing for the Cleveland Naval Reserve. That was the first season after the gridiron’s glass ceiling was finally broken, thanks in part to the promotional prowess of John Heisman. The dominating 1917 Georgia Tech team was the first from the south to win number one nods from newspapers across the country. In recognizing the Yellow Jackets as “the first southern football team to gain national leadership and earn national recognition,” Connecticut newspaper The Day also conceded that the south “may have had great elevens in the past.”

“In fact,” the paper wrote, “to southerners familiar with football both here and in Dixie some of M.J. Donahue’s Auburn teams of previous years have loomed up on a par with the best in this section.”

One more time: “… some of M.J. Donahue’s Auburn teams of previous years have loomed up on a par with the best in this section…”

Billingsley, as well as a growing number of Auburn fans, thinks Auburn University should celebrate the success of at least one of those teams to the fullest extent possible, something beyond three words in the back of the media guide. 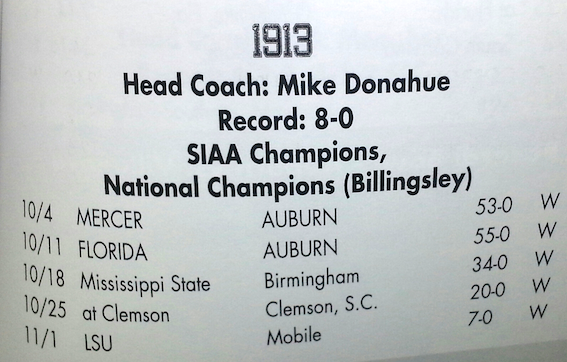 “One thing Auburn’s Athletic Department needs to keep in mind, they really need to know that they have a right to claim this national championship based on the Billingsley Report,” he says.

“When I supplied it (the NCAA) with my info, they printed it in their records book, so at that point, Auburn should have been allowed to claim a national title.”

Oh, and while we’re here…

“Now, I really want to extend that conversation to 1983, because honestly, Auburn was hands down the best team in 1983, and my system awarded them a national championship in that year,” Billingsley says. “So in my records book, Auburn has won four national championships: 1913, 1957, 1983, and 2010. The Auburn Athletic sports information people should be claiming them.”

You can read more about Billingsley’s methodology here. The War Eagle Reader’s book on Mike Donahue and the 1913 season will be available this fall.