Long before the Student “ACT”, there was the dirty, dusty attic of Samford Hall. It was 1891, and George Petrie was trying to convince his friend and then Auburn President William Broun to allocate space for the school’s first gymnasium. Despite reluctance from school’s administration, Petrie eventually convinced Broun to allow him to construct a gymnasium in the newly completed Main Building (Samford Hall). With zero funding, George Petrie worked with an assistant from the mechanic arts department to complete all of the carpentry work in the attic of Samford Hall. 112 students and 16 faculty members joined the attic gymnasium, and pooled together roughly two-hundred dollars to fund the project. Among these 112 students were the members of Auburn’s first football team.

The construction and opening of the attic gymnasium came at the same time that Petrie was attempting to organize Auburn’s first football game. In October of 1891, Petrie set up the attic with boxing gloves, a sparring bag, parallel bars, a horizontal bar, a trapeze bar, chest weights, mattresses, a vaulting pole, gym rings, and Indian clubs from Peck and Snyder Sporting Goods.

Despite their intensive work converting the attic space into a usable gym for students, Broun insisted that “a real carpenter” inspect the equipment before students used it. Petrie later recalled that Broun insisted on so many changes to the gymnasium that not even Petrie’s friends could truthfully give him credit for the gymnasium when all was said and done. Broun was clearly unimpressed with Petrie’s carpentry skills; the president himself never joined the attic gymnasium.

However, Petrie’s enthusiasm and continual lobbying for athletics did convince the Broun to recommend that the board of trustees allocate “a small appropriation” to assist in equipping the attic. The board responded with an “endowment” of $100, the first ever financial support of athletics from Auburn University. The attic gymnasium was advertised in the school catalogue as a space for all Auburn students to exercise “under prescribed regulations.” Auburn publicized the attic gymnasium as a well lit and well ventilated area, though the dark and dusty attic received only the sunlight that came in through the windows, and there was no way to regulate the temperature in the extreme summer and winter months. A student was appointed superintendent and paid a small stipend to supervise the use of the gymnasium. 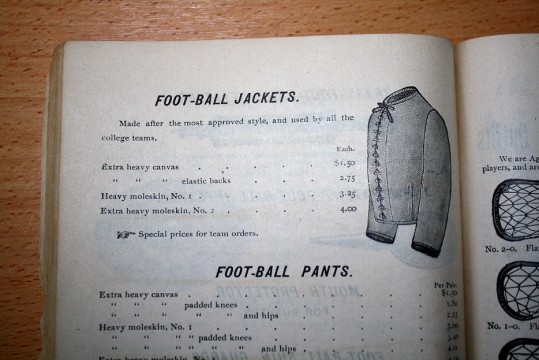 The first gymnasium in the attic of Samford Hall was crucial in developing Auburn’s first football and baseball teams. The space was not used for basketball despite what you might have been told at Camp War Eagle. The world’s first game of modern basketball was played in Massachusetts shortly after Petrie constructed the gymnasium. While it may have existed as a club or intramural sport for a few years prior, Auburn did not field its first varsity basketball team for another 14 years after this time, when Coach Mike Donahue led the tigers to a 3-1-1 record in 1905. By this time, athletics had already been moved out of the Samford attic for a full decade.

Samford Hall’s tenure as the gymnasium of Auburn University was ultimately short lived, from 1891-1895. Not long after the attic gymnasium opened, it became clear to the college’s administration that the gym was causing more problems than they had anticipated. Beneath the fourth story attic gymnasium were most of Auburn’s classrooms as well as the college library. Due to this location, President Broun complained to the board of trustees that it was difficult to keep the gymnasium open for more than “few hours per week”, due to the noise disruptions. Dr. Broun insisted that the school must build an athletic facility “separate from the other buildings” to solve this problem. With the insistence of Dr. Broun, the university which was initially reluctant to give any support to athletics at all, completed Auburn’s first real athletic building in 1895: a $1,848 one-room gymnasium three hundred yards behind Samford Hall.

Perhaps George Petrie initially chose the large attic room out of desperation and a lack of suitable options for a “physical culture” location. Or maybe he had the foresight to realize that having the school’s athletes create a major ruckus in the attic above the college library would leave the board of trustees with no choice but to fund a real athletic facility. Regardless of his motives, Auburn’s attic gymnasium was the small school in East Alabama’s first pledge of commitment to student recreation and wellness that is today expressed in one of the premier student rec centers in the country. And a Tiger paw-shaped hot tub.

Sources: “Auburn Man: The Life & Times of George Petrie” by Mike Jernigan, as well as other primary sources; Catalog photos provided by Brett Lowman at PlayOKAntiques.com.

David Adkison (AU ’12) is a graduate student at Auburn University.

* ‘My national championship for Auburn in 1913 is a very valid national championship’
* John Heisman: Auburn ‘the first to show what could be done’ with the hurry-up offense
* Auburn theatrical legend John Heisman put on, starred in play to save Auburn football
* The first Coke was sold in Auburn? An Auburn pharmacy professor was certain of it
* Auburn cup spotted on ‘Hoarders: Buried Alive’
* Auburn wore green jerseys TWICE in the 1930s
* An Auburn coed and her machine gun
* Leonardo DiCaprio and his Auburn hat are back—this time on the streets of New York