Auburn going completely smoke-free on August 21 will be the culmination of a campus anti-smoking campaign that actually began at Auburn 50 years ago.

However, the edict prohibiting smoking in Auburn classrooms handed down from President Ralph B. Draughon in October 1963 wasn’t intended to combat lung cancer but litter “caused by cigarette butts crushed on classroom floors.” 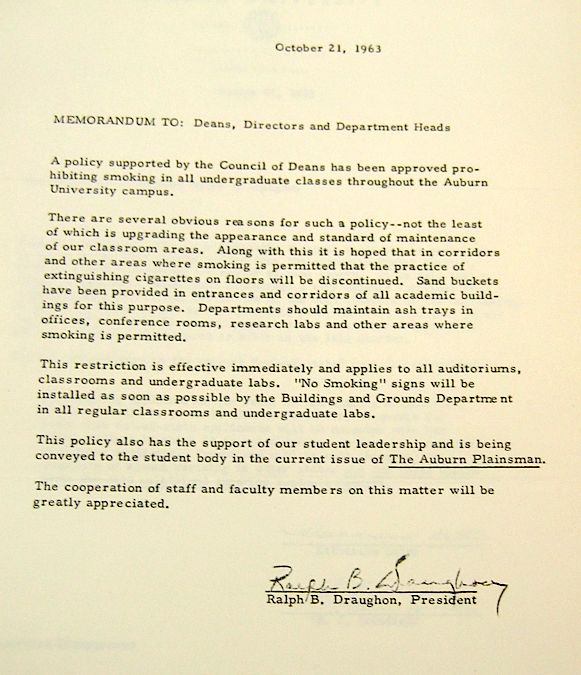 “Although we consider ourselves to be among the most ardent admirers of the magic weed and its phantom pleasures, we must place our stamp of approval on Buildings and Grounds’ ‘no smoking’ policy,” the Plainsman editorialized. “Students have not in any way tried to save floors and desks from the blemishes of cigarette butts.”

And it isn’t as if they hadn’t had a chance. There were ashtrays throughout campus buildings and even some classrooms once upon a time. But, the Plainsman noted, they had “a strange way of being lost or borrowed.”

Like the one on the desk of the girl in this photo… which was taken in Haley Center in 1973, a full decade after the policy went into effect. That’s the thing about no-smoking policies—they’re hard to enforce… especially when they’re unevenly applied.

Did we say Auburn classrooms—we meant all undergraduate classrooms. PhD candidates and administrators could still smoke like chimneys in their offices.  (God knows it was still allowed at the athletic department—they didn’t call him Secondhand Shug for nothing.)

And that the Plainsman did have a problem with.

“It hardly seems feasible to believe that graduate cigarette butts create any less a problem than do those of undergraduates,” the paper wrote.

“We are fully aware of the arguments that eulogize the maturity of graduate students. Does this necessarily imply that they are any better handlers of cigarette butts? We think not.”

Related: Auburn’s campus goes smoke-free August 21—but can the policy be enforced on gamedays?