The Auburn Tigers wore orange jerseys in five games in 1938. They lost four of those games. So in 1939 they went back to what worked, what they wore in the games they did win in 1938: Green jerseys.

2007. David Housel’s wonderful “Auburn Football Vault” is published. I buy my copy at a Lee County Auburn Club meeting. I think Al Borges is speaking. Housel signs it. I read it.

From the section on Jack Meagher, a former Notre Dame player, and Auburn head coach from 1936-42:

“Most of (Auburn’s) coast-to-coast games were played against teams coached by other former Notre Dame players and coaches. A fraternity of sorts, they liked to play each other to see who could best carry on the glory and honor of Notre Dame. Meagher dressed Auburn in green jerseys for an entire season to emphasize his close ties with the Fighting Irish.”

Wait—what? Green jerseys? What? Green? What?

It’s not a misprint. But how can it be true? And which entire season exactly? Even in a college football era with an Irish fetish, it just seems weird. How have we never heard about this? I mean, this isn’t a going from blue to orange situation. This isn’t just switching one team color for the other team color. This is switching one team’s color for another team’s color… for “the glory and honor” of that team. It’s borderline blasphemous.

No, it is blasphemous. And a dark mystery. I put it away in the vault. Try to forget about it. Keep it quiet.

January 2013. Bama is playing Notre Dame for the national championship. TWER looks to give moral support to the Irish (kiss me I’m Auburn). Perfect—here’s an Auburn fan at the 1976 Notre Dame-Bama game. Is there anything else we can use… wait–the vault! At least for a day or so, I think I might not mind so much. Maybe. But I have to make sure it’s true, or rather, I have to figure out what we’re actually dealing with. I haven’t seen any other reference to green jerseys since 2007. I need primary sources.

“Hello, Jeremy, what do you need?”

He gives me the spiel from the book. I press on.

“But do you know what year? Just seems to me that would be a big enough deal to be noted, recorded, remembered, rebuked.”

Housel: “You should talk to David Rosenblatt.”

Rosenblatt: “You should talk to David Housel.”

I hang up from the Davids—Housel the former sports information and Athletic Director, Rosenblatt the former director of the athletics museum. Rosenblatt says something to the effect that there may have been a green jersey on display there once upon a time, but you know, maybe it was a replica (“and you’re right, it is strange there’s no year listed”)… and maybe there was video with one of Meagher’s Marauders talking about it somewhere… and after talking with him I’m even doubtful that whatever truth there is to the whole green jersey thing actually includes actual Auburn players actually taking the field in actual green jerseys for an entire season. The only other thing out there is this echo from Housel’s 2006 lecture on the history of Auburn football:

But what worked its way through? And how? And why? My theory: Maybe there had been talk of it. Maybe one was even made, a mockup (and maybe ended up at Auburn’s athletic museum). Maybe Meagher really wanted them, but the idea was shot down. This was my theory.

If only there was a quote that could prove it from a random 1986 Plainsman interview with Babe McGehee, that old player from the ’30s whose awesome name you run into everywhere when you start researching Auburn stuff…

“In 1939… at one time, Meagher brought out green uniforms with orange stripes and numbers. ‘We didn’t wear those too much,’ McGehee said, ‘The team objected.’”

I’m a genius. Possibly psychic. There were green jerseys once upon a crime— and since Babe did most of his gridding in 1939, we probably have the year—but they “didn’t last long” (and surely not “an entire season”) because the players didn’t like them, “the team objected”… you know, because they were green. Maybe they didn’t even make it out of the locker room.

May 2012. I go on the radio. I tell it on the airwaves. Over the hills and everywhere. Identity crisis averted, Auburn fans. Thanks to Babe McGehee. Now for the Internet.

So many thoughts… so many thoughts run through my head: What, Mr. Glomerata? When the average fan sees a blue breeked and green jerseyed Auburn varsity eleven trot onto the field, he should freak out. Because they’re green jerseyed. Wait, Babe—“didn’t last long?” Were you speaking relative to, like, the 1939 season, or the entire history of Auburn football? Because it was apparently long enough to make the words “green jerseyed” show up in the very first sentence of the yearbook’s football section.

Two days ago. We finally have a year, a green year—1939. The search for the truth in the Plainsman has been narrowed. I grab my Diet Coke and settle in.

September 1939. Auburn junior Boots Stratford is killing it with his Tiger Tales column for the Plainsman. The Orange and Blue are a week away from their season opener against Birmingham-Southern. Time for a preview. 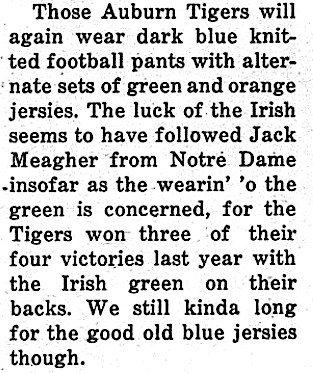 Deep breaths. At least it’s alternating, I guess. But… again?

October 1938. Auburn sophomore Boots Stratford is killing it with his Sports Chatter column for the Plainsman. The Orange and Blue—he says “the Orange and Blue” more than anything, the irony never registering, at least in print—are two games into the new season. But something’s different about them. Why?

Me, too, Boots. Me, too. And Lord, there was no announcement! Poor Boots just had to wait another year and deduce the whole “must be the luck of the Irish” thing when he saw it happening again.

And do you know why they wore them against Manhattan and Tulane? Well, because we couldn’t have two green teams on the field now could we? 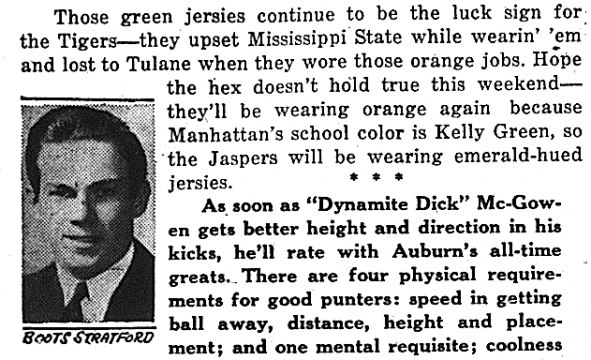 November 30, 1939. It’s the first game in Jordan-Hare Stadium (then Auburn Stadium), homecoming vs. Florida. The first touchdown scored in Auburn Stadium is scored by Babe McGehee–of course. Does he object to the color jersey he’s wearing?

December, 9 1939. Boots Stratford and his friends wake up at 9 a.m. in a cheap lodging house and head out into the streets of Knoxville in search of orange and blue streamers “with which we did adorn and bedeck our coach amidst the jeers and ribaldries of passersby.”

(Coach Jack Meagher, Notre Dame man, adorned and bedecked in orange and blue. Can you imagine it? What would the other Sons of Rockne think?)

The Orange and Blue almost pull off the upset against the Rose Bowl-bound Volunteers. As the Tigers take the field, Boots is overcome with pride in “our own blue breeked and geen-jersied team…”