They weren’t expected to go up until just before football season. Auburn’s Public Works Department apparently didn’t get the memo.

“Public Works got them in earlier this morning,” said Auburn City Manager Charles Duggan, speaking of the concrete poles on which the city will string a system of wires for Auburn fans to roll in lieu of the Toomer’s Oaks this fall, and possibly longer. “They had the contractor ready to go.”

City workers began installing the poles this morning: one behind the white rock in the College Street median between Compass Bank, one in the landscaped area in front of the entrance to Toomer’s Drugs, and one in front of the Bank Vault. Duggan says it may be a little while before the poles are strung with wires—and he’s not exactly sure what kind.

[UPDATE] Here are photos of the wires being tested.

“We were looking at some different solutions this morning as to what kind of wires might work the best,” he said. “We may end up putting up some and making sure they look good and will do what we hope they’ll do. We may have to do some tweaking.”

Duggan says the poles themselves may also get tweaked, at least aesthetically.

“Depending on how they (the poles) look when they’re up we may end up painting them. Or doing something else to them. It’ll be a while before they’re in their final state.” 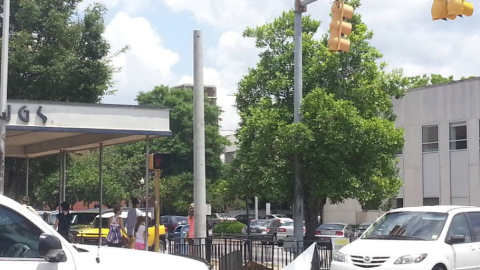 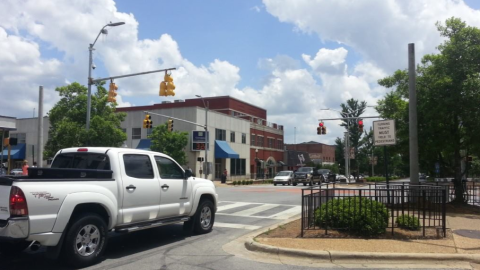 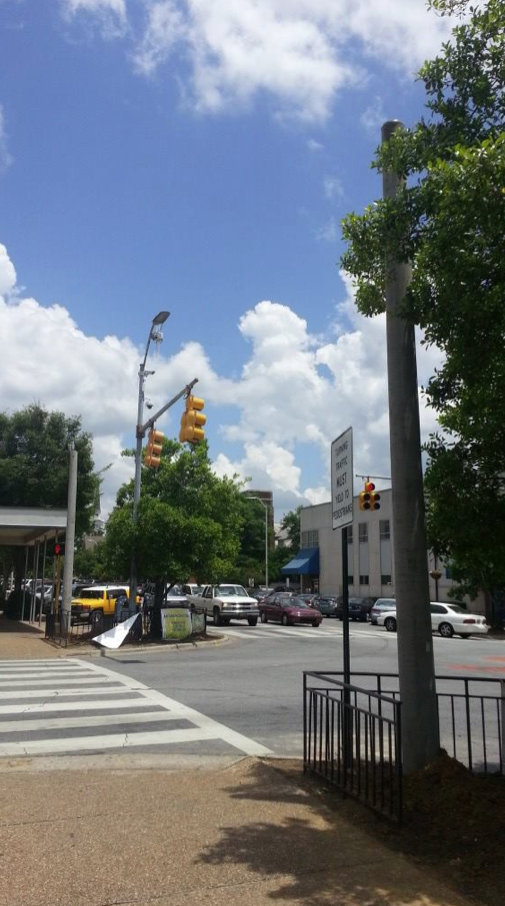 As TWER first reported in March, the triangle of poles and wires will once again center celebrations in the middle of the street. Which means that rolling the corner—any rolling of the corner—would require closing the streets. Unless we’re talking football, that’s not likely to happen.

“It’s different than they way things things have been operated in the past,” Kevin Cowper, Auburn’s Assistant City Manager, told us earlier this month. “I think the general operation is going to be if there’s a home football game and an Auburn victory, then the streets will close. I think that’s pretty much a given. But beyond that, I don’t know. For other folks wanting to roll (after a minor sport victory), that’s just really not going to be an option.”

That means that until new trees are planted away from the safety hazards of downtown traffic, every rolling of Toomer’s Corner will for several years likely have to be a planned activity instead of what it always was, or at least was meant to be: A reflex. At least seemingly.

“I guess we don’t know what’s going to happen, but the bottom line is that it seems there’s strong sentiment in the community for us to provide some means of continuing the rolling tradition at Toomer’s Corner,” Cowper said. “This (the triangle) is what we’re trying to do to respond to that. Hopefully it’ll work.”