According to Sports Illustrated, Auburn resident and totally legit tennis star (ranked 54th in women’s singles) Jamie Hampton’s “gritty, gutty, gallant” performance against Lucie Safarova this morning “capped the most successful French Open first round for Americans in a decade.”

But first round upsets of higher ranked players in grand slam events is nothing new for the Auburn High School grad. She’s done it a few times. Heck, last year she did it twice. Wimbledon. Australian Open. Maybe you’ve heard of them? They’re kind of a big deal. People know them. And she made it to the 3rd round of the Ausie Open again this year. You know, just ‘cause she’s good like that.

And now here she is at The French Open (which, inexplicably, they named after some pilot named Roland Garros. What is up with the French? Can somebody get a line on these people?)—Jamie Hampton: Slayer of High Seeds.

Sure, she may not have attended the greatest university on the planet, but even ESPN tennis geek Chris Fowler knows that the goodness of Auburn rubs off on those who grow up in the Loveliest Village on the Plain: 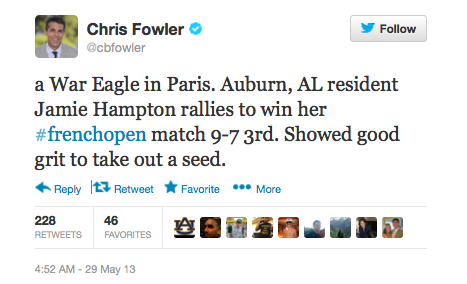 Here’s a Q&A SI did with her the other day.

Rich Perkins hosts The Drive, a weekday sports call-in show heard in Auburn on ESPN 106.5 and around the universe at espnau.com. He also has a little blog he occasionally updates with things that mostly amuse only him. Also, he thinks the movie Diner is one of the greatest movies of all time. Don’t ask.