Sometimes, no matter what journalism school or conventional writing etiquette tells you, you just have to come out and say it.

Sometimes there isn’t any other way to describe it.

This weekend was one of those times.

The Auburn Family rolled the trees at Toomer’s Corner for the final time this weekend, as tens of thousands gathered Saturday to bid the legendary oaks one last goodbye as part of this year’s A-Day festivities.

A record-breaking crowd of 83,401 showed up at Jordan-Hare Stadium to witness the unofficial debut of Gus Malzahn’s new-look Tigers in the annual spring game, sending officials into a frenzy at the stadium gates and concession stands amidst the unexpected turnout.

Then most of those fans, if not all of them, if not more of them, headed to Toomer’s Corner to send off the oaks with the tradition’s biggest rolling ever.

It was a celebration marked by thousands of beaming eyes and unbridled smiles. It was a joyous affair, honoring the end of an era, the beginning of another, and the collective spirit enduring it all.

There was a marching band, and a flag line, and a mascot, and a helicopter. There were bright colors, camera flashes, loud shouts, and even louder music. Mothers were with daughters and fathers were with sons. There was a rock ‘n’ roll band on stage playing “Sweet Home Alabama.”

And there was toilet paper. Hundreds and hundreds of rolls of toilet paper, turning the two green-less, wounded oaks into towering white wonders. It draped over street signs and sprawled over trees up College and down Magnolia, and found itself everywhere green in between.

On the ground it was up to your ankles, sometimes to your knees, and above you it dangled, just over your head. It was everywhere you looked, and as far as you could see.

Today, most of that paper has been removed, and crews are working to bring down the trees. 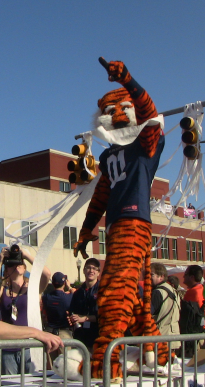 So ends a chapter in the story of one of college football’s greatest traditions. And while the images from the corner may seem bleak today and in the days to come, Saturday is the day that will live on in digital archives and through local historians. The story that will be told is a story of resilience, and a fighting spirit.

This all came about through an infamous act of malice, and yet you wouldn’t have known it if you stood on that corner, between those trees, celebrating on that bright and sunny Saturday.

You don’t have to be an Auburn fan or a fan of sports at all to appreciate that.

It is why this thing we call sport is the greatest, most unifying thing in the world. Saturday was just a small example of how people can face adversity, and overcome obstacles, together. It’s not just about the thrill of victory or the agony of defeat, but also the swelling pride of overcoming and moving forward.

It’s a microcosm of our world, and every day it breeds hope that all people can get through anything, together, on the same team.

On Saturday, that Auburn Family proved that it won’t miss a beat, and that Tiger fans will be rolling oaks at that street corner for as long the university stands.

All week, everyone has been careful to say that Saturday was the advertised ‘Final Rolling’ of the oaks, not the corner, because this tradition will live on. And while some Auburn people are concerned, thinking it may never be the same, I’d bet my ridiculous tuition that Saturday just raised the bar for the next time fans take that victorious, evening walk from Jordan-Hare to Toomer’s Corner.

But, each time, after every Auburn win, it’s something like that.

And to think, that ‘Final Rolling,’ the biggest and best one yet, that ultimate example of unity and one of the Auburn Family’s finest moments, all came from that act of malice after 28-27.

So here’s to Harvey, the man that said he had just too much Bama in him.

On Saturday, the Auburn Family showed just how much Auburn they had in them.