Rolling Toomer’s? There’s an app for that. Or at least part of an app.

The “Roll The Auburn Oaks” game (originally called “Roll Toomer’s Corner”) for iPhone and iPad that we’ve reported on since May 2012 is finally available for free download, but only as part of a new app developed by Auburn’s Division of Student Affairs which was released Monday afternoon.

The app—you can find it by searching “Auburn Student” in Apple’s App Store; it’s currently unavailable for Android—has five additional features intended to enhance Auburn’s student experience, including a student organization finder that matches a users interests to campus groups using an algorithm that improves the app’s recommendations the greater number of students that use it.

“One of the things we’re trying to do with the app is to get students involved on campus,” says Eric Savage, who heads up student and media initiatives for the Division of Student Affairs. But Savage says alumni and fans should enjoy the app as well.

“Basically the goal was to encompass everything that makes people cheer and cry when they think about their time at Auburn.” 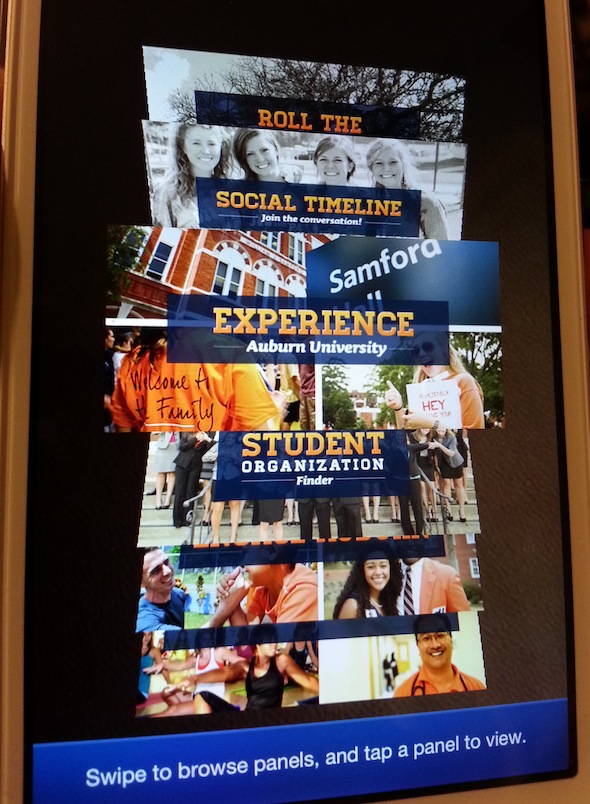 To that end, there’s the “Experience Auburn University” feature,  a virtual catalog of Auburn traditions complete with videos of Auburn’s pregame eagle flight and Samford Hall’s noon playing of the Auburn fight song. And of course there’s rolling a pretty realistic Toomer’s Corner with the swipe of your finger.

Savage can take some credit for the game’s visuals, which feature the Toomer’s Corner eagles statues, Biggin and Hargis Halls, and even the orange Tiger Paw in the intersection of College Street and Magnolia, all rendered using actual photographs of the corner he took. And Auburn fans will be able to aim their smartrolls at oaks digitally restored to their pre-Updyke lushness. And maybe eventually even Updyke himself.

Savage hopes an upgrade to the game will soon be available that would let players “earn badges or credentials” (as originally conceived) and allow for progression through levels that could possibly feature “a little Harvey Updyke running across that you can try to hit.”

Related: Rolling Toomer’s? There’s (another) app for that.